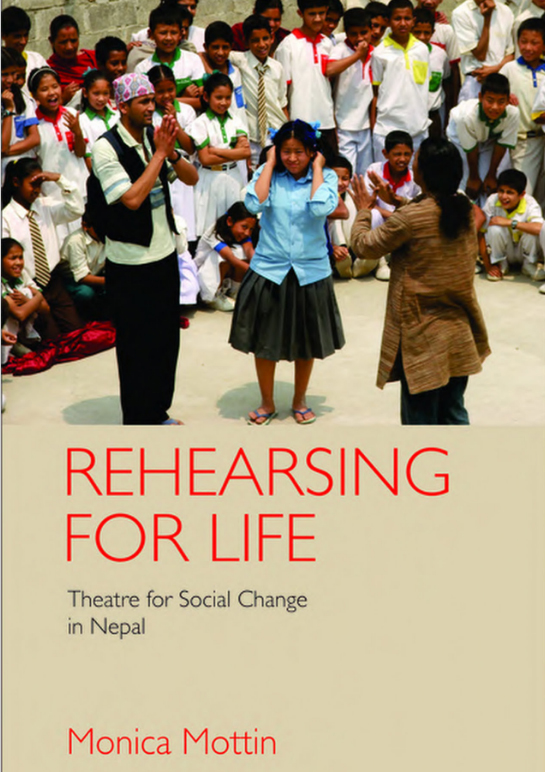 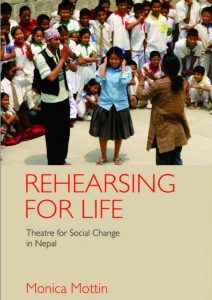 Theatre has been the oldest art form known to humankind—an art form that surpasses class barriers to facilitate an egalitarian representation of community’s aspirations, ideas and responses. In fact it is an evocative medium that articulates the identities of societies all over the world. As Monica Mottin remarks, her intent is to probe how reflectivity and ambiguity can allow for the aesthetic space to become a transformative space. Rehearsing for Life: Theatre for Social Change in Nepal is a scholarly work, which explores the various genres of theatre in Nepal as well as their association with specific groups.

The author, in seven chapters, maps the evolution and progress of Kachahari natak (forum/street, theatre), Lokatantrik natak (theatre for democracy), and Krantikari natak (revolutionary theatre), the last being a part of the Maoist movement in Nepal. The work also mentions in detail, the funding tribulations faced by theatre groups, to deal with which the Aarohan Theatre Group, a Kathmandu based professional company, stages donor funded projects.

The text traces the history of evolution of theatre in Nepal and points to an interesting contradiction. Theatre in Nepal received royal patronage till the 18th century, wherein kings authored plays and performed too on platforms known as dabali or dabu located in the vicinity of palace, temples or the centre of a locality. However, this stopped by the 19th century. Though political power was legitimized through rituals and worship, theatre ceased to be an integral part of this new dispensation. It was only with the beginning of the 20th century that winds of changes were witnessed, with increased performing arts influences coming from across the borders, like India. The chapter titled ‘Theatre and Life’ provides an extremely interesting account of the transformations occurring in Nepali theatre throughout the 20th century. From its association with the National School of Drama from India to the role of the Aarohan in adapting the works of Sophocles, Sartre and Camus for Nepali audience, the chapter is rich with details of Nepali playwrights.

Street theatre as a voice of the people has been a major arena all over the world. It is a Russian art form and arguably the oldest form of acting in the world. In India Habib Tanvir and Utpal Dutt were involved in street theatre or Nukkad Natak in the 1940s and 50s; Safdar Hashmi popularized it through his organization, the Jana Natya Manch or Janam. Widely regarded as the Father of street play he used the medium to critique the government and its policies during the turbulent years in the 1970s. Street play as a form took off from then on in India. The chapter ‘Spacing out to Speak Up’ in the present text is a tracing of the political and cultural activism of theatre in Nepal and its stand-off against the government. The author weaves a fascinating, complex fabric of politics, political transformations, royal coup and its friction with the natak tradition, where religious texts were read and enacted, drawing a parallel between the evil power and the virtuous ideas of people. It makes an interesting read as it spans from the1960s to the concluding decades of the 20th century. Of special interest is the role played by the intellectuals in the 1990 revolution.

The writing assumes a lyrical tone in ‘The Streets Become the Stage’. There are two interesting juxtapositions in this unit. At one extreme the state and the royal family is using the street to create a ripple effect of the image of a benevolent monarchy, through slogans on banners and bill boards. The author creates an analogy of the street becoming a stage for the people’s protest, janandolan. At the other extreme is the ‘performance of dissent’, carried out by not just Aarohan but by groups such as the Sarwanam Theatre Group, who sprang up with their metaphorical play We are Looking for Spring. This was the Loktantrik Natak tradition at its best.

Theatre has always flourished at its most intense phase, during political chaos, and when institutions are falling apart. This heightened sensitivity and activism are not related to economic well being or stability. Rather it is marked by its absence. This has been true of theatre spaces all over the world. Though theatre does involve with issues of development during periods of stability, the insatiable romantic appetite for revolutionary change becomes muted during the chaotic environment. The fourth chapter ‘Kachahari Natak’ is more tranquil, getting off from the breathless pace preceding it. Issues of child labour and workers’ rights are the new anthem for theatre groups, which considering their importance, are yet to find their niche.

The first decade of the 21st century brought with it the problem of financing for the groups, which is detailed in the chapter on ‘Activism Not Development Work’. The author traces a dichotomy: what is perceived as development by donor agencies, the activists and artists prefer to term as movement or andolan. Building a broad theoretical framework for her argument, the author successfully demonstrates the interloping influence of art in connecting policy and people. The essence of this part of the text is the issue of the practice of Kamlari or female bonded labour and the liberation movement associated with it. However, the liberation was caught in the crossfire between the Maoists and the state, wherein the former interestingly blocked all developmental programmes and awareness camps in their zone of influence. It is here that the theatre tradition of Nepal Krantikari Natak begins and it was meant for the Maoist revolution to reach its conclusive end. Dominated by artists, writers and party cadres, this phase is a repetition of the well-established Leftist methodology of using performing arts as a political tool. By locating the artist within the party ideologues and by looking at their propaganda mechanisms within the ambit of street theatre, the author reorients the narration clearly. The strength of this work lies in capturing the appearance and disappearance of worlds dominated by ideologies, through the prism of theatre. Written lucidly, with the right balance between theoretical framework and descriptive analysis, this book definitely makes an absorbing read.

SP Vagishwari is a Professor in Department of International Studies and History, CHRIST (Deemed to be University), Bengaluru, Karnataka.