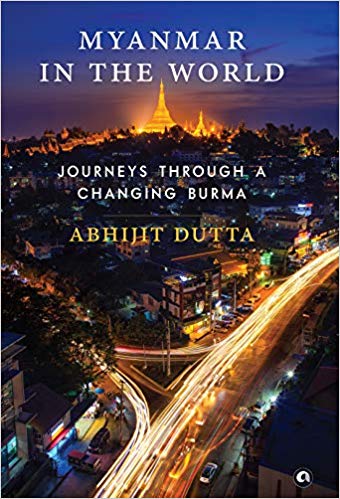 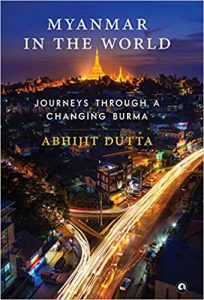 Not many Indian writers have written books on Myanmar in recent times touching on its political history. Amitav Ghosh’s classic Glass Palace, even if in a fictional setting, brought to us graphic pictures of colonial Burma. Sudha Shah in her book The King in Exile gave a poignant account of the troubles undergone by King Thibaw, the last King of Burma, who was deposed and exiled by the British to Ratnagiri in India, with his Queen and descendants. A few Indian academics and former diplomats have also written books on relations between India and Myanmar. Abhijit Dutta’s most recent book Myanmar in the World falls in the genre of a research supported account of happenings in that country but in the form of a travelogue. It is a commendable effort by the young author.

Dutta’s book is the outcome of observing the fast-changing events in Myanmar over a period of six years from 2012. Smitten by the country after an initial visit coinciding with the by-elections in which Aung San Suu Kyi and her National League for Democracy (NLD) Party were taking part for the first time, after long periods of house arrests, the author made repeated visits to various parts of the country and its historical towns. He has drawn material for the book based on meeting people, understanding their regional heritage and religious identities and listening to the past glories and disappointments of the communities. It is however more than a simple travelogue and has in fact avoided giving too much attention to ‘touristy’ places. In its own style, the book has analysed the key issues facing the country and what may be the outlook for the future.

Myanmar is a relatively large country with a land area that exceeds the combined area of India’s six southern States. Its population at a little over 50 million is however less than that of either Karnataka or Tamil Nadu. The Bamar Buddhists are in a majority but residing mainly in the middle and lower plains of Myanmar. They are surrounded by ethnic groups that follow mostly either Buddhist or Christian faiths who have settled in the neighbouring hillsides in the form of an inverted ‘U’.  The resource rich country has been striving for internal peace and stability ever since Independence but ethnic rebel groups are still active in several borderlands. These have unfortunately not dissipated with the move to what may be described as a quasi democracy (the country’s constitution calls it a disciplined multi- party democratic system) since 2011.

Dutta’s book takes us to some of these ethnic problem areas, the Rakhine State on the West, the Karen State on the East and the so-called green borderlands in the North East. The book also tries to better understand the Rohingya issue (we are constantly reminded that it is seen as a ‘Bangli’ issue by the locals) that has taken away much of the world’s earlier high regard for Aung San Suu Kyi. External factors, particularly China’s growing influence and its projects receive scrutiny. Dutta also delves into the Indian presence. Most interestingly he examines the options before Aung San Suu Kyi as she faces challenges of ‘epic proportions’.

In the second chapter of his book titled ‘A Country Full of Capitals’ Dutta has dwelt at some length tracing the history of various Bamar dynasties that ruled the country, their proclivities and priorities, their penchant for shifting to new capitals, and the significance of pagodas and stupas that were left behind as merit making heritages. Why did Myanmar kings glorify their reigns with such actions? King Mindon for example founded Mandalay as the new capital in 1857 and began setting the entire Buddhist Tipitaka in 729 marble tablets that is known today as Kuthodaw Pagoda. Dutta notes that such actions to protect the Dhamma and upholding Buddha’s sasana provided the basis for building empires, the perpetuation of the sasana twined tightly with the perpetuation of the kingdom.

The third chapter on developments in the Rakhine State is also the longest. Several aspects at play here require to be grasped. There is for instance a popular conviction held by Rakhine Buddhists that they get systematically discriminated by their Bamar counterparts who have been largely running the country. Their relative backwardness shown by the lagging development indicators of the Rakhine region, the inadequate attention given to revival of tourist attractions like Mrauk U as opposed to Bagan, and how most of the revenues from oil and gas from the Rakhine State go elsewhere, are grouses often cited to reinforce their charges. This feeling of discrimination perhaps also owes its origin to the defeat of the Arakan King in 1784 by a Bamar Prince with the latter also taking away the most sacred Mahamuni Buddha image from its installation in Dhanyawadi in the Rakhine Kingdom to Amarapura, and has carried on.

Readers of the book will also find the complexities surrounding the ‘Rohingya’ issue dealt with in some detail including how this term may have evolved and why the usage of this term is also bitterly opposed. It is interesting however to note that there were periods in history when there were also movements of Arakan peoples to what are today Chittagong and Cox’s Bazaar in Bangladesh. Even in post-Independent Myanmar, Dutta finds that Prime Minister U Nu declared they were an indigenous ethnic community.  While Dutta’s local Arakan Buddhist interlocutors would appear to have none of that and point out how these ‘Banglis’ were not behaving properly as ‘guests’. Equally there are also local affirmations that the problem needs a political solution not a military one. A lesson from colonial history may perhaps be relevant here. If Myanmar is looking for economic revival of this region, settling the issue early with quick return of those who fled and putting to productive use the resultant labour and spirit of enterprise may be a way forward. It would usher in economic development and help build peace and enable the Rakhine State to return to its past glory.

Dutta also chronicles the interactions he has held with a wide cross section of people of Indian origin whose forefathers came to the country during British rule and are today in some local occupation or another. More critically, Dutta observes that India has no real place in the emerging narrative of Myanmar as a strategic and economic player. Stating that trade is minuscule, investments are woeful and projects are massively delayed, he rues that the more substantive, if unfortunate, cooperation is focused on internal security in the North East. At another point in the book Dutta refers to the ‘small’ equity share of ONGC and GAIL in the offshore gas production as hard earned but adds, ‘behind it lies the story of India’s betrayal of the Burmese democracy movement in 2009’.

It will be difficult to agree with these summary assessments. It may be more appropriate to see India’s economic engagement as work in progress but the point that the Indian private sector needs to work with greater energy in tapping the emerging opportunities next door cannot be disputed. Geographically, India is better positioned vis-à-vis Myanmar than many other countries and the Indian private sector should be pushing the government in taking up facilitatory issues where necessary with the Myanmar Government. Equally, the need for India to rapidly develop the connectivity corridors it is building in Myanmar and then try transforming them into development and commercial corridors cannot be over-emphasized. But to belittle the importance of the work on promoting security cooperation in the North East or to suggest that India should not have sought participation in Myanmar’s energy sector at the time it was done betrays insufficient understanding of issues and priorities.

China finds ubiquitous reference in the book as can be expected from its looming presence in trade, investments and infrastructure projects in the country as also in the rising presence of the Chinese community. Dutta is told that when it comes to dislike for the Chinese, the masses are united. This is even as the Chinese are working on improving their image in the country. China’s support for ethnic groups like Kokang and Wa is also seen as a threat to the country.

Dutta tries visiting the Madae island where the China National Petroleum Corporation (CNPC) has developed the port and pipeline infrastructure for transporting the Middle East gas and crude over land across Myanmar to Yunnan province in China. But he had to turn back because only Chinese people are allowed on the island. After however visiting the controversial Letpadaung copper mine owned by the Chinese company named Wanbao, Dutta concludes that the fault did not lie with the Chinese company in terms of falling short on environmental or other grounds. The controversy blew up more on account of the utter lack of institutional capacity in Myanmar. On whether Myanmar can take investment decisions in its own interest is a question posed by the author. He thinks a beginning has been made and here he quotes the suspension of the Myitsone Dam by President Thein Sein in 2011 (there are clear moves afoot for revival now) and the decision by the NLD government to revise the energy master plan prepared by the earlier government increasing sharply the share of coal in the energy mix.

As for the troubled borderlands between the two countries the overall assessment he gives is that of two-faced friends with Myanmar taking whatever it needs without bowing too deeply and China encouraging peace along its frontier but never fully cutting out the ethnic armies from its feeding tube. With increasing assets in Myanmar, China can be expected to maintain and enhance its leverage potential, not reduce them.

The book carries an epilogue captioned ‘Fighting Peacock’. It gives a sympathetic review of Aung San Suu Kyi’s role as a politician—the author calls her a spiritual politician with a great capacity for compassionate love and kindness—and the principles she has followed in governance within the various constraints posed by the role of the military and the constitution. He further hopes that Suu Kyi will continue the work of quiet change—not with flashy rhetoric but quiet negotiation. While all of this is understandable, what is not clear is the lack of a capable second line of younger leadership in NLD that Suu Kyi could have put in place during all this time and the lack of delegation that is often felt. More progress could have also been made on areas free from constitutional constraints.

Looking to the future, Dutta poses a question as to where Myanmar would be a decade from now and answers himself that it will depend in a great measure on Suu Kyi’s survival and success. That answer could have been more certain and more reassuring if she had put in place a well honed younger team that would have been able to carry on her political struggle with energy and vigour guided by her touch of loving kindness and compassion.

VS Seshadri is a former Ambassador to Myanmar.