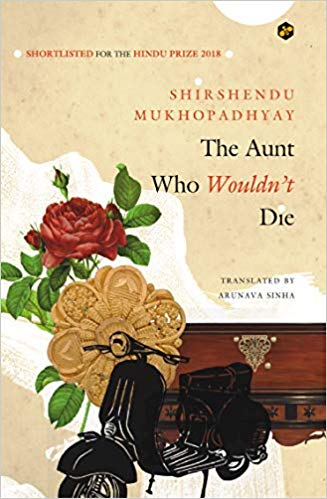 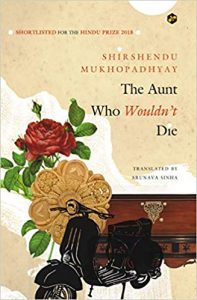 Shirshendu Mukhopadhyay’s Goynar Baksho is a Bengali novel about the ghost of  Pishima. Married at the age of seven, widowed at twelve, Pishima lives in three rooms of her paternal house and owns a jewellery box. The possession of this box after the sudden death of Pishima pushes the plot until the ghost of the dead Pishima forces the innocent newly-wedded bride, Somlata, to hide it in her room. Somlata thereafter is able to set up two shops, and rescue a decadent zamindari-family from the throes of bankruptcy. Set in the decaying feudal household of an East Bengali zamindar, Goynar Baksho traces the trauma of the loss of estates during  Partition, the unfamiliar adjustments of  egoistical men, the economic and social spiralling that landed gentry enters into once they try to learn to trade, and eventually the modern college-educated world of Somlata’s daughter, Boshon.

The Aunt Who Wouldn’t Die is the English-translation of Goynar Baksho. Here the shift from ‘Goynar Baksho’ (the jewellery box) to ‘The Aunt’ (Pishima) in the title is a deliberate signposting of the protagonist in the text—the novel belongs to Pishima, and not to the jewellery box. Pishima desires mutton, shuntki maach (dried fish), men, sexual intimacy, and plots extra-marital affairs of young brides. This is a novel about the ghost of the child-widow who learns to curse, live with, empathize, and terrorize the world of the living. Sinha then is not translating a novel about the zamindari-grandeur, but providing an afterlife to the Pishima who curses with ‘Omaago’, ‘Eeech’, ‘Maagi’, ‘Eyh’. But can Pishima from an East-Bengali mofussil be translated into the pages of an English speaking world?

The word ‘translation’ means anubaad (exact repetition), rupantar (change of form), bhashantara (change into another language), tarjuma (biography), vivartana (transforming), and is never simply an act of retelling, a transaction or an exchange. It is all of these, and a process that itself stands for a certain category of change. Sinha’s English translation attempts to perform each of these roles. This new English version communicates Mukhopadhyay’s story to the global English-speaking reader. Mukhopadhyay’s thoughts on Partition, the decadent men who kept mistresses and lied to their wives, individual and social duties, ethics, and love reach the contemporary facebooking-reader in easy, crisp and lyrical prose. Pishima, Somlata, and Boshon’s personal stories reflect the political histories of their times. The intimate details of conjugality work in tandem with the changing roles of women and feminine spaces. Longing and desire are as much matters of Mukhopadhyay’s plot as trade and commerce.

But there is something new in Sinha’s version. To a non-Bengali speaking reader, Pishima’s world is brought closer and made accessible, linguistically and socially. Sinha makes the contemporary reader inhabit the erstwhile zamindari world temporally and spatially. With the sharp critical lens of an analyst, he engages in a dialectic process of re-telling. He does not erase the historical specificity of the story. The reader hears Pishima’s voice constantly cautioning, comforting, cursing, and critiquing. This voice, alerting and teaching the reader, never sounds reverential and sacred. Pishima cautions on what she thinks as the nonsense of ‘paap punya’ (sin-piety). Sinha brings Pishima into the modern world and the reader to the early twentieth century. And Sinha does not achieve this by rendering Mukhopadhyay’s novel in a non-fluent English. Writing in an immensely accessible English language, Sinha translates the ghost, her pain, and the bequeathed jewellery box into an intimate exchange between a knower and a listener. Sinha performs ‘translation’ beyond what is a transaction between two languages, into a condition which makes any exchange between two different languages possible in the first place. The linguistic transfer (moving from the Bengali to the English) occurs because Sinha can create the text in contemporary English. And he can create (and not merely transfer from Bengali to English) because he encounters Mukhopadhyay’s Pishima, Somlata or Boshon first in Bengali and then in English. In a free-flowing global-English, the reader can meet these women because of this immersive translational experience. Sinha, thus, need not speak in a non-transparent English to give the feel of Bengali-ness. He can insure the easy readability of a fluent translation and re-tell a story with a lyrical beauty that makes one think she is reading an ‘original’ and not a translated text. In this way, Sinha becomes what Lawrence Venuti calls an ‘invisible’ translator, one who does not call attention to himself (The Translator’s Invisibility, 2008).

It is important to pause and note Sinha’s role as a translator because of the remarkable ease with which the text reads. Sinha’s prose is clear and lucid, so transparent that one forgets that it first appeared in Bengali. If Mukhopadhyay’s novel is ‘translated’ (in every sense of the word)—whose novel does the reader meet—Mukhopadhyay’s or Sinha’s? The Aunt Who Wouldn’t Die is a book that pleases the senses and prods the mind, and is as much Mukhopadhyay’s novel as Sinha’s.