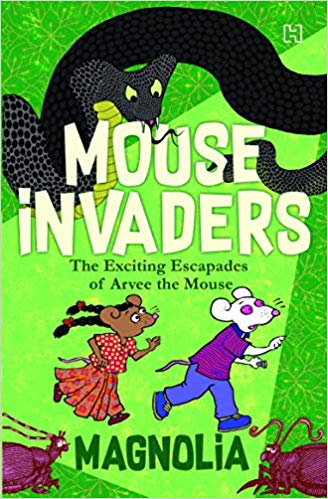 MOUSE INVADERS: THE EXCITING ESCAPADES OF ARVEE THE MOUSE 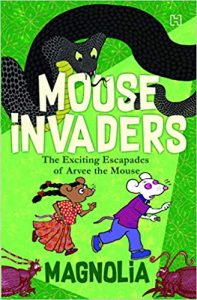 Uff! There’s a mouse in the house. I can see it scampering on my kitchen platform, behind the gas stove, then jump down lightly and scurry under the door, under the wooden crockery shelf-almirah, under the wooden stool on which my mother prefers the fridge is kept so she doesn’t have to bend down too much. It then darts across the passageway to quickly reach the cover of the telephone table and is safely transported to the bedroom—which has my mother’s and my daughter’s clothes hanging around all over! Hah! It has been evading the Pest Control India glue-pad that I’ve been placing along its everyday path for the last 3 days. Drat! How do I catch a mouse without killing it?

And now this book called Mouse Invaders has been sitting on my table waiting to be reviewed! I read it last week. I first read the first one, Mouse Attack, and was introduced to all the characters and their characteristics. Strangely, while reading Mouse Attack, for some initial parts I was reminded of HG Wells’s The Country of the Blind, and the subtle ways in which the process of otherization takes place in society. It does take place every day, all around us, only waiting to be noticed. And yet, in Mouse Attack, it slowly and softly leads to acceptance, to building of a camaraderie faced by a stiff life-threatening situation, where the ‘difference’ becomes a tool to fight the oppressor, the Ratlord called Pasha.

Mouse Invaders is chronologically situated a year later. The lab-returned and now house-mouse Dr. Arvee is back from a world trip with the human family that has taken it as a pet for the little girl (Mo) in the house. The book starts on a positive note—the white-fur mouse is back from a long trip and yearning to meet his brown-fur friends with whom he was able to fight the subjugation and tyranny of Pasha last year. On returning, he gets to understand that one of the young female mice who he is keenly fond of has self-taught herself to ‘rite’!

But the bright side of the story is soon overshadowed by the dangers of a black cobra looming large (which is given away by the book cover too) on the mice colony. And the ridiculously oppressive rules and regulations enforced by a band of shrews on the mice on the pretext of keeping them safe from the snake.

The two strongest points I marvelled at all along while reading the book were, firstly the minute details of the body movements, the calls, the habits and mannerisms of the animals. Magnolia manages to transport us into the world of mice. You can feel, almost experience the cramped spaces, the darkness and dampness of the garden living spaces, the beautifully imaginative tree house of the rebel gang, the pensive fear in the air. Secondly, characterization of all the involved mice—young and old, the snake, the shrews, the rat-lord, the few humans, the ants, the roaches, the flying mantises—all are amazingly crafted. If only the proofing was done better, the reading experience would have been so much more smooth. One doesn’t expect such small glitches in a book priced prohibitively on the higher side.

At times, cruising along the depths of mice world, I was reminded of Watership Down, but then not quite. The intensity of the threat looming large from outside did not match the internal strains and stress-points that are felt by all of us in life, and more so when we are in the rebellious teens. This story manages to capture the external tensions and worries quite well, but largely overlooks what would have been naturally the internal or even inner turmoil. I hope Magnolia would write more of the series, and with each book the weave of literary tropes as well as the plot thickens.

The book offers some interesting philosophical nuggets too. For example, on page 49, the author describes Arvee’s mental state thus: ‘The next couple of hours were an ordeal for Arvee. He knew that whatever was being done was supposedly for his benefit. Yet not one had bothered to find what he really wanted. There’s nothing worse, he realized, than being forced to accept an unwanted kindness. It makes an animal aware of how little he is understood by the very people who love him and whom he loves: one of the loneliest, most desolate feelings in the world.’ I am sure many a teenage reader would be able to relate with this state of mind straight away.

Then on page 159 Arvee says:‘…Freedom is a very strange thing. It’s as precious as life itself, and yet the only time we become aware of it is when we no longer have it.’ You will find many such small bits of wisdom strewn all over the book. I am sure that would make the book–more than a one-time page turner—a friend you go back to, to find more!

Tultul Biswas is a lover of books and has worked for over two decades in the field of children’s and educational publishing with Eklavya. The effort here has been to make books that portray child characters who reflect the agency and resilience that children often show in real life. Currently she is engaged with Eklavya’s Teacher Education, Outreach and Advocacy work area, engaged in designing and implementing learning opportunities, workshops, short courses and field interventions for teachers and grass-root level education activists. She lives with one foot in Bhopal and the other in various places in MP.