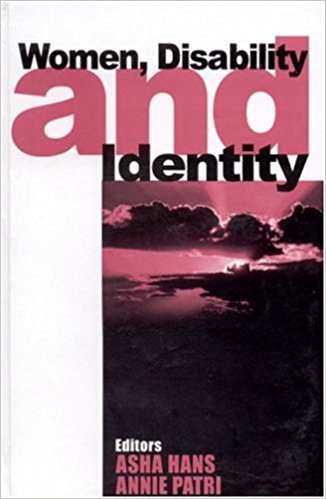 The issue of disability as a field of academic study as well as a ground for activism is gaining prominence not only the world over but in India too. The recognition of disability as a rights issue in India emerged as significant when the Persons With Disabilities Act was passed in 1995. Another instance was when the disabled demanded that they be included in the Census 2001. These two events required tremendous pressure and vociferous lobbying by the disabled themselves, parents of the disabled and some rehabilitation professionals, to assert the fact that the disabled are people and have rights too.

The trajectory of how the disabled people are viewed the world over has been similar. It is when the state, considered the guardian of rights and the provider of services, fails its responsibility, that civil society and individuals at their level take up various issues and form movements. However, often movements are not able to satisfy or include the subsections within the movement, leading to further divisions in the movement.

One such group is that of disabled women. It is within this wider context that the book under review is located. The collection of articles in the book have emerged from a conference on gender disparity and disability, organized by the Shanta Memorial Rehabilitation Centre, Bhubaneshwar in 1999. The collection includes 13 writings by women—both disability activists and scholars.

The book has been divided into 4 sections. The first section deals with Images and Values associated with the disabled. This is a very interesting and powerful section, which brings across succinctly the fact that disability is not just about health and pathology but is socially constructed. The article by Michelle La Fontaine is about the ideology of ‘perfection’ legitimized by the social inclination to connect perfection with normality and in particular with beauty in the case of women. The article comprehensively traces how medical science had constructed mathematical methods to quantify human variance. In a political economy context the study of genetics has created the notion that perfection is indeed possible using logical positivist methods as in the Human Genome Project. Medical science has, in the garb of betterment of human kind, in fact reinforced the paradigm that extreme forms of human diversity are undesirable by offering the global space an opportunity to rid itself of ‘anarchic bodies’.

The next two articles are interesting and deal with the powerful role of the media especially the portrayal of the disabled in mainstream films, both Hollywood and Bollywood. What emerges from a close look at a number of films is that the portrayal of the disabled tends to elicit pity, fear, humour or awe from the audience. In the case of women on the whole the abilities of disabled women are rarely projected. The article by Sandhya Limaye deals with yet another important aspect contributing to the images and values about disability that is sexuality. One of the most prevalent misperceptions about disabled women is that they are sexless or asexual beings not only socially but also biologically and psychologically. In addition to this perception, parental anxiety and overprotection add to the lack of social experiences leading to difficulty in achieving emotional and financial independence.

The fourth and last section of the book is titled Facilitating Strategies and Entitlements. This section deals with cases about young women with disabilities from different countries such as Mexico, India, Trinidad and Tobago, experimenting with alternatives to living and working independently from their families to gain confidence and be less sheltered.

The issues raised in the book from all over the world point to the fact that in most countries the condition of the disabled has been similar. What is striking is that nowhere, not even in one of the most developed countries i.e. the US did the disabled people get benefits without struggle. The underlying issue raised in all of the articles is that while as women they face similar problems, as disabled women they experience problems different from the non-disabled. Therefore, their problems need to be addressed by both the feminist and disability movements. Ann Darnbrough rightly points out in this book that when disabled people are oblivious of gender issues or when women do not concern themselves with disability issues, they are failing to make the links between gender and disability as two aspects of social identity. From this standpoint an important aspect, strongly related with the disabled that is missing in the book is the role of caregivers, who in most cases are women. The common view is that it is located in women’s special relationship to the function of caring, their capacities for self-sacrifice and sense of altruism. Both men and women hold this view. But because there is consensus at the level of public discourse (both official and lay) that community care is the best policy, both on ethical and pragmatic grounds, feminists run the risk of being severely criticized as self-interested and uncaring if they do not automatically slide into their roles as caregivers. According to Gillian Dalley it is important that they contest these judgments: to fight for women’s rights is to fight for justice just as it is to fight for the rights of any disenfranchised, subordinated or devalued group; to question the nature of community care is to seek solutions which are equitable, comfortable and acceptable for chronically dependent people as well as for women as (potential) carers.1

With women being prepared to remain or return to the home to care, society is provided with a readymade ‘reserve army’ of nurses—an army which does not need hospitals to be built for it to work in and does not need wages to be paid, because, it is assumed, its members are already provided for by being dependent on and supported by, wage-earning men. According to Dalley it is this ‘reserve army’ which is increasingly being activated to provide the community care that policies and politicians have been calling for over recent years—a form of care that is largely uncosted and unmeasured, which can be invoked by planners and politicians without its costs being borne by official resources. Women are offered little option as to whether they participate as carers or not. Indeed choice is not available to those in need of care.2

In sum, what seems to be missing in this book is a much stronger analysis of the feminist movement through examples of issues where the feminist movement failed the disabled women in different countries and failed also to raise crucial gender issues in the way both state and society have responded to the disabled. This brings one to the next question: have there been strong women’s movements as well as disabled persons’ movements in all the countries?

Upali Chakravarti is a PhD student at the School of Community and Social Medicine, Jawaharlal Nehru University, New Delhi.