University And Its Discontent 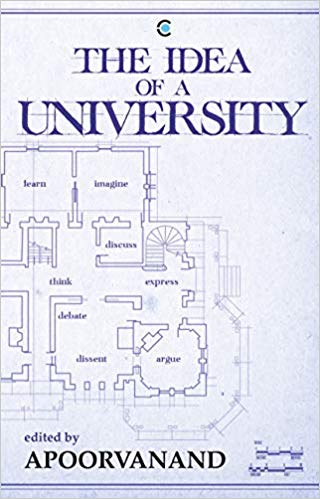 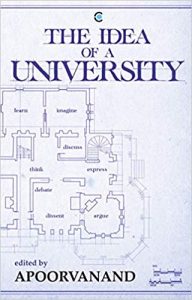 The Idea of a University, edited by Apoorvanand, is a spirited defence of ‘cosmopolitan’, liberal university education and reassertion of the meaning and relevance of academic freedom in today’s troubling times. Notably, this book draws on the same title as John Henry Newman’s 1852 volume, which was a collection of his lectures on the idea of an ideal university, (that was published in the backdrop of the first Irish Catholic University, the University of Dublin, being set up). The editor does not acknowledge this apparent connection in the Introduction. However, it is evident from the collection of essays that by tracing a detailed story of Indian universities the current volume seeks to assert, as did Newman, that a university is a space of free discussion, debate and learning for the youth.

The Introduction highlights the multiple freedoms and avenues of social mobility that a public university has come to provide, and how this very character of the university in India is under attack as the current dispensation is forcing universities to ‘redefine their role, prove their utility, shed their elitism and account for the money being spent on them…[and] prove their nationalist credentials…’ (pp. 4-11). Identifying the recent onslaught on Jawaharlal Nehru University and Hyderabad Central University as a reaction to the egalitarian culture and social mobility offered by such public universities, the editor also pinpoints the larger attack on university education in the form of ‘desertification of Indian colleges and universities’ i.e., fund cuts, faculty positions being kept vacant, etc. (p.7). Nevertheless, these assertions aside, the Introduction for the large part reads more like musings rather than a cogent engagement with the eighteen essays.

There appears no particular logic to the ordering of the essays. The collection begins with an essay by Alok Rai, who asserts that the existential crisis faced by Indian universities today goes well beyond the problem of ‘malign neglect’ confronting universities in the West (p.13). Rai highlights the policy attack on universities in terms of ‘over-enrolment’, ‘under-funding’ and overt emphasis on so-called skilling (pp. 16-17). These subvert the university system and reduce the Indian university to an ‘educational wasteland’ (p.16). In this context, the handful of institutions that have managed to exist as ‘enclaves of excellence’ (p.18) are steadily falling prey to the onslaught by belligerent ‘nationalists’, whose jumlabaazi stems from the growing failure to fulfill promises of inclusive growth and development (p.19).The next essay by Shobhit Mahajan is a worried account of the growing presence of non-scientific epistemology and redirecting of funds for propagandist ‘non-conventional’ science—both, he claims, spell doom for genuine democracy. The third essay by Debaditya Bhattacharya is an insightful examination of recent policy shifts towards graded autonomy, NAAC ratings, NIRF rankings, and the push towards the constitution of a Higher Education Commission of India in place of the University Grants Commission. A noteworthy discussion follows on the authoritarian functioning of provincial central universities like Central University of South Bihar, and the bureaucratic surveillance on State universities that State governments have unleashed. Given the illiberal pulls engrained within the university system, Bhattacharya problematizes the tendency of equating autonomy with ‘academic freedom’, and argues that what we require is the freedom to constitute the university as a ‘space of parrhesia or intense truth-telling’(p.51).

Shiv Visvanathan’s essay identifies the tension between knowledge and society as the creative tension of the university, and goes on to argue that a university is essentially a ‘commons’ which is ‘always a tentative, experimental and hybrid structure’ (p. 57). As a commons, the university espouses academic freedom in the form of plurality, autonomy, creativity and interrogation that can resist the ‘corporatization of knowledge’ (p. 66). Niraja Gopal Jayal’s essay provides an interesting survey of how academic freedom has been defined on a global scale, and then proceeds to highlight the politico-ideological and politico-administrative challenges to academic freedom in India. The next essay by Ram Ramaswamy offers further elaboration of the administrative structure and policy framework that directly or indirectly have an effect on academic freedom. Mary E John’s essay is a rich account of the historical underpinnings of the modern university. There is a particularly important section on the historical trajectory of higher education in India. Her discussion of the condition of university education in the neo-liberal era and in the context of the new regime at the Centre since 2014 does not simply highlight trends like the supposed augmentation of student-access to higher education, but also indicates the elusive nature of the so-called gains in the growth of higher educational institutions. In her words, we are increasingly confronted by ‘an extraordinarily dense and opaque political economy of higher education’ (p.112).

Payel Chattopadhyay Mukherjee’s essay draws on the visions of Newman, Humboldt, Tagore, Derrida and many others on liberal education so as to reassert the ‘distinctive’ nature of the university as a ‘space in society where free thinking and questioning is invigorated and continued despite the various attempts to homogenize the distinctiveness according to the state and society’ (p.125). Interestingly, Mukherjee questions the top-down educational hierarchy and pushes for greater inclusion of marginal voices and ‘dialogic communication between teachers and students’ in the struggle to sustain the university’s independent identity (p.125). As an administrator, Pankaj Chandra’s essay can be seen as an ‘insider’s’ reaffirmation of the threats posed by a far too centralized management of universities. Saumen Chattopadhyay’s essay delineates the neoliberal logic that universities have come to embody, which is making the upholding of academic freedom increasingly difficult.

Mohammad Sajjad’s essay is a critical introspection of the limited role, to say the least, which university campuses and academicians have played in addressing their immediate surroundings. He highlights the skewed development of higher educational institutions in places like Bihar, the predominance of upper-caste and middle-class control on academics, as well as decades of ‘woefully inadequate’ knowledge-production and dissemination (p.156). In the process, Sajjad rightly attributes the success with which regressive and reactionary political forces are attacking universities to the disjunction and anger that the broader society has come to harbour against the ‘ivory towers of academics’ (p.160). J Devika’s essay makes an interesting distinction between academic freedoms bestowed from above––which are consequently less likely to last––and academic freedoms wrested from below in the process of involvement in movements and activism. The latter is what she identifies as the silver lining in these difficult times when universities like JNU are coming under attack from the Hindutva Right Wing. Kalpana Kannabiran’s contribution argues that universities have come to occupy the center stage due to ‘cascading resistance within campuses’ against caste-based discrimination, the death penalty, militarization of Kashmir, etc. (p.175). These have ultimately ‘rocked the foundations of the dominant, authoritarian, majoritarian community that is in control of the governance of the university, the state outside, and the streets’ (p.175).

Nandini Sundar’s essay poses some valuable questions about the meaning of institutional autonomy and academic freedom in the backdrop of the evolving discourse of education commissions like the S Radhakrishnan Commission (1948-49), the Kothari Education Commission (1964-66) and the Yashpal Committee (2009). Sundar argues that in contrast to the projections of the education commissions, university education in India is less and less an engagement between the university and wider society, and has become ‘progressively more closed in its orientation’ (p.189). The subsequent part of her essay elaborates the recent ways in which academic freedom has come to be subverted with the growth of private colleges, and the curbs on research, teaching, taking political positions outside the classroom, regular employment, syllabi making, organizing events in the university, etc.

Francesca Orsini and Quentin Thompson’s essays are a welcome injection of international perspectives on the challenges faced by universities. Orsini provides an unnerving account of academic unfreedom in Nazi Germany and Fascist Italy. Thompson seeks to unpack what an ideal model of autonomy and accountability ought to be for universities that seek to respond to the demands of the twenty-first century. The essay by Irfanullah Farooqi seeks to explain the weakening of the fundamental academic ethos of universities and the resulting dilution of the resistance to outside attacks on freedom and autonomy of universities. He does so in terms of the cooption of the academia into the ‘output-driven understanding of production and performance, incentivized obedience…and intellectual dishonesty’ (p. 256). The last essay by Vinay K Kantha appears as a sum and summary of several observations and concerns delineated by other contributors. He urges the Indian intelligentsia to acknowledge this as a do-or-die moment and to take charge of socio-political responsibilities.

The diverse inputs offered in this volume are compelling, yet overlook the essential question––namely, the materiality on which the very edifice of university education rests. In the eloquent defence of the university, what are barely acknowledged are the segmented nature of the educational structure and the resulting reproduction of the segmented job market. Contrary then to the contributors’ liberal assumption that the university is about training students into becoming broad-minded, tolerant and self-reliant citizens, for the majority higher education remains the swiftest elevator to the pinnacles of power and opportunity. As observed by the Yashpal Committee: ‘as more youngsters from different segments of society enter the universities, they look at higher education as a means to transcend the class barriers. Consequently, university education is no longer viewed as a good in itself, but also as the stepping stone into a higher orbit of the job market, where the student expects a concrete monetary return’ (p.10).

What successive governments’ education policies have facilitated post-Independence, and which is merely being upholstered by the recent slew of ‘reforms’ is: (i) strengthening the hold of the privileged classes on elite (central government-funded) metropolitan universities; (ii) relegating the lower middle class to second grade regional universities and small private institutes; and (iii) keeping the working class out of the university system altogether and pushing them instead into vocational education whereby they are rarely able to cross over to full-time academic or university education. Indeed, four-fifths of India’s youth in the age bracket of 18 to 23 years do not enter the ambit of university education. The few who knock on the doors of university education are relegated to the margins under the run-down distance-learning mode. Preposterously, this so-called inclusion is projected as enhanced gross enrolment in higher education! The university democrats, meanwhile, cringe at the thought of over-enrolment, and busy themselves with shallow, isolated, parochial ‘save university’ struggles!

Of course, there is the tendency to point towards reservations, particularly in the post-Mandal context, as indices of social inclusion within Indian universities. However, it is hard to brush aside the chequered history of reservation’s implementation, and more importantly, the fact that reservations are proportionate in nature and thus prone to facilitate upward mobility of only upper-class sections and not the working-class component within scheduled tribes, scheduled castes and other backward classes.

From a collection like this one expected more incisive critiques and introspection of the educational inequality that the university system as a whole has been party to. More than the mere reification of the university as a harbinger of democratization, and the consequent idolization of enclaves of excellence that have (so easily) come under bureaucratic surveillance and virulent attack from the Right Wing, one would strive to inject a greater measure of class dynamics and materiality into the idea of a university. A truly inclusive and radical envisioning of the university would naturally mean forging a more organic link with the educational needs and aspirations of those millions of working-class youth standing on the margins, if not outside the very high walls of existing universities.