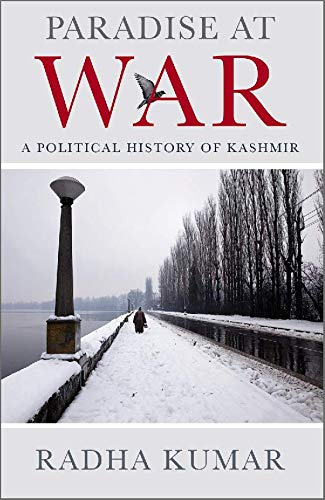 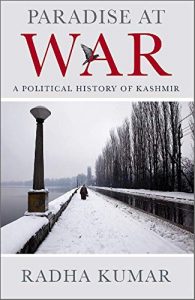 Radha Kumar’s Paradise At War is yet another addition to the large corpus of scholarship on politics As is par for the course with much of this literature, starting from a discussion on Kashmiri self-understanding of being unique and exceptional, stemming out of the region’s geographical peripherality and its relatively unbroken tradition, history, and mythology, the book moves to the post-1947 events that led to the rise of  insurgency in Kashmir in the late 1980s. The speed at which pre-insurgency political history is traced is rather breakneck, yet it manages to encapsulate quite a lot: pre-Partition politics of the State of Jammu and Kashmir (J&K), the circumstances around the controversial accession to India by Maharaja Hari Singh, the Indo-Pak conflict over J&K, the influence of Cold War politics and the role of the big powers like the US, UK, Russia and China, the inter-regional politics of the State, and the politics of the region administered by Pakistan. Indeed, Kumar is one the very few Indian scholars to engage non-polemically with the last—the politics of Gilgit-Baltistan and region that constitutes what Pakistan calls Azad Kashmir. Untangling the various threads that have created and fostered the conflict in Kashmir is a challenge. Kumar has commendably been able to throw light on many of them.

Expectedly so, however, the most informative and interesting part of the book is where Kumar uses her own experience as a policy-wonk and practitioner to focus attention on the contemporary history of the State starting from  2001. Her initial engagement with Kashmir was with the Indian policy circles working on Kashmir-related peace processes underway since 2002. Over time, it led to a deeper involvement resulting in her eventual appointment to the Government of India’s Group of Interlocutors for Jammu and Kashmir following the resurgence of insurgency in Kashmir Valley in 2010. The inexperience and incompetence of the State Government had led to mishandling of the situation resulting in nearly 117 deaths within a span of three months in street level protests. As a response, GOI felt the need to set up this three-member group.

In the interest of full disclosure, I have known Kumar for nearly two decades now, having worked with her on a project on peace processes, and interacted extensively with all the members of the group of interlocutors—Dileep Padgaonkar, MM Ansari and Kumar—in their various visits to the State. What also needs to be said is that people working on Kashmir in various capacities—as scholars, as policy-makers, and peace practitioners—make for a very incestuous circle, who despite their differences and place in diverse spaces have over a period of time learnt to listen to each other and attempted to further the cause of peace in the State, if not a solution to its political problem.

This becomes visible when Kumar delineates the manner in which she, along with her fellow interlocutors, managed to interact and engage with a wide range of stakeholders across the State and outside. The networks built during their earlier work on the Kashmir-related matters with the policy-makers and civil society facilitated their interactions and resulted in the report that they wrote up, somewhat hurriedly, in 2011. The interlocutors’ report argued for keeping Article 370 as a guarantee to maintain the State’s autonomy within the Indian Union and to provide for regional autonomy to assuage the fears of the non-Kashmiri regions of Valley dominance; they suggested that Article 370 be made permanent rather than ‘temporary’ as it is presently called in the Indian Constitution; recommended stronger cross-border CBMs; asked for a relook at the application of AFSPA and its reform; and argued for a three-tiered system of devolution of powers from the Union to the State to its provinces to districts to address the developmental imbalances in the State. It was evident that the group drew from work that already had been done by a number of people, including previous interlocutors who had come before them, their own previous scholarship, and from the numerous interactions with different stakeholders that they had over a span of a year.

The report was not put up for discussion. In fact, what followed were a series of events that resulted in extreme disenchantment of the Kashmiri population with the Indian political process, revival of street-level protests in the Valley, and a new cycle of violence, ending which at present looks impossible. The hopes that had been raised during the peace process starting in 2002 dissipated when the generation of conflict came of age and the government could not respond imaginatively to its demand for political space. Resorting to old techniques of counter-insurgency instead of curbing the consequent protests lead to consequences that are visible till date, especially in South Kashmir, in the form of daily reports of encounters between the security forces and militants. This upsurge in violence, and rise in anti-India sentiments has in the recent past also been fanned by the militant majoritarianism that has defined Indian mainland politics over the last five years. The Indian government’s extreme militaristic response best exemplified by the incident in which an Army Major tied a Kashmiri civilian to a jeep and paraded him around, ostensibly to escape from stone-pelters, has exacerbated the situation. Pakistan, of course, sensing opportunity has stepped up its efforts to further fuel the conflict on the ground.

Kumar’s conclusion in the face of these ever- and fast- changing circumstances is four-fold: one, that the Indian Government has never let go of an opportunity to ‘snatch defeat from jaws of victory’—whether it was Nehru approaching the United Nations after the tribal invasion in 1947 or his arresting Sheikh Abdullah in 1953, GOI dismissing and replacing elected State governments at will, Manmohan Singh shying away from undertaking steps for a political resolution of the problem or Modi’s extreme militarism. Two, that narratives, symbolism and compassion matter more in conflict situations. Vajpayee is still remembered fondly in the Valley for his famous invocation of insaniyat, jamhooriyat, and Kashmiriyat. Three, the learning curve when it comes to Kashmir is individual rather than institutional (both in India and Pakistan), as is evident in how interlocutors after interlocutors have been appointed by the GOI to reach similar conclusions, with no follow-up action. And four, of the different options that have been proposed over the last seventy years to resolve the J&K quagmire, the best so far has been the framework that resulted out of the India-Pakistan backchannel discussions between the Indian representative, SK Lambah and his Pakistani counterpart, Tariq Aziz which informed the Musharaff four-point formula asking for demilitarization, no change of borders, free movement of people of the State across the LoC, self-governance for all parts of the State, and joint supervision mechanism involving India, Pakistan and J&K. The exact contours of this framework are still not known, yet the fact that it was the closest that the two countries came to a settlement on Kashmir taking on board both the Indian and Pakistani decision-makers and dissident and mainstream Kashmiri leadership, makes it a template that any revival of peace process will have to consult.

Most non-polemical writing by both the policy makers and peace practitioners has reached similar conclusions. However, if any situation has ever exemplified Murphy’s Law, it is the conflict in and of J&K. Whatever has to go wrong has gone wrong here. Every new opportunity of a breakthrough has inevitably been followed by unthinking response by leadership (at all levels), which lacks imagination and ability to take risks. The result has been this never-ending spiral of violence that the State and the two countries are stuck in.

Till such circumstances appear and the political leadership rises up to the occasion, this book can serve as a good handbook (albeit from a decidedly Indian-policy maker’s perspective) to understand the political history of Kashmir, the reasons for its being ‘at war’ and possible resolutions. The book is not too academic even though rich in detail and hence accessible to a lay reader. Indeed, at times, Kumar indulges in some quirks too, for example, in her insistence on using Yusuf Shah while talking of Syed Salahuddin, the head of the Hizbul Mujahiddeen. Just a word of caution, given the broad sweep that it deals with, there are a few minor errors—like the Regional Autonomy Committee being called the State Autonomy Committee on page 216 or Sheikh Mustafa Kamal as the Sheikh’s younger brother instead of his son on page 285. However, they do not take away from the worth of the book.

Ellora Puri teaches Political Science in the University of Jammu.