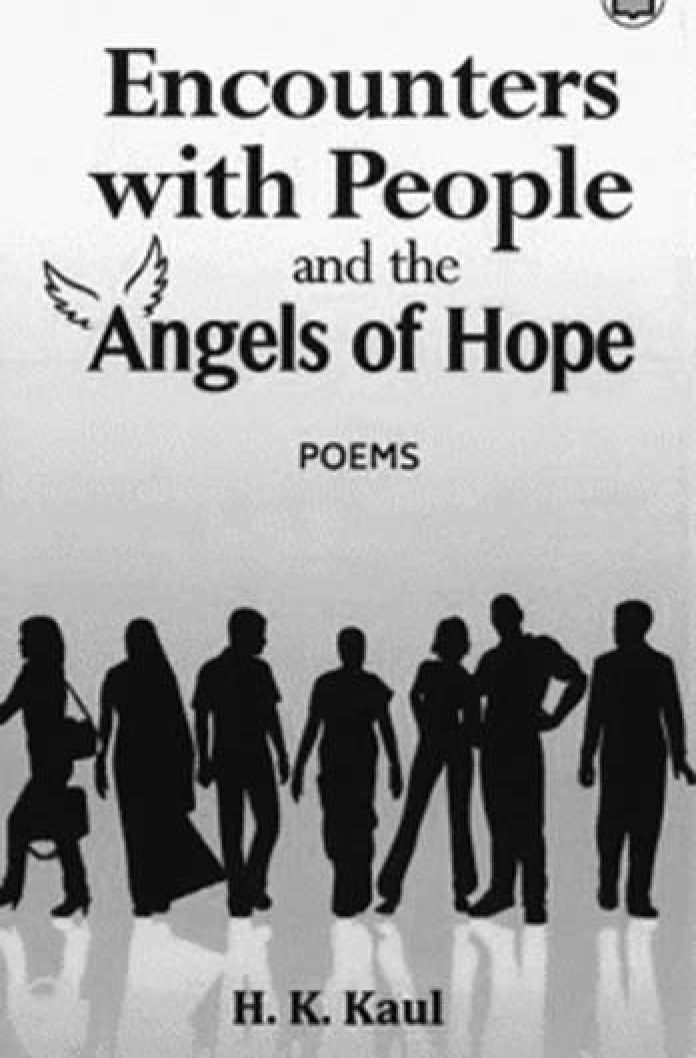 Not quite belonging to the domain of international English poetry, nor integrated with the literary traditions of other Indian languages, Indian poetry in English has often been projected as a homeless genre. The poetry of H.K. Kaul demonstrates, to the contrary, that Indian English poetry possesses the power to express a sense of cultural rootedness in a language that connects it with the rest of the world.

As editor of the Journal of the Poetry Society of India (English) and President of the Poetry Society of India, Kaul has been a
major player in the promotion and publication of Indian English poetry. He is also a prolific writer, with sixty books to his
credit, including fifteen volumes of poetry, such as On the Waves, In Deep Seas, Firdaus in Flames, Poetry of the Raj, Poetry India,
Poetry of the Young and In the Islands of
Grace.
Encounters with People and the Angels of Hope is a collection of 138 poems written during last decade, arranged in sections according to a few broad themes: Society and Culture, Struggles for Survival, Kashmiri Pandits, Crime and Violence, Religion and Spirituality, Environment, Professionals and Craftsmen, and Decaying and Death.
People are at the centre of this book. The ‘encounters’ narrated here are drawn from Kaul’s wide personal experience. Some of the poems are dedicated to people he describes as ‘angels of hope’, because of their inspirational role in human society. Others, especially in the section on ‘Professionals and Craftsmen’, focus on the artisans and workers whose invisible labour rarely finds a place in mainstream verse. ‘The Stone Carver’ for instance presents the artist bringing his raw material to life:
Free hand carving, watching the melting stone
Steady hands brought in the soul, stroke by stroke.
The stone began to speak to the carver.

‘Boatmen of Kashmir’ presents the violence of contemporary history in a timeless landscape, focusing on the experience of the men who ply these vessels:
They hold their flowing destinies in hands
Oaring through weeds, swamps and serene
lakes …

Timeless winds from mountain slopes touch them
Seal their hot visions of fire from across
Crouch them in nooks and corners of shadows
Within the battered boats or on broken banks.

Caught in the meshes of a power-driven society, those at the margins still retain their spirit:
Out of the abyss, a dark horse emerged
And crossed the finishing line.

Kaul’s poems focus on the dark and disturbing side of human nature, as well as the presence of redemptive potential in the forces of nature and an ethics of care. In surreal terms, ‘Blood Stains’ tells us
Of the blood-soaked myths, of
The extraterrestrials who vanished midair
Without removing blood stains from their shadows.
In contrast to this bleak despair, ‘Not Enough, Mother’ evokes a vision of a world transformed by women’s capacity for a love that recognizes no boundaries:
Mop in her hand, mopping the globe, she moves
To clean, care and cook she crosses borders
Lives in, lives out, commuting back and forth
Transforming this transnational motherhood.

On a more philosophical note, sections on ‘Religion and Spirituality’ and ‘Decaying and Death’ take the reader to a reflective plane. The poems in the section titled ‘Kashmiri Pandits’ evoke the poet’s nostalgia for a vanished past. They remind us of Kaul’s earlier volume, Firdaus in Flames, his epic take on the violence in Kashmir.
The poems on environment bring out the human/nature interface with delicate verbal poise. ‘Butterfly Wings’ achieves this through a dynamic vision of the self-regenerating power of the natural world:
Wings that flutter
Make things happen.
Build bridges in these
Disparate fields
Chart new roads
Over broken passages.

A cosmic vision sometimes offsets the sharp materiality of the here and now. The language revels in paradox and the play of contraries.
Vivid local words jostle for space in the English poems on Kashmir, asserting the persistence of places in the uprooted imagination. ‘This Naav’ for instance draws on the vocabulary of the boatman to conjure up a nostalgic vision of a lost idyll:
No Dal for the naav to float on
No Jhelum to float down its stream smoothly
Or manage itself up its familiar flow.

No oar to let it move from here
No naav-i-vole to take it back
With flowers, scattered far and wide— …

Kaul’s use of bilingualism draws attention to the ambivalent position of the displaced Indian English poet, moving across languages as he negotiates the gulf between a dystopian present and a romanticized past. Writing in English, the Indian poet must address multiple readerships at home and abroad. In Kaul’s finer poems, this challenge is transformed into a ground for possibility, the openness of his verse inviting new forms of readerly intervention.

Radha Chakravarty, a writer, critic and translator, is Professor of Comparative Literature and Translation Studies at Ambedkar University, Delhi.