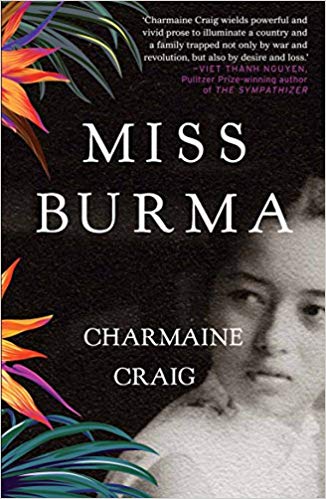 The Miss Burma in the title is Louisa Bension, the daughter of Benny, a Jew, and Khin, belonging to the Karen minority. And, she is also the mother of Charmaine Craig, the author of the book.

Charmaine Craig writes about the Burma she has heard about from her mother, starting with the life of her grandparents Benny and Khin and ending soon after Benny’s emigration to America with two of his daughters. Not a very long stretch in the record of a nation, but a most tumultuous one in Burmese history. The Second World War was raging; British colonial rule was practically on its last legs, and it had scant resources to guard India, the ‘Jewel in its Crown’ from the marauding Japanese army that was advancing through Burma; Aung San, considered the father of modern Burma, and his army were aiding the Japanese, ostensibly to free Burma from colonial rule, while the Karens and other ethnic minority groups were sturdily behind the British in the hope of future rewards with a British win. Complicated and tragic as the situation was, it was further compounded by the treachery and double dealing of Burmese leaders who took over the government at independence.

Benny’s and Khin’s early life together passed peacefully till the birth of Louisa. Then Benny, the ‘white Indian’ belonging to no identifiable group was arrested by the Japanese army, and Khin was left to fend for herself and her baby. From then on, their life followed a roller-coaster existence—extreme wealth, (at one time Saw Bension was considered the wealthiest man in the country), further arrest, this time by the Burmese rulers, more torture, release and a final uneasy, uncomfortable life with his wife and brood of children, before emigration to the USA courtesy of the CIA.

Khin, for her part, had to undergo many trials and tribulations. Left with no viable means of support, no one to turn to, very few people to succour her, she managed to survive, even though it entailed fierce sacrifices like abandoning her children for long periods of time to do what she could to support them, in absentia. When she was reunited with Benny, the tragedies of their lives had taken their toll and the comfortable life she had hoped for proved a pipe dream. It was at this period of uneasy truce that Benny sarcastically suggested entering Louisa for the first Miss Burma beauty pageant which Khin accepted in a fit of pique. No bed of roses for Louisa after winning the title. Old enough to see the deterioration of her family’s life she bolted with the first man who proposed to her. Metamorphosing as a terrorist after reigning as a beauty queen she carried on her life, till her husband was killed by his rival in the Karen freedom struggle.

This was the life of her grandparents as the author understood from her mother’s accounts in America. But, Miss Burma is more than a family tale. The politics and the machinations of the powers concerned read like a treatise on treachery and manipulation. First come the British—the ruling colonial power. The minorities in Burmese society—the Karens, the Chins, Rohingyas and so on, sided with the British who promised them separate states in a federal country after they won the war. Khin was a Karen and Benny became one by association and choice. So, they became a marked couple. Aung San and the army made up of Burmans, the major ethnic group, fought with the Japanese against the British. After the war, in a dramatic volte face, the British took up with Aung San and his army and offered them help to liquidate the very minorities who helped them in the war! The Japanese embodied cruelty and the Burmese inheritors proved no less inhuman. Internecine war and treachery marked the beginnings of independent Burma with everybody caught in the quagmire of deceit and falsehood.

Then there were the Americans, the new inheritors of the world, terrified of Communism and trying to sow dissension and trouble wherever and whenever possible. Craig portrays this hopeless situation deftly with reference to her family and the vicissitudes of their life.

The  main characters Benny and Khin, Saw Lay, the idealistic Karen freedom fighter; Louisa the beauty queen foisted with the care of her siblings at too early an age, Lynton, the happy-go-lucky Karen General, once Khin’s lover and later Louisa’s husband are all well drawn, and true to life, though, at times the author seems to labour the point by going too deeply and too repetitiously  into situations and emotions.

Meera Rajagopalan has a PhD in English Literature from the University of Bombay. She is a freelance editor and translator.