Forward Without Fear: Towards Humanity’s…

No One Knows Exactly What’s Coming—yet we can spot in advance a lot of the directions we are headed. And we can also see why those directions are potentially hugely positive for humanity—to be welcomed, rather than feared.  It is important, therefore, to address the rising fear from many adults that our technology-filled future will somehow be bad—or worse than today or the past. That is a perspective with which I strongly disagree.

Certainly, today, there is much writing and movie-making about dystopian futures. As one of those creators puts it, ‘That’s what makes for adventure plots.’ And there are some things—both short-term and long term—that actually are, and will be, bad for us.  We can’t know all of them in in advance, but like tobacco, we will eventually find them and fix them—and we are getting better at doing this faster. I believe even planetary degradation or destruction will eventually be addressed as the situation becomes dire enough for those with the means to do it actually to begin to care.

We hear the words ‘human’ and ‘people’ a lot in this discourse, usually in contrast to ‘machines’. We hear about ‘human intelligence vs. ‘artificial’ intelligence, ‘human skills vs. machine skills’, ‘human judgment vs. machine judgment’, ‘a “people-centered” economy vs. a “technology-centered” economy’, and ‘The [Human] Race Against the Machine’.  Most of this is really, I believe, just a negative reaction to change. And while the fears are understandable, I think they are not only unwarranted, but actually harmful to us and to our future generations.

Change is something that humans typically resist and find hard to deal with. This resistance to change is one of humans’ least positive characteristics, although, to our credit, we almost always eventually do find a way. We might call ourselves a ‘painfully adaptive’ species.

Today we are witnessing a similar reaction to that which occurred after every big change in human history—the grasping at the past by those who were privileged in the previous times. While some today couch their anti-technology opinions in the language of ‘preserving our humanity’ or ‘freedom’, it mostly comes down to the age-old fight between the haves and the have nots—because ‘helping humanity’ argues only in technology’s favour. Who can bemoan ‘less disease’, ‘universal free power’, ‘good shelter and food for all,’ ‘universal connectedness’, or even space travel? All that—and more—is what technology is bringing us.

Some might ask ‘At what cost?’ but the unstoppable reality is that we are all becoming ‘Symbiotic Human-Machine Hybrids’—to almost everyone’s benefit.  Some Silicon Valley executives are sending their own kids to non-technology ‘Steiner’ schools—as widely reported—because they believe, I think, that this will enable their already hyper-technology-infused kids to be better hybrids.  Most kids, however, know that to become successful hybrids in their future world they will need a lot more of the new technology than the old skills—although some of those ‘old skills’ are certainly part of the new hybrid mix. 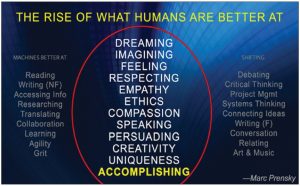 Humans have been evolving and changing forever, and the memories we pass down of previous times are all heavily edited, redacted and interpreted—typically way over—positively. In the short time we each individually get to live, each of us sees, at best, only the forward tip of human evolution—which may lead some to the conclusion that the best of all times is the best for all times.  Yet we are all better off welcoming, rather than fearing, more evolution, and investing deeply in the new Symbiotic Human-Machine Hybrid that is coming—even if getting there may at times be painful or difficult.

Humans are only a speck on a speck in the vastness of the universe we are even aware of. Anything we can do to affect nature is far less than nature’s power to affect us. Yet one way humans are special is that we do have a great deal more power than other creatures to affect things on our planet. Humans have reached many ‘peaks’ of progress (to use the term of historian Will Durant), including speech, taming of fire, conquest of animals, agriculture, social organization, morality, tools, science, education and writing and print. For the totality of humans on this earth, life has steadily improved over time. But it is important to remember that our current developmental stage is only that—a stage—and that our current evolution is only better for some.

All of these previous ‘peaks of progress’ caused massive upheavals and redefinitions of our humanity. And now we are entering a new era, based on computing power. Our machines have already become so powerful—and will become so much more powerful even in our children’s lives—that another big upheaval, and re-definition of humanity is already in progress.  We are already seeing massive ‘generational attitude change not only toward technology, but toward privacy, property, personal relationships, security, sexuality, power, kids, violence, god, justice, money, love, government, and even time and space.

Already, machines are better at a great many things formerly considered only the province of humans. These include reading, accessing information, researching, translating, much non-fiction writing, collaborating, learning, agility and grit.

In other spheres we are already in transition towards machines being better than people. These include many kinds of critical thinking, systems thinking, project management, connecting ideas, and some forms of relating, fiction writing, art and music—and even formal debating. (For an eye-opener, see IBM’s Project Debater at https://www.youtube.com/watch?v=3_yy0dnIc58.) Although there is still human creation and genius, much of the music we hear today as background loops is already written by machines.

So what will our ‘humanity’ become? I believe we will see the rise in importance of the traits that machines are least good at—at least currently. These include dreaming, imagining, feeling, respecting, empathy, ethics, compassion, speaking, persuading, creativity, uniqueness, and particularly accomplishing. These are skills our youth should be working hard at developing. The kids are already hard at work at technology integration—bonding with their devices, embedding chips into their bodies, and testing technologies that monitor and share their thoughts. While this may be discomfiting to some, I believe there is no cause for general alarm. It is, potentially, a ‘new renaissance’—a flourishing of formerly under-appreciated, but essentially human traits in all of us.

Education professor Yong Zhao titled one of his books Never Send a Human to Do a Machine’s Job. If all we want is more of what we have, we can get it by building machines. If we want things to be better than before, we should work on creating great Symbiotic Human-Machine Hybrids. There is no reason to fear this—it’s precisely what’s needed to make progress. 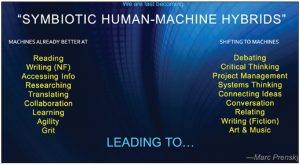 Marc Prensky is an award-winning, internationally-acclaimed speaker in over forty countries and author of seven books in the field of education. Coiner of the term ‘Digital Native’, he has taught at all levels, from elementary to college. Marc is the founder of The Global Future Education Foundation and ARISE-NET.WORLD, the Accomplishment-based Real-World-Impact Student Empowerment network, devoted to developing and spreading young people’s empowerment to better their world, and uniting all those who are working to help.

The Direction of Digital Equality
December 9, 2019