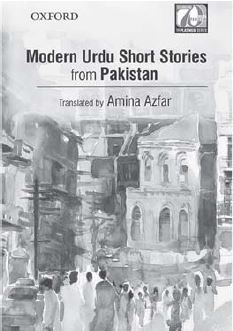 It is not easy to put together an anthology. One could finalize a theme with relative ease but inclusion and exclusion of texts around the decided theme can be an unusually challenging task. At a time when literary and academic circles, for the most part, swear by theoretical propositions that deny individual choice its due, the compiler must gear up for answering a series of questions on why some pieces were included and others were not.

Translated and compiled by Amina Azfar, Modern Urdu Short Stories from Pakistan is an anthology that does not leave much scope for questioning its contents. A collection of twenty-six short stories by writers who were/are Pakistani citizens, it is insightfully diverse and, to an extent, representative. The collection’s promise lies in bringing together stories that inform the reader of the many shades of the tradition of the Urdu short story, something beautifully phrased in the foreword as ‘the medley of tradition in the Urdu afsana’ (p. xi).

As someone who has had a long relationship with the Urdu language and literature, Azfar has not included stories that are famous (barring Muhammad Hasan Askari’s ‘Bastard’). Instead, she undertook a painstaking research to find not-so-famous works of writers such as Ghulam Abbas, Manto, Ahmad Nadeem Qasmi, and Intizar Husain. In doing so she has turned the collection into a noteworthy contribution.

Starting with pioneers, Ghulam Abbas’s 1967 short story ‘Dhanak’ translated as ‘What the Moon Saw’, outlines the deep pathos of a society that gets its spaceship land on the moon but is run by the mullahs who call it a sacrilegious act. As the anti-spaceship agitation acquires a certain momentum, it turns into a full-fledged movement that leads to change of government followed by complete normlessness. As a story that spells out the deep issues with islamization of a society, it now reads like more of a prophecy. It urges us to re-engage with the texture of a society prone to religious orthodoxy and the taken for granted-ness associated with the oft-used ‘enemy’. Manto’s ‘A Fake Story’, though a not-so-famous piece, carries his distinct literary imagination. The story presents the unique case of goons and rogues coming together to form a union and making a claim for their rights. The story’s description of the corrupt and dishonest claims for their rights tellingly introduces us to the shallow righteousness and sheer hypocrisy of holders of various public offices. Ahmad Nadeem Qasmi’s ‘Lawrence of Thalabia’ acquaints us with the tyranny that characterizes the Pakistani countryside. Known for exceptionally strong portrayal of characters, Qasmi’s story unfolds the character of senior Malik as an unapologetic tyrant actively involved in the exploitation of the tenants and the complicity of the subsequent generation represented by his son junior Malik. While the story in a way narrates the failure of education in checking ruthless and oppressive feudalism in its tracks, its end hints at the presence of a rebellious self in the exploited masses.

Intizar Husain’s ‘Monkey Tale’ is, to borrow from Marquez, an extraordinary case of how the telling itself is the tale. As is often the case with his literary creations, Husain does not head in the direction of a clear moral ending. Instead, by delving into a world of monkeys juxtaposed with the human world, he lucidly outlines the paradoxical nature of our reality; we want to be what we should not be. And in the course of this grotesque uninformed imitation, as the story suggests, our kind is destined to head to an absolutely undesirable end. Muhammad Hasan Askari’s ‘Bastard’, an exception in this anthology for it is the most famous story written by the author, is about a Christian midwife Emily through whose mind the reader gets acquainted with a range of events. Stationed in a village at a time when the arrival of modern ways of handling pregnancy and childbirth invites noticeable aversion, she is stuck in a present devoid of any meaning.

Other than stories by uncontested icons of Urdu prose, the anthology carries a number of excellent stories by other writers who offer distinct literary promise in their creations.  Agha Babar Ali’s ‘Bitter Vine’ tracks the insecurity of a middle class wife eventually turning into some kind of a silent realization of ‘inadequacies’ facilitated by a heated conversation with her driver’s wife. ‘One Night in Winter’ by Mirza Adeeb Ali is an extraordinary account of the deep intricacies of human relationships, of how wronged relationships do not necessarily go outside the ambit of understanding and forgiveness, and how moments of absolute vulnerability take us beyond everyday binaries. Shaukat Siddiqui’s ‘Bhagwan Das Durkhan’, a remarkable tale of war, revenge, sacrifice, justice and reconciliation, requires specific mention because it offers the reader a glimpse into Baluchi society. Syed Manzar Hasan’s ‘Yaseen’s Child’ is another gem of a story about a boy Ramzan suffering from paralysed legs and the unending struggles of his parents Yaseen and Afsariya. As per the prescription of a well-travelled Maulvi Sahab, Ramzan’s paralysis could be cured by eagle’s legs. Desperate to get his son back on his legs, Yaseen sets out to find the eagle and, towards the end of the story, finds an eagle with a chick. Despite being in absolute control Yaseen is not able to kill the eagle and from that unique disability experienced by him at a moment of extreme need arises an altogether different sensibility. While we start the story with Ramzan as Yaseen’s child towards the end we really do not know if the title suggests the same.

Being representative, the anthology carries as many as six wonderful stories by women Pakistani writers that equally deserve our attention. ‘A Public Flogging’ by Hajra Masroor, a story of a person publicly flogged for running away with his love-interest Chanan (already married to someone) informs us of the multiple layers that characterize a public. It specifically highlights that on such occasions, while the men show up to celebrate patriarchy’s victory over human agency, the women are there to witness none but the celebration of their own bondage. Jamila Hashmi’s ‘My Homeland, My Idol’ is a touching account of a wounded soldier’s deep association with his homeland that repeatedly gets expressed through the register of a husband’s love for his wife. It also informs us how this magical love for the homeland remains deeply personal so much so that for others it is silly. Nikhat Hasan’s ‘Footfall of a Thief’ captures the story of a newly-wed bride Azra who is grappling with understanding the physicality of marital relations. In the end, as Azra finally gathers all her courage and decides to go ahead with the consummation of her marriage, she finds her husband’s bed empty. The ending of the story endows its title with multiple meanings. Khalida Hussain’s ‘Washing Machine’ uses the everyday usage of the appliance rather brilliantly in pitching the uneasy relationship that a few strands of the past have with both memory and forgetfulness. As the washing machine remains on throughout the story, two of the characters remain intensely involved in thinking about their shared past. With a washing machine in the background of a past invoked only to be forgotten in a short while, words such as rinse, stains, spinning, drying, rattling, etc., acquire uniquely unsettling meanings. Fahmida Riaz’s ‘Akhit Jadoo’ is another excellent exploration of feminine subjectivity as more of a riddle that has been doing the rounds of our world for a long time. Dwelling on a legend found in early Sassanid stories, Riaz tellingly draws a parallel between the legend wherein the woman named Akhit Jadoo could not return to her children, and thousands of women who travel from villages of South Asia to the Middle East never to return to their homes.

There are several other stories that are equally deserving of at least a passing critique. Together these stories provide us with an incredibly rich experience of diverse realities, multiple subjectivities and a significant range of literary imaginations. While the diversity bit has been appreciated right in the beginning, the representative character of the anthology is something that can be marginally improved. It would have been even more exciting had the anthology also incorporated more experiences from the fringes. If there had been more stories emerging out of regional landscapes of NWFP, Baluchistan, and Sindh, perhaps it would have added more to our understanding of the Pakistani literary imagination and social reality. Similarly, a few pieces that dwell on the experience of a marginalized identity, be it of an Ahmadi or a Communist or a homosexual would have added immensely to this anthology.

Overall, it is a wonderful compilation that has taken this shape after years of rigorous intellectual and creative labour. It creates our interest in writers we do not know and urges us to re-engage with writers we are already familiar with. Amina Azfar’s translation is excellent, to say the least. It gives the impression of entirety and inculcates in the reader a degree of faith rarely felt while going through works of translation. This is an absolute delight for lovers of Urdu literature and scholars engaged in understanding culture and literature in South Asia.