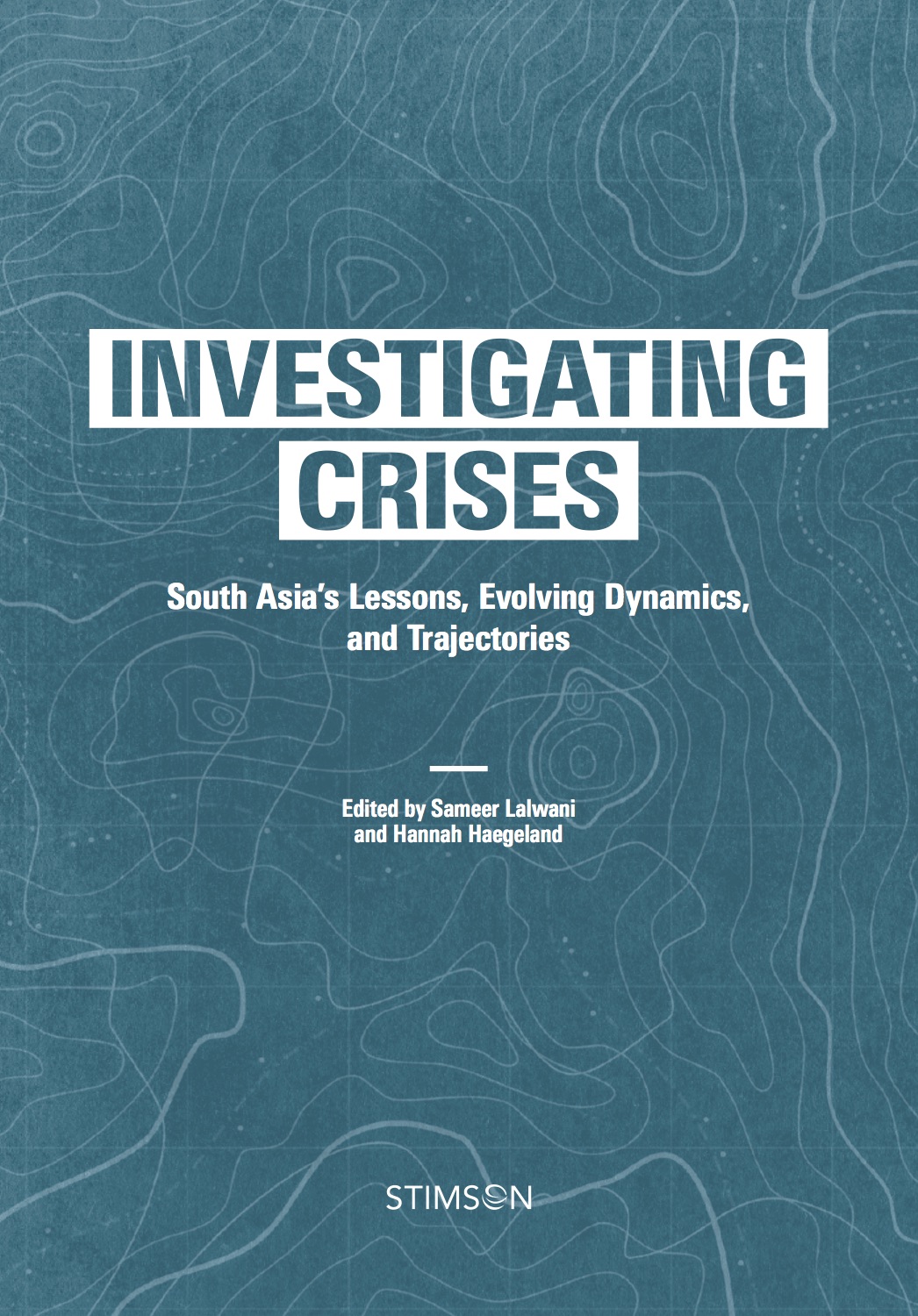 Two decades after India and Pakistan went nuclear, there is continuing fear that the unending troubles between the two countries will lead to another crisis, which could potentially escalate to the nuclear level. As Sameer Lalwani notes in his introduction to this edited volume, current trends in the relations between the two countries ‘suggest a need for more concern than at any time since the 2008 Mumbai attack about renewed crisis onset, escalation, and instability between India and Pakistan.’ But as he also notes, Indian and Pakistani leaders ‘genuinely do not want war’ and this volume is designed to bring together the lessons of the past crises to help them avoid such an outcome. Considering the enormous quantity of work already on this subject, yet another book might appear unnecessary, but the editors have managed to bring together a set of contributions that in many cases present interesting findings and arguments that is well worth contemplating.

One of the most interesting is the chapter by the editors themselves on why some terrorist attacks lead to crises but others do not. For example, the 1993 Mumbai commuter train terror attacks did not lead to a crisis, despite the large casualty count, while the 2008 Mumbai attacks did. Similarly, the Red Fort attack in 2000 did not lead to a major crisis but the attack on the Indian parliament a year later led to the so-called ‘twin-peaks crisis’. Coding the data from 51 ‘provocations’ (terrorist incidents), the authors conduct a preliminary Pearson chi-squared test to examine some of the most commonly attributed reasons for this variation in the onset of crisis. They find that most of the normally assumed reasons—the lethality of the attack or the importance of the target—are not particularly useful in explaining the onset of crises, suggesting that political factors and decisions are probably more important. The authors are careful to emphasize how tentative their conclusions are, but even with such caveats, it is difficult not to see some problems in this analysis. Ultimately, the most difficult part of the problem is in coding these events: for example, though they appear to see the Red Fort attack and the Parliament attack as similar because they involved ‘iconic targets’, these two targets are hardly the same. The attack on the Parliament, at a time when it was in session and included almost the entire national political leadership, can hardly be compared to any other terror strikes. Similarly, the nature of the terror strikes in Mumbai in 2003 and 2008 are not really comparable because the former was carried out largely by Indian citizens, even if aided by Pakistan, while the latter was a direct assault by Pakistani terrorists. But these variations are difficult to incorporate when using quantitative methods, especially when dealing with such a limited number of cases.

Two chapters by former diplomats from both sides of the border offer somewhat different takes on crises as viewed from New Delhi and Islamabad. Shyam Saran, the former Indian Foreign Secretary, looks at the problems of crisis management in India, taking three cases: the fairly obscure case of Indian workers taken hostage in Iraq in 2004, and the better-known Mumbai and Pathankot terror attacks. His focus is almost entirely on how the Indian system worked (or did not) in different crises, arguing that the primary reason why Indian crisis management was so bad in the latter cases was because decision-makers eschewed established crisis management procedures in the hope of greater control over the situation but ended up making the situation worse. It was ‘deliberate political choices’ that weakened crisis management. But there was also no effort at learning from these mistakes because those at the top had no interest in revealing their own culpability, he argues. But the ease with which established procedures were thrown overboard does not support his contention that ‘effective drills are in place to meet different types of crisis situations.’

While Saran focuses exclusively on India’s internal procedures and its weaknesses, and is thus a useful addition to the literature, the counterpart essay by the former Pakistani Foreign Secretary Riaz Mohammad Khan unfortunately trundles down the familiar story of the various reasons for the India-Pakistan dispute and the usual Pakistani solutions, beginning with resolving Kashmir and sustaining a dialogue between the two countries. A more interesting counterpoint to Saran’s essay is the one by Saikat Datta, who argues, contra Saran, that India lacks process-driven crisis management that affects intelligence capacity, strategic assessments and communications strategy. On the other hand, the differences may be less serious if we factor Saran’s argument that existing procedures are not followed, which is not very different from not having any process-driven procedures at all. As with Saran, Datta also suggests greater effort at learning from experience and mistakes, while acknowledging the political difficulties in doing so. One quibble with Datta’s piece is his take on the role of the National Security Advisor (NSA), who is chosen for his closeness to the Prime Minister, but which also leads the NSA to become a power center. I would suggest that this is exactly as it should be: NSAs, as a coordinating office, will be unable to play any role unless they are perceived as having that proximity, though they can be an irritant to existing line departments.

Some of the contributors appear almost to take it for granted that nuclearization has reduced the threat of large-scale conventional war in the subcontinent. Others who consider this as still a possibility, see this as one step on the escalation ladder. In the former category is the chapter by Zafar Khan on crisis management in the region, while Michael Krepon and Liv Dowling represent the latter perspective. But there is the possibility of escalation to limited war that does not escalate beyond, a possibility that Krepon and Dowling—and to an extent Lalwani and Haegeland—note in their chapter. There is a greater recognition in both of these chapters that political decision-makers have somewhat greater control over crisis trajectories than the earlier editions of the debate on nuclear stability in the region acknowledged. The authors of both these chapters recognize that Indian leaders in particular—but Pakistani leaders too—made conscious decisions to limit crises or even their outbreak. New Delhi’s reticence since 1999 to escalate to war, despite harsh domestic reaction, gets some acknowledgement, as does even Rawalpindi’s apparent decision since 2008 not to engage in spectacular terror attacks that force India to react. On the latter, of course, the authors are reading backwards because we do not know if there was any such decision or whether this was the outcome of any number of complex internal bargaining between different Pakistani military agencies, but irrespective, it does suggest a greater measure of control than scholars were previously willing to grant to the leadership on either side.

One issue that had generally been ignored in such works is the role that China plays in South Asian crises, which is somewhat rectified here in a chapter by Yun Sun and Hannah Hegeland, as also in a scenario-building exercise by Iskander Rehman. Sun and Hegeland suggest that China’s role has expanded over time, given its own increasing stakes in the region, though so far it has been content to be more of a supporting actor to the US. They acknowledge that the conflict between India and China reduces the acceptance of Beijing’s in New Delhi, though they still see a larger role for China in managing Pakistan especially given Pakistan’s increasing estrangement from Washington (and India’s growing closeness). Another possibility that the authors do not consider is that neither Washington nor Beijing will be able to play a mediating role in future crises: New Delhi and Islamabad could be on their own.

The role the media plays during crises (as well as in generally influencing India-Pakistan relations) has been much discussed but rarely systematically analysed. Ruhee Neog’s analysis of the role that the media (including, lately, the social media) plays corrects this lacuna to some extent. She argues that the media is not the most dependable arbiter of information during a crisis. This is by itself not surprising, but she outlines some of the reasons for this state of affairs. On the question of the influence of the media on policy-making, she finds political leadership to be the key—leaders perceived to be strong have greater control in shaping the message. In another equally fascinating chapter, Rehman outlines two scenarios for future crises, one involving India facing a two-front war, while the other involves the quandary of India’s massive-retaliation nuclear doctrine. It is possible to nitpick about these scenarios—for example, the fact that India has a massive retaliation doctrine does not prevent India from using nuclear weapons in a much more limited fashion or obviate non-nuclear punishment such as launching a full-scale war to retake Pakistan-occupied Kashmir (PoK)—but that would be beside the point.The real value is not so much in the probability of such crises scenarios becoming realities but possible lessons that Indian decision-makers can draw regarding the assumption on which their nuclear policy is based.

This book is without question a useful addition to the literature on South Asian (nuclear) crises. It explores a few new areas, suggests some novel approaches and makes some fresh arguments, which is saying a lot in such a saturated field.

The Most Dangerous Place: A History of the United States in South Asia by Srinath Raghavan, a definitive history of US involvement in South Asia, presents a gripping account of America’s political and strategic, economic and cultural presence in the region. By illuminating the patterns of the past, this sweeping history also throws light on the challenges of the future.

* Distributed free of cost. Write for a copy to: