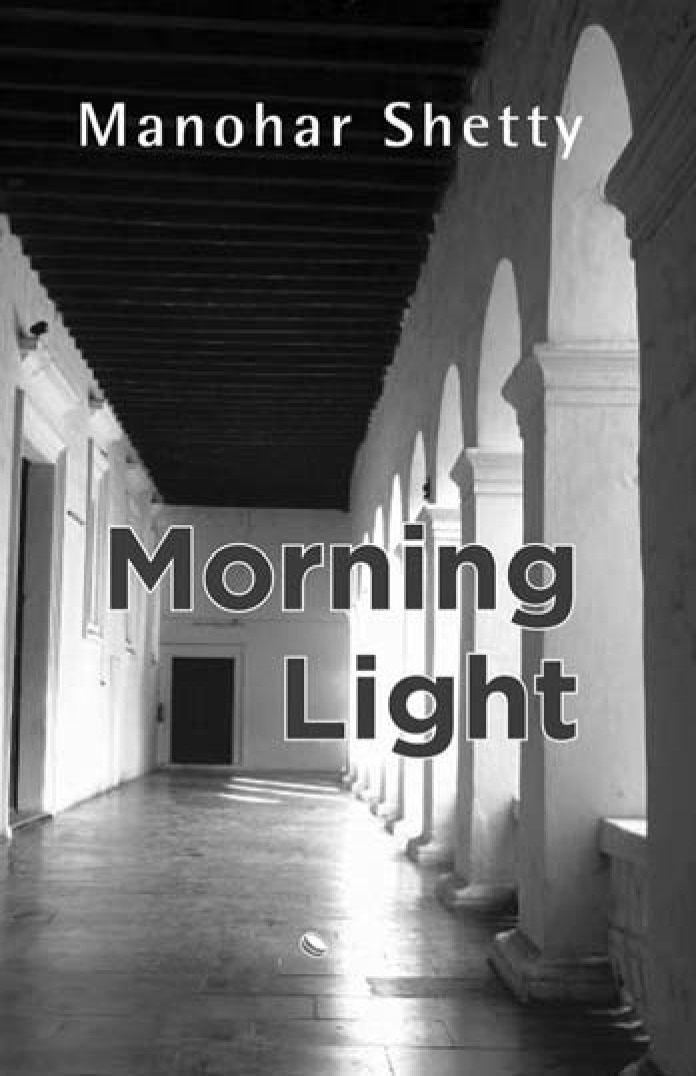 My first reaction after finishing Manohar Shetty’s Morning Light was the fear of his name being lost like a beautiful tender leaf crushed beneath a pile of dried flowers that blossom only in winters. The second was the sadness of this already happening retrospectively, and the third was of being a responsible reader.

Manohar Shetty is a poet and a journalist who lives in Dona Paula, Goa. He is a Homi Bhabha Fellow and a Sahitya Akademi Fellow who was born in Panchgani and studied at the University of Bombay. He has published seven books of poems, and his works have appeared in various journals and anthologies across the world, including The Oxford India Anthology of Twelve Modern Indian Poets edited by Arvind Krishna Mehrotra. His poems have been translated into Italian, Finnish, German, Slovenian and Marathi.
To read Manohar Shetty’s poems is to be completely mesmerized by his mature judgment in the choice of poems that make it to this collection and his authority as a poet from his sound selection of words and the economy with which he writes. Morning Light can easily be recorded as an experience where one sits for breakfast with the whispers from mortality: lives taken, lives lost, ‘lives spent fully, or ended sadly, swiftly’.
For instance, in the second poem that the book opens with, ‘Morning Light’, the pace is unrushed, the air is tense, as a death occurs in the neighbourhood and the narrator observes its consequences on him:
My body clock ticks
To a false tune

I’m up before dawn
As the crickets fall
Silent, the moon
A thumbnail sketch

In ‘Extremis’, one sees the tireless remembrance of a man by (seemingly) his wife, beneath the eulogies and his coffin carried and buried under the deafening traffic.
The mud of his grave is grit
Under her fingernails

Further, a reminder of one’s own life ending is dropped like a feather, in the ‘Last Rite’ as one performs the rituals of their father’s funeral, realizing their own ‘years like charred/ deadwood floating/ downstream into a sea/ becalmed.’
The afternoon meal is one that two poems share with each other, and we’re observers to their conversation as ‘Sleepless 1’ and ‘Sleepless 2’, a pair of poems begin contrastingly:
‘Sleepless 1’
Moonlight keeps him awake
Even after that pill washed
Down by two stiff drinks,

and ‘Sleepless 2’
I envy you your gift of sleep
Through the traffic and open
Windows, the splintering rain,
The humming mosquito.

As one lies on their back, with their heads resting on their palms, perhaps an afternoon nap, one is consumed by the silence as the poet shows us a glimpse into a dance, delicate in its beauty in ‘Dancing in Silence’, a sunlight startling one’s eyes from staying alone in ‘Encounters’, and slowly transitions into a sight of burning eyes watching ‘gloved chauffeurs’ as they drive past in ‘Limo’, the narrator trapped for a crime, dabbing the walls with stick figures of children at gunpoint and peasants on their knees in the ‘Drawings On The Walls’, or a revolutionary trapped in stone in ‘Revolutionary’.
The poems stretch their fingers to reach out to various themes, and the tea is served with biscuits and spoons for extra servings, promising a long evening. As one sits comfortably, one is exhibited with a tapestry of Shetty’s exceptional employment of his skill in the craft. Two poems, ‘Sources’ and ‘Profit and Loss’, come across as reflections of each other: the former, for most part of the poem, a list of poet’s preferences over celebratory special honours, the latter a list of non-preferences over the snow-capped mountains.
What has been a common feature of Shetty’s works is that the animals walk into his poems often commenting on human condition, like in ‘The Taxidermist and Others’, ‘Wild Dogs’ and ‘Casualties’ amongst others. However, unlike in his work Creatures Great and Small published in 2015, they are not the subjects binding all the poems. Sometimes they sit quietly and continue their daily mundane life: ‘a crow waits in the wings, a bee drinks from the mouth of a hibiscus.’
Furthermore, Shetty does not hold himself back from a critical eye and an unmistakable wit in poems like ‘Accessories’ and ‘More Accessories’ written as a series of small commentaries magnifying what augments our ordinary lives and human nature.
…She can’t
resist that paunchy
jeweller who has
designs on her bosom and wears gold
rings on all his fingers

A similar tone slips in and appears in poems like ‘Nomophobia’ and ‘Wardrobes’:
He wears a cashmere sweater
In the height of summer
And a checked golf cap
Though he’s never teed off.

as well as in ‘Selfies in Calangute’, a poem on the everyday life in Goa, where Shetty has been living since 1985. During the time when the Portuguese were in India, ‘Old Goa’, their capital was shifted after the plague in the 18th century to Panjim, and the old capital city came to be known as Old Goa. However, postcards often returned to the senders as the name ‘Old Goa’ wasn’t known at the time. In ‘Postcards from Old Goa’, Manohar Shetty writes six postcards from Old Goa, a city that reaches out to tell a tale of the ruins of St. Augustine’s, the remains of St. Francis Xavier in the church, the new settlers setting up small businesses under the banyan tree, and the lawns of the new establishments (hotels and resorts) spread out immaculately.
The dinner table is laid and some leftovers from the morning make their place onto it. The conversation is no more of youth. In ‘Standstill’ and ‘Reading’, Manohar Shetty risks speaking in whispers as he returns to the subjects of human decaying, loss of a loved one, years passing by, and time running steadily as we stand still and contemplate ‘Ways of Going’:
Not in a bed sore-ridden
Or in a cratered battlefield
Or through some heroic act
Of disembowelment
Or mangled in an expressway

As we retire for the night, Shetty, forlorn and dispirited, shares a secret through ‘Coins’, one where he has given up selling his words. There are no buyers for a poet except the ones who drop a coin as in a beggar’s plate just to hear it make a sound. Almost as an extension to ‘Coins’ is the poem, ‘Obits in a Sentence’:
Flower-framed ones and effusive
Tributes for the ruthless tycoon
And when a famous actor croaks
…
But not for us,
In the lowest rung who string
Out a few lines and stretch them
Taut to dry out battered clothes
Which droop like limp tongues.

‘Para Inverse’, the last poem is a patient observation and a transformative warning of the awareness of a fall, which creeps in without letting out a scream. As he lies down to sleep, the last poem also sleeps with him, a cushion to stop the fall as we enter into our dreams.

Nandini Varma is a spoken word poet and an educator based in India. She is the co-founder of Airplane Poetry Movement. Her works have been published in Muse India, The Caravan Magazine, The Bombay Review Anthology and The Ellipsis Magazine. In 2016, she was the co-organizer and curator of India’s first national level inter-school and inter-college slam poetry competition, National Youth Poetry Slam, India 2016.