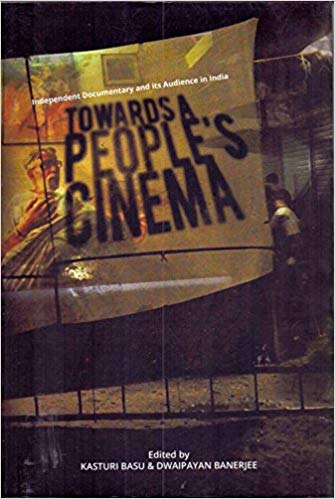 Why do we make documentaries? How do we make them? For whom do we make them? Where are our films shown and who sees them? What, if any, is the impact of our work? These are some of the compelling questions that are foregrounded and discussed in Towards A People’s Cinema edited by Kasturi Basu and Dwaipayan Banerjee. The duo takes up the crucial task of focusing our attention on the overtly political documentary*—films that do not shy away from taking sides, and that seek to bring about change in society and in the power structures therein. The editors thus articulate their understanding of the role of a filmmaker: ‘The documentary filmmaker then transcends her first role of a sensitive observer bearing witness to testimonies of injustice; she also consciously intervenes with her films, by opening up questions to the wider society and listening to questions asked of her. Thereby the filmmaker effectively joins hands in searching for alternatives for a better organization of society’ (p. 2).

This extremely well-conceived collection of essays and interviews eschews generalities, and allows the reader to dive right into the heart of the matter. Not organized as a linear historical narrative, it opens out before us like an ever-widening field, filling up with a plethora of voices, expressing dissent, questioning the state, and demanding justice. The freshness and the sincerity of the first-person narratives of filmmakers and/or film activists shines through as they look at their own journeys in a clear-headed way, unafraid of introspection and self-critique.

Cameraperson and documentary filmmaker, Ranjan Palit says, ‘I am not an activist. I had been one, a long time back… For me it is too painful. I’ve tried, but it is too overwhelming to handle. I can’t go into a situation, empathise, become an activist temporarily, and then forget about them’ (p. 153). In another instance, filmmaker Deepa Dhanraj takes us through the participative approach that she tries to follow, accepting her own position as a privileged middle class filmmaker as she and her colleagues are engaged with working class women trying to bring forth their stories and concerns. Speaking about the experience of the Yugantar collective of which she was a part in the 1980s, she says, ‘…it was a documentary practice, as much as creating a theory about the politics of representation through praxis. How do we frame women as workers? How do we bring in the minority question or the caste question?’ (p. 163).

One of the many highlights of the book is the interview with filmmaker Anand Patwardhan. It serves as a master class on the political documentary, traversing his own work, battles against censorship, and inspiration from the Latin American School of The Third Cinema. He rues that the true potential of documentaries as a means of social transformation has been grossly under-utilized because activists and political parties have failed to take these films to the people. For his part, he has spent a lifetime in literally carrying cans of film and a 16 mm projector (and in recent years, their video/digital counterparts) to organize screenings in colleges, working class colonies and in villages. ‘The films have to be used by community groups, movements, and established parties that actually believe in democracy and the politics of reason,’ he says (p. 112).

It is this lacuna that many collectives that have emerged in the last 13-14 years are trying to address. Pedestrian Pictures in Bengaluru, Jan Natya Manch/Cinema of Resistance in North India, Gorakhpur Film Society and People’s Film Collective in West Bengal are amongst the efforts that are featured in this collection. These are brave initiatives to democratize the exhibition spaces for documentaries. Offering narratives differing from those peddled by mainstream media, refusing any corporate or institutional funding, and sustaining themselves only on small individual contributions, they have tried to make inroads into multiple spaces and communities with the aim of opening up discussions and debates on issues such as land grabbing by corporate entities, rights of tribal people, people’s movements, self-determination and freedom, caste and gender.

One of the gems in the book is the story of the Ektara Collective that has dared to dream of and take a leap towards complete collectivization. They have made short fiction films and recently, a feature fiction film with a whole community as the ‘director’. Their experiments have turned on its head the idea of a film having a sole auteur. With a belief that cinema can be made in a creative and engaging way by a collective in a democratic manner, they have created strong works like Jaadui Machchi and Turup. Speaking about their philosophy, Rinchin and Maheen write, ‘The important difference of individualized work vis-à-vis collective work is of ownership among other things. In the former the final decision to keep what different people bring to the table lies with an individual, who accepts/rejects and finally owns it. On the other hand, when people feel ownership of the process, then what they bring is what enhances the vision. The process becomes one of addition and integration rather than subtraction and exclusion’ (pp. 298-9).

The only essay that seemed to be a bit of a misfit in the collection was the one on the Films Division. One can see that its purpose is to give a historical background of documentaries in India. While interesting and informative by itself, it did not quite gel with the spirit of the rest of the book as it speaks of a filmmaking body that is fully owned and funded by the state. The essays by Sanjay Kak and Tapan Bose offer enough of a historical context for us to fathom the significance of the efforts of the independent documentary filmmakers in the last 40 years.

The strength of the book is its reliance on first-person narratives; however, the flipside is that at times a collective experience may be limited in its scope by the memory and the specific experience of the individual writer. For instance, the write-up about Vikalp when documentary filmmakers from all over the country came together in 2003-4 to protest against censorship at the Mumbai International Film Festival misses some aspects like the fact that the Campaign against Censorship was initiated by filmmakers Amar Kanwar, Pankaj Butalia, Rahul Roy, Saba Dewan, Sanjay Kak, and Sameera Jain. Following the film festival Vikalp that was organized in Mumbai, there was a month-long celebration of freedom of expression in Delhi in September 2004 in which there were vibrant  seminars around censorship in media and cultural practices on the one hand, and around explorations of cinematic form on the other. In addition, there were several screenings and discussions organized in collaboration with colleges, universities and groups across the city to take the dialogue on free speech to a wider platform. In the next edition of the book, it might be a good idea to have this piece co-written by two-three people who were actively part of the campaign so as not to miss the richness and diversity of what the decentralized collective attempted.

The book, in fact, is greatly successful in bringing together narratives by established practitioners along with lesser known activists and groups giving a well-rounded and nuanced sense of a variety of initiatives and interventions. It was quite moving to read Subrat Kumar Sahu’s interview on the new documentary practice in Odisha in which he speaks about how it was not filmmakers but activists who felt the urgent need to use video as a tool of resistance.

Ending the book with Anand Patwardhan’s Master’s Thesis The Guerilla Film: Underground and in Exile was an unusual but inspired decision. It takes us deeper into the actual happenings around the turning point to which many filmmakers referred in the earlier essays: the Emergency of the mid 1970s in which civil liberties, the freedom of press and all dissent was ruthlessly crushed. In today’s socio-political climate, the resonances with that period are too many to be missed. When seen as a whole, the book comes across as much more than as sum of its parts, its greatest strength being its ability to provoke and inspire both thought and action.

Anupama Srinivasan is a documentary filmmaker based in Delhi.

It was good to find out that  Interrogating My Chandal Life by Manoranjan Byapari, published in the joint imprint with Sage as Sage-Samya, has been reviewed in the Volume XLII, Issue 8, August 2018. But we are taken aback to find that our name as joint publisher has been obliterated and it is simply being touted as a ‘Sage’ publication. So we have ceased to exist re this book. Yet the book has our name too all over: front cover, spine, copyright page and title page. It would not be a legal entity otherwise.

I thank The Book Review for its review of the book published by Sage-Samya.

I also thank the reviewer for appreciating the difficulty of translating (surely that is what she meant, and not “transcribing”) Indian idioms into English. But her appreciation of my ‘linguistic respectability’ arouses mixed emotions in me. She points to my use of the word ‘bum’ as being ‘a bit of a culture shock’ in my ‘otherwise’ respectable prose. Yet perhaps that is what the introduction of Dalit literature to mainstream readers is all about. The need to learn about the different world one is ignorant of. The ‘culture shock’ is deliberate, as is my use of words like ‘shit’ and ‘arsehole’—which the reviewer appears to have missed.

About my use of the definite ‘the’ and indefinite ‘a’, which the reviewer feels are grammatical mistakes, a list of these mistakes would be appreciated. Or perhaps, are the conclusive definitives and the inconclusive indefinitives of Manoranjan Byapari’s world very different from those of the reviewer’s? Would they not then be also used differently by this Dalit author, and hence his translator?