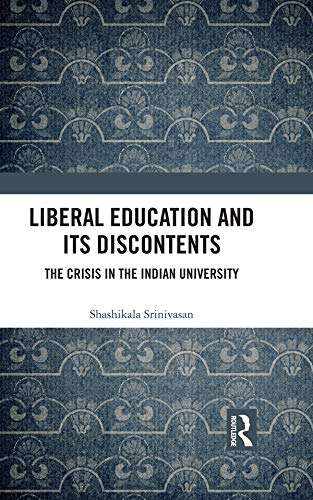 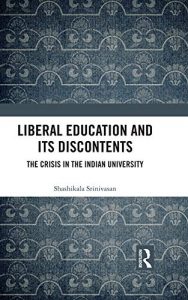 The past few years have been tumultuous for universities across the country. On the one hand, universities have seen student unrest accorded to a demand for greater freedom for speech and exchange of liberal ideas; on the other, there has been a restructuring of courses and revision of syllabus at all levels of higher education. Changes in both administrative and academic systems and processes have led to a radical change in the experience of education and the idea of a ‘university’. The increased attention enjoyed by university education in the past few years perhaps stems from the emergence of ‘knowledge economies’. Knowledge is looked at as a variable that indicates a nation’s development. It is in this context that the book by Shashikala Srinivasan proves to be critical in understanding the discourse surrounding university education in the country.

Srinivasan begins by presenting the various dimensions of concerns surrounding the crisis of university education across the world. She classifies these concerns into external and internal issues. External concerns refer to the relation of the university to the larger society; in other words, in what ways is the university able to contribute back to the society. Internal concerns refer to the generation of knowledge systems and becoming an enabling structure for learning; or are universities able to act as spaces where new knowledge(s) are developed through an exchange of ideas and thoughts. The focus on looking at knowledge as important in serving the developmental goals of the state reduces the understanding of the role of educational institutions to merely fulfilling the socio-economic goals of the nation. This in turn shifts the focus away from liberal education. Liberal education, or liberal arts education, as it is sometimes referred to, itself has been criticized for serving the interests of certain class, gender, and imperial groups. In addition, university education in India has been criticized for alienation from local contexts and attempting to meet normative goals set up by the West, besides being managerially and financially inadequate.

Srinivasan’s thesis goes beyond looking at universities in India for their infrastructure and rhetorical or instrumental interpretation of quality. Instead, she looks at university education in India through the lens of Daya Krishna’s argument that ‘intellectual traditions are a must for sustaining institutions across generations’ (p. 20). In revisiting the debate on university education, Srinivasan purports a different cultural perspective to life and education in the Indian tradition. In doing so, the author traces the history of the modern university to the Humboldtian model of the nineteenth century that demarcates universities from other institutions of learning, as spaces for higher education with the aim of pursuing ‘knowledge and truth for its own sake’ (p. 31). She argues that this conceptualization should be seen as a cultural phenomenon specific to Europe. However, history of education in India reveals that the difference in cultures has been used for bringing educational reforms in the subcontinent, in order to initiate ‘natives’ into a common European moral order. In other words, much of education in the colonial times was initiated because the British believed the people of the subcontinent to be immoral.

Srinivasan outlines the history of education in India through the writings of Raja Ram Mohan Roy and the movement towards secular education. Further understanding was developed through the thoughts of Tagore and Gandhi. Both thinkers agreed that knowledge of the external world through a study of causes and objects is not the most important form of knowledge. Instead, they emphasized on ethical knowledge and considered ‘knowledge of “how to live”’ as more important (p. 164). Tagore contemplated on the crisis in Indian education and emphasized the need to find one’s own education through experimentation, creativity, and initiative. He criticized the imposition of rote learning that came with British education. Gandhi was strongly antagonistic to modern education and proposed an alternative in the form of Nayee Talim. ‘Gandhi here is drawing from the learning traditions of India which transmitted such a practical form of knowledge, a form of reflection which could only be acquired through immersion in practice’ (p. 155).
Exploring the ideas of Tagore and Gandhi in establishing education that is of and for the nation, Srinivasan points out that educational institutions under the British did not focus on providing education for meeting the ideas of swaraj and self-exploration, which Gandhi and Tagore focussed on. British categorized practices that focussed on the self and consciousness as religious and mystical and not educational. Thus, there is an impasse in the very conceptualization of education and form of knowledge, in the writings and practices of Gandhi and Tagore, and those presented by the ideals of modern education through British institutions. Through this analysis, the author proposes that alternative models can be constructed to reflect on contemporary discourse in education.
Srinivasan’s book comes at an opportune time when universities are under question for the quality of education that they provide; the relevance of the knowledge generated to industry; and the role of universities as spaces for transmitting specific ideologies. The book leaves us with significant questions for reflecting on the state of education in the country: In a country struggling with issues of unemployment and economic inequalities, can university education be restricted to aiming for rhetorical, ideational thought alone without utilitarian aims? Where public funded institutions run parallel with privately funded institutions, can there be a singular conceptualization of university and a common set of goals of university education? Has India etched an international position for itself that is strong enough to be able to develop an alternative model of education, distinct in character from the accepted ‘western’ model? Can the ideals of Gandhi and Tagore be used to establish a culture of education that provides a strong foundation of tradition to such an alternative model?

Srinivasan’s work serves as the base for further exploration of and engagement with possibilities for furthering the discourse on university education.