The Evolving Politics Of Odissi 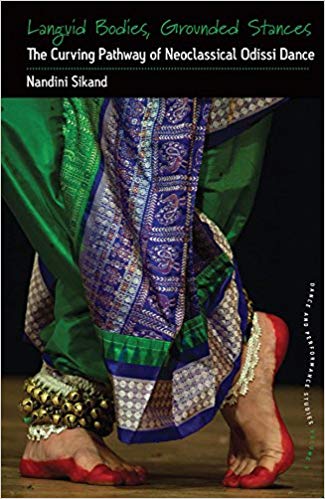 Jaydeep Sarangi has always been a prolific poet; Faithfully I Wait, is his sixth poetry collection. Sarangi lays open his soul in this collection of poems. Reading through the catalogue of his works would enlighten a reader of Sarangi’s oeuvre—a long list of collections, edited anthologies, translations and critiques. Be it poetry as an art form, translation, anthology or critique, this poet is bound to the genre of verse. The collection is sequential, with the wordplay on ‘faithful’ or ‘faithfully’ functioning as a motif, reinforcing Sarangi’s faith in poetry. There is a strong autobiographical thread and a concurrent temporality in this collection; recollections of the past, living memories, visions of the future and commitments of the present are all wrapped up faithfully in verse. The poems explore moments, revelations, premonitions, and form fragments of a holistic thought process that defines the essence of verse.

Nandini Sikand’s book, Languid Bodies, Grounded Stances: The Curving
Pathways of Neoclassical Odissi Dance, is yet another important contribution to the growing attempts at re-visiting the ‘classical’ (in this case, the author describes it, for very strong reasons, as neoclassical) dances and music of India. Bharata Natyam and Kathak and to an extent, Kathakali already have definitive accounts of their respective evolutionary histories. The book under review is one of the first scholarly accounts of Odissi. It attempts to approach Odissi not as an exotic and spiritual/mystic temple art that is unique to its place of origin, rather, it presents Odissi as a part of the larger human endeavour to engage in artistic expression.

The author, although a trained Odissi dancer and performer, does not hesitate to bring a critical lens to the dance form, and more importantly, is prepared to place the dance within a network of social, economic and political structures that are local, regional, national and international/global. In doing this, the author is able to demonstrate effectively the constructed and re-constructed nature of ‘classical arts’ such as Odissi, and move away from a ‘holy cow’ attitude that has come to characterize much of the engagement with the classical arts forms in India. The latter approach does tremendous disservice to the dance form, presenting it as ossified and rigid.

Critical investigation and understanding would demonstrate, like this book does, that Odissi (for that matter any art form) is constantly evolving and changing and is dynamic. Nandini Sikand argues that Odissi has been impacted by colonialism, the nationalist reconstruction of India’s past, the impulses of Nehruvian state building (and the marshalling of artistic and cultural resources to this end) and more recently globalization and a neoliberal paradigm characterized by a postmodernist approach to art and performance. The burden of Nandini Sikand’s arguments is—Odissi cannot remain immune to the vast array of changes and influences within which it is placed. The author examines arguments for and against change. There are dancers, critics, audience and presenters who are loath to depart from ‘tradition’ and then there are others who are keen to expand the artistic scope and imagination of Odissi.

Nandini Sikand’s book attempts to provide the reader with empirical details and examples of such creative leaps. It is a fact that art in general, and Odissi is particular, has never remained static. However, who innovates, how is the innovation mediated by the existing practice, when it is initiated, what is the location of the so called innovative practice and who approves or disapproves of it and how are the new elements propagated—these are some of key questions that determine the life and times of classical dance forms in India.

Bharata Natyam, in a certain sense, was first off the block, and the reconstruction of this dance form to suit the sensibilities and philosophy of the nationalist, upper caste, middle class groups of south India, is an account that is by now very familiar to all scholars of dance history in South Asia. Similar processes of reconfiguration and re-packaging have resulted in the now well established Carnatic music katcheri (concert), Mohini-attam, Kuchipudi and other similar dance and music practices, to name just a few.

In most of these cases, elements from the existing performance practices were selectively picked or discarded to suit the purposes of a young nation trying to claim for itself a glorious past. Soon, through patronage extended by the Indian state and its cultural institutions, the state run broadcasting corporation and television, and support from articulate sections of the newly emergent upper caste educated middles classes, the recently minted ‘classical’ traditions acquired hegemonic status and acceptance.

The content, form, language, genre of music, the kind of instruments, stage arrangement and décor, costuming and jewellery—all these were aspects that have been culled together through a deliberated process of selection. Many existing practices were quietly discarded and new practices were introduced, justified by invoking a mythical and pure past and tradition. Communities that hitherto embodied these music and dance forms were dislodged citing moral, social and aesthetic grounds. This was an inevitable ‘collateral damage’ that accompanied the re-imagination of the art, where the art had to be taken away from the traditional artist who performed it.

The new social groups that took ownership and leadership of these art forms succeeded in imprinting their vision, understanding and aesthetics in the name of authenticity and tradition. These new groups were upper caste, urban, English educated and mobile. The last aspect is of great interest in the neoliberal world within which ‘classical performing arts’ from India are trying to find a place.

Nandini Sikand’s book is very valuable because she tracks this journey of Odissi from the villages of Odissa to Bhubaneswar and then to Delhi and other metropolitan cities of India and finally overseas. Her book focuses on Odissi as is it growing and evolving in the USA. Other researchers can explore the trajectory in the UK and other countries where a substantial Indian diaspora lives and works. In every such journey, the dance form changes and acquires something new, while dropping something that existed. Nandini Sikand argues, and correctly so, that it is this process that helps keep the tradition alive.

This book urges the reader to re-examine certain binaries that keep coming up while discussing Indian classical dance—binaries that are repeated often, such as form versus content, tradition versus innovation and so on. The author suggests that the form is inseparable from content; the form itself in fact is the content. This reviewer tends to agree with the idea that each dance form—i.e., the way it uses the body to occupy space, and its relation with gravity, tells us a great deal about the nature and the philosophy of the dance form and its approach towards embodiment.

In a similar vein, the author questions the other binary between insiders versus outsiders who practice and perform Odissi dance. Is it important to belong to the soil of Odisha to be able to perform Odissi? The author draws attention to the tension between the more ‘parochial’ dancer and the global, English speaking dancers. In this context, she discusses the role of the landmark International Odissi Festivals that brought together dancers from all around the world to Bhubaneswar, thus energizing the world of Odissi dance. Should Odissi remain true to its location or should it become a world dance? In doing so, will it remain ‘authentic’?

Nandini Sikand makes effective use of the work by leading Odissi dancers and scholars such as Ananya Chatterjea, Sharmila Biswas, Ramli Ibrahim, Madhavi Mudgal, Ashwini Raghupathy, Rahul Acharya and many others. She demonstrates, through an examination of the pioneering efforts of these and many other dancers, the vibrancy and dynamism of Odissi. She establishes without adopting a querulous pitch, the close connection between the art, the artist and the location. She picks up some interesting controversies that have dogged these leading practitioners and Gurus—for instance, Madhavi Mudgal used Hindustani music and not the (usual) music of Odissi to accompany some of her dance choreographies, Ashwini Raghuphathy has attempted to deconstruct and demystify the dance by taking it into the heart of the busy city of Bengaluru, Rahul Acharya’s performances have raised questions about masculinity and gender fluidity within the Odissi vocabulary.

Ramli Ibrahim, a Muslim man from Malaysia, is an ‘outsider’ in every sense of the term, a Muslim, non-Indian man dancing and teaching Odissi in a location away from India—challenges all the elements that are required to create the authentic Odissi. Nandini Sikand recounts the unseemly controversy over the female dancers of his dance company who performed extensively in India wearing a costume that eschewed the odhni (a sash like cloth to cover the blouse). This became the basis of mounting an attack on the dancer’s understanding of the culture and authentic traditions of Odissi. While some critics and dancers condemned this attire and feared a takeover by Bollywood aesthetics and sensibility, others clearly were able to see how this issue was being using to target a dancer who did not subscribe to the conventional notion of who an Odissi dancer could be. Nandini Sikand reminds the reader that in fact, one of the pioneers of Odissi dance in the 1960s, when it was yet to gain the kind of popularity that it has acquired today, was Indrani Rahman. She was born of mixed parentage (American mother and an Indian but non-Oriya father) who popularized Odissi all over the world in a costume that did not use an odhni. The book has some beautiful black and white photographs of dancers and dance productions drawn from across the world. One of the stunning photographs is of the lovely Indrani Rahman striking a pose in an Odissi costume, minus the odhni. So much for authenticity and tradition!

Nandini Sikand draws the reader’s attention to the nature of engagement with the ‘classical’ performing arts by the Indian diaspora in the post-1991 globalized economy. India embarked upon a new economic regime characterized by an export led, outward looking and privatized market economy that came to quickly replace the state led and protectionist economy. A new middle class with increased access to global consumption patterns, it was feared, would threaten the national cultural identity.

Resurgent nationalism in India sought global powerhouse status and unmatched growth statistics, but feared the erosion of traditional hierarchies. Classical performing arts and dancers and musicians have come to be deployed as storehouse of Indian authenticity and tradition. It is thus that the author’s description of Odissi as a neoclassical dance form begins to make complete sense. Not only is it a dance form that was put together by culling together elements from existing but disreputed local dance traditions, it has today come to be seen as the symbol of an ancient past (which is no older than a couple of decades) and of authentic traditions. The question of authenticity is even more central in the globalized world that we live in; the Indian state is unabashedly chasing western style growth, but fears the social and cultural consequences that might result in the overthrow of traditional privileges and hierarchies. Hence, it becomes very important to secure these privileges and hierarchies. This is done in the name of authenticity and religious identity, classical performing arts that have been only recently reconstituted come to be deployed to secure traditions, culture and religion. In this milieu, dancers who wish to keep their art dynamic and alive would need to understand that their art is more than just a received tradition that has to be preserved, rather that it is a tradition that is constantly in the making—and that is the only way to keep the tradition alive.

Krishna Menon is Professor in the School of Human Studies, Ambedkar University, Delhi.