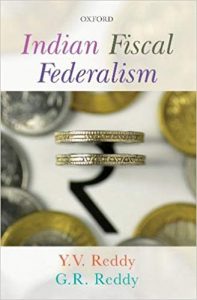 It is rare to find books which are easy to read even though they are dealing with relatively non-readable topics such as Fiscal management, Institutional development and Policy formulation. This book, while it pulls no punches on these usually convoluted issues, is both lucidly simple and yet packed with information, which is presented in a very readable manner.

The debate on Centre-State relations, as the book blurb points out, is often conditioned by a presumption about the relative efficiencies of the Centre and the States. It submits that while there is often an impression that the States are profligate relative to the Centre, the revenue and fiscal indicators do not support this view. Similarly, it brings out that the often-contended view that States do not, in comparison to the Centre, adequately emphasize social expenditure, need empirical evidence to validate presumptions regarding the relative efficiencies. The authors point out that there has actually been more competition between the Centre and the States in providing  ‘Private Goods’  or subsidized private goods than in the area of  securing provision of  Public Goods such as ‘Law and Order’, Roads etc. The book also points out that there can be varying assessments of the level and usefulness of social expenditure, converting the debate, in the words of the authors, ‘in practice, as a game in politics…..played between the union and the states’. The book has been composed to allow both practitioners and non-practitioners to understand the nuances of this game and concludes, in the last chapter, with a nuanced advisory on the terms of reference issued recently to the 15th Finance Commission.

The authors are YV Reddy, a former Governor of Reserve Bank of India and Chairman of the 14th Finance Commission, and GR Reddy, a 1971 batch Indian Economic Service officer (who has served at both the Centre and in State positions, mainly in the areas of Public Finance and Centre-State relations),  currently the Adviser (Finance) to the Government of Telangana, and had been an Adviser to the 13th Finance Commission. What is not brought out is that YV Reddy had also, amongst his other public service contributions, functioned as an adviser to the People’s Republic of China, at the behest of an UN agency, for reform of their fiscal management systems in the 1990s and in a way contributed to the Chinese miracle. It is the perception of some, who had occasion to work commercially in China, that the Governors (of provinces) and Mayors (of cities) in China (but also other countries like USA/Canada) are far more businesslike and task-focused and in a way alive to the necessity of pampering investor egos than any public figure in India. This could well be happening, not because of differences in national character or  in types of government, but because the fiscal power balance is far more centralized in India, making the line executives less aware/ troubled  about  not only of  the importance of the need, but also about what actually helps, to grow revenue.  It is therefore a pity that the authors have not added inter-country studies into their story.

However, the reader can rest assured that what has currently been provided through the book’s 16 chapters is in itself, a rich fare, meticulously cross indexed with data, to act as a thought-provoking tour guide of the origins of policies, institutions, and practices which underlie the architecture and reflexes governing Indian fiscal federalism. Critical issues such as the changing nature of public debt, changing nature of Centre-State relations and the differences in the approach of the different Finance Commissions, the various alterations in the fiscal architecture such as the promulgation of the Goods and Services Tax regime, the unorthodox origins as also the abolition of the Planning Commission and the later creation of the Niti Aayog, all find a place in the book. Some of the important issues discussed are:

–The existence of a structural vertical imbalance in Indian fiscal systems because the tax raising powers are tilted to the centre while the States have greater responsibilities, especially in economic and social services.  States incur over 60% of the combined government expenditure but their share in revenue collection is only 40%.  Then again, a similarly uneasy equation exists between the States and their local bodies probably because the Constitution provisions were initially somewhat ambiguous. While the Directive Principles (Art 40) refer to requirements for Panchayats, they are silent regarding urban local bodies. Constitutional recognition came through the 73rd (relating to Panchayats etc.) and 74th (relating to urban local bodies) Amendments in the eighties which however left it to the States to devolve taxation powers as also the powers to charge for local services.  As quite a few States feel that the amendments were an imposition, what has been witnessed in practice is that there has been an equal reluctance there to delegate powers to the 2nd/3rd Tier equation.

––The magnitude of this vertical imbalance varies across States for a variety of reasons. In other words, there also exists a horizontal imbalance.  As a consequence, any mechanism of transfer from the Union to the States has to simultaneously achieve a balance between the Union and the State Governments on one hand and amongst the State Governments on the other. The authors bring out that different Finance Commissions have, over the years, used altogether 12 criteria, albeit with shifting weights across commissions, for arriving at ‘fair’ tax devolution calculations. These criteria can be classified under 5 heads: Need (represented by Population, Area and demographic change), Equity (represented by Backwardness, per capita income distance, inverse of per capita income, poverty, revenue equalization, infrastructure difference and fiscal capacity distance), Efficiency and Performance (represented by contribution, tax effort and fiscal self reliance), Fiscal disability (represented by Forest cover) and non-Plan revenue deficits.

––There has been a phenomenal rise, over time, in the share of Cesses and Surcharges in the total revenue pool. The authors estimate that these have risen from 2.3% of the Gross Tax Revenue in 1980/81 to 14.3 % or Rs 3.24 trillion in 2018/19 BE. As these do not form a part of the divisible tax pool and are thus not shared with the States, some observers feel that this subverts the spirit of cooperative federalism.

––The implications of a post-liberalization innovation, the Services Tax. The authors point out that the Constitution had neither envisaged nor assigned Services Tax, to either the Union or the States. However, for a variety of reasons, manufacturing never took off in the country and as a result the ‘Services’ sector assumed ever increasing importance in the country’s GDP.  Services Tax was first introduced in 1994/95 initially as a levy on 3 Services (General insurance, Stock broking and Telecommunications) and was extended over time to almost all services (barring a small negative list of 17 heads) and has now gained a prominent share of the total divisible pool of revenue. Though the authors have not explicitly referred to it, readers may recall that the unions representing the staff manning the Central and State wings had both gone on a public agitation sometime back, each demanding a greater ‘work load/responsibility’ share as compared to the other.

––Despite impressions to the contrary, the impact of dismantling of the Planning Commission on the Indian fiscal architecture has never been well discussed in the policy forums. The book brings out that the origins of the Planning Commission had been somewhat controversial. Throughout its era, State Governments always raised objections regarding its functioning. Thus its successor had two specific opportunities to rectify matters: the first arose with the restructuring of the centrally sponsored schemes post implementation of the recommendations of the 14th Finance Commission. It is brought out that while the Niti Aayog was involved in the entire process, there was no qualitative change in either the design or implementation promised when the Planning Commission was wound up and instead the effort was only to shift greater financing responsibilities to the States. Then again, when the distinction between Plan and non-Plan expenditure was removed, the book points out that the occasion could have been used to undertake a comprehensive sector-wise review of capital and revenue expenditures, but it was not done.

In conclusion, given these and other aspects, the authors are critical about the recent ‘Terms of Reference’ announced for the 15th Finance Commission. These TORs require that the 15th Finance Commission take into account the impact of the Central Fiscal post 14th Finance Commission and the imperatives of the national development programme including ‘New India 2022’. The authors feel that such TORs can undermine the role of the Finance Commission as an arbiter of the competing demands of the Centre and the States assuring the predictability of transfers and by implication, weaken the federal polity. They then go back into time to bring out that this is not the first time that this has been attempted. The authors thereafter discuss the methodologies adapted by the earlier Finance Commissions to secure federal fairness despite such awkward TORs and end the book with a wish that the current Finance Commission would also similarly so ensure. The authors argue that it should be recognized that the dominant objective of Federal Transfers should be to moderate fiscal capability differential across States for providing comparable levels of Public Services at comparable levels of taxation. The book submits that the complexities involved in reducing inequalities in development actually requires  the cooperative efforts of both parties on several policy fronts and by implication not necessarily on financial transfers alone.