Bechain’s Burdens Are India’s Too 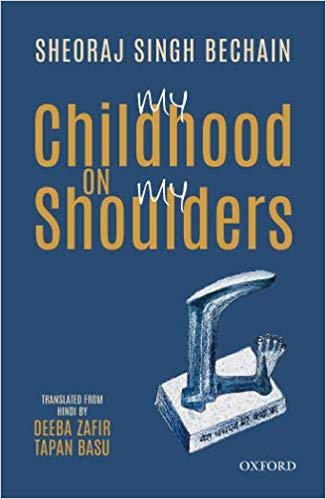 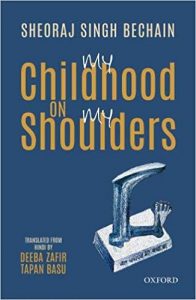 Sheoraj Singh ‘Bechain’, currently Professor in the Department of Hindi, University of Delhi, was born in a family of Chamars in Nadrauli, in the Badaun district of Uttar Pradesh. He cleared his matriculation in 1978 at the age of 18, with extraordinary resilience, courage and determination, surmounting a heart-breaking period of social isolation, family alienation, extreme physical hardship, hunger and poverty. Mera Bachpan Mere Kandhon Par, his autobiography documenting the early 10-year period of his struggle to live and educate himself (up to matriculation), was published in 2009 and has already been translated into Punjabi and Urdu. Thanks to the initiative of the Translation Editor of OUP, Mini Krishnan, who spotted a translated excerpt of Bechain’s writing in Tehelka even before the Hindi original was published, we now have the English version, although it took nearly a decade to see the light of day. The painstaking translation by Deeba Zafir and Tapan Basu appears to have overcome the challenge of rendering the curious admixture of khaddar boli (a dialect spoken in the areas surrounding Badaun) and Hindi quite successfully as the English text reads seamlessly without flagging reader interest in even a single page.

In 1979, just a year around the time after Bechain cleared matriculation, India and the world took notice of Loksen Lalvani’s famed 16-minute documentary for Films Division titled ‘They Call Me Chamar’ which narrated how Ramdayal Dixit, a Brahmin became Ramdayal Chamar after his marriage to Rajkumari, a Harijan. The location was Dhakva, 30 kms from Varanasi. We are shown vultures in the background, cattle being skinned and a naked child barely three or four years old, toying with a portion of the animal skeleton which remained after skinning. Ramdayal living with the Chamars after his ex-communication carries on unfazed. The Chamars even make him a mukhiya. Bechain’s first person account however travels far beyond: it is Orwellian in its delivery, full of the immediacy of personal experiences.

Bechain’s early life story set in Nadrauli, Pali Mukimpur, Chandausi, Chirori, Kesar Kalan, Kasra, Dibai, Baajpur, Raipur, Gunnaur and Delhi (Rajouri Garden), and originally written in 2009, nearly two decades after Lalvani’s film, drives home the point forcefully to the reader that things have probably gotten worse if not pretty much the same even after several decades of Independence and despite all the relief schemes and so called affirmative action programmes announced from time to time in the name of Dalit emancipation. What stands out in the book is also the story of a certain section of Chamars who called themselves Jatavs after giving up leatherwork and who discriminated against their own fellow caste members in the most vicious manner possible.

Bechain’s life story opens with a graphic account of his father’s murder by the village exorcists on the pretext of treatment for a bout of indigestion! He goes on to chart his life’s journey together with his sister Maya doing all manner of jobs in addition to his ancestral profession of skinning and tanning. Moving in and out of new parental homes (his mother married twice after his father’s death), he charts his own future without giving up his passion for learning despite all handicaps. Besides working as an assistant to masons at construction sites, he delivers newspapers, sells lemons and eggs, digs wells, polishes shoes and even participates in a wedding band. (He narrowly escapes being apprenticed even to a gang of robbers!). Being  a minor at that point of time, his wages were not even half of what was paid to a normal wage earner and, sometimes, he was not paid anything on the flimsiest of grounds. If he had lunch or dinner at a marriage, his wages would be deducted in proportion or he would have to put in extra hours! Regardless, he skims the miniscule amounts of his savings often to buy text-books and folk lyrics. The most significant obstacle he encounters is his own family’s (his mother included!) visceral opposition to education. His stepfather has his schoolbooks burnt merely because he was better at studies than the stepbrother. He once stole a rupee from his uncle’s pocket to buy reading material for which his mother was held guilty and mercilessly beaten up. In an agonizing dilemma, Bechain however does not confess to his crime as he does not want to jeopardize further what little chance he had to get a job, to look after his family (and hopefully education). He also confesses that years later he gave Rs 10 to a bookseller in Gunnaur to compensate for the books he had stolen! Such was his passion for the printed word.

Bechain’s penchant for poetry and folk lyrics was noticed by his teachers at school and one of them offered to pay for his education in exchange for his services as a farm hand. It was however a very tough grind, as he had to work sometimes until 2 am in the morning. His stint in Delhi was as a helper in a nickel factory. He also worked as a waiter and dishwasher. A play he wrote for his landlord’s son on the martyrdom of Shahid Bhagat Singh in a competition earned him a lot of goodwill but all assistance came with strings attached. He also came in touch with the Arya Samajists and despite being close to their fold he was not entirely convinced of their credentials as he felt they were not sufficiently or genuinely egalitarian in their outlook. He also makes the important point that although the State of U.P had a Dalit leader as CM, it made little difference to the lives of the poor. He finally clears his matriculation examination in 1978 at the age of 18.

The reader hopes for the release of the next instalment of Bechain’s autobiography dealing with his life as an adult, his family and as an academic. The writer has already hinted that ‘another rendezvous’ with his readers with a detailed account of his further life may well be written.

Bechain’s book is remarkable for its plain, unvarnished, style and is a significant work that provides an insightful account of what it means to be poor. It is essential reading for all those who are opposed to affirmative action. The mandarins at Niti Ayog, the North Block, and those devising relief programmes for the disadvantaged and wondering about the lacunae in the last mile delivery of financial and social relief would do well to pay attention to this insightful first hand account of someone who holds a clear mirror to the harsh realities of the rural poor. In that sense, Bechain’s burdens are India’s too.

Lastly, to quote Zafir and Basu, the translators, ‘Bechain’s book is part of the Dalit literary movement that has militated against the authority of the hegemonic Hindi literary world. Therefore the translation of this text involved not just a representation of an excluded segment in the traditionally insular sphere of “literature’’….. Bechain’s book is a compelling account about his hard-won right to self-articulation, and therefore, its translation not only places his struggle in a larger cultural field but also enables the furtherance of the Dalit agenda of an alternative vision of human liberation.’