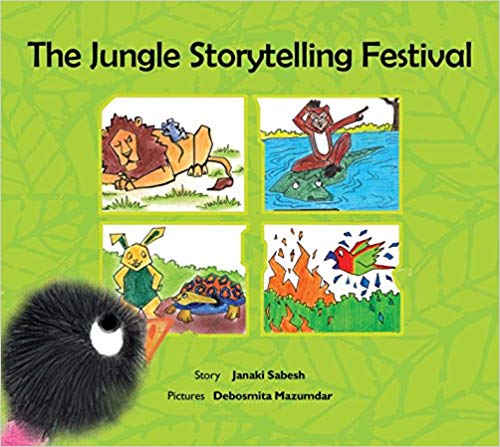 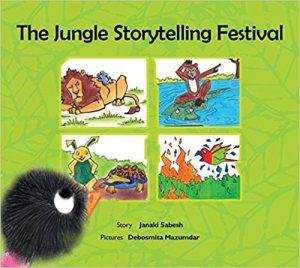 Even in the very crowded world of children’s books about talking animals, The Jungle Storytelling Festival stands out for two reasons. Ostroo the Ostrich stammers, and is derided by the other creatures when he wants to participate in the storytelling festival. Slinking away to hide his tears, he comes across Mouse mamma and her two baby mice who teach him to sing his tale. As a talented singer who has been conducting storytelling and sing-along workshops for children for years, Janaki Sabesh taps into the power of singing to overcome stammering. This enabling tale is simultaneously enriched by the very power of storytelling. My quibbles are minor. The animals could have been given more creative names—Ostroo for Ostrich and Squirry for squirrel are lazy and unimaginative. Other animals don’t have names at all. The exceptions are the definitely nice names for the baby mice, Eli and Meli. The story would have been enriched by the actual tale that Ostroo told at the festival—we learn that it was about how he got his long neck—and we want to know how! Perhaps the book could have ended with that being the tale for next time, to create a sense of anticipation. The illustrations are delightful, and do much more than complement the pictures—they tell a parallel tale, for the stories told by the monkey, the tortoise and the lion at the festival are not spelt out in words. This book will help its readers recognize the multiple languages—words and pictures—in which a tale can be told: an undeniable masterstroke!

Arun lives next to The Forbidden Forest which he is not allowed to enter. But he naturally does—what child can resist the temptation of doing the forbidden? He runs into no tigers or elephants, but sees some stray deer. So far so good. We learn next that the only sound in the silence is the chirping of birds. An observation so typically urban that most of us would not even think about it. If there is birdcall—‘hundreds of birds calling out from the trees’ as the author puts it, it is not silence. Our urban notion of peace, of relief from the industrial noises that crowd our world, might make us remark on the ‘silence’ of forests, but a forest is teeming with sounds. Wind moving through trees, branches whooshing, twigs crackling and falling off, reptiles slithering along fallen leaves, squirrels scurrying about busily and calling out to keep in touch with their companions…

If this book is meant to sensitize children to the natural world, birdcalls cannot be lumped as one undifferentiated mass. Bulbuls sing, parrots screech, owls hoot, sparrows chirrup. Well, okay, there aren’t words for the entire repertoire of birdsong, but the least one expects is some research on the variety to be easily spotted in a forest in Assam or elsewhere (I am assuming this is Assam as Arun’s father, a forest officer, is Mr Bordoloi, but it could be Eastern or Western Ghats as the sequel features robbers after sandalwood), and naming some birds that Arun sees/ hears. 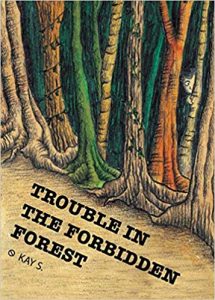 Next, this forest abounds in flowers: ‘white, red, pink, blue, orange, yellow, they hung in bunches from green bushes and trees’. Could we learn the names of some of these flowers, please? If this were simply an enchanted forest, with no relation to reality, this kind of over-the-top description might pass, but in the sequel, it will turn into a real forest under threat from loggers whom Arun will help nab. But in this, the first book, Arun, who is playing an imaginary game of cops and robbers breaks a branch, which is apparently a breach of the rules of the forest, and invites the wrath of its guardian spirit, a yaksha. Who is predictably a ‘big giant with a fierce white beard and thick white hair flowing past his shoulders down his back’. Yawn! By the way, isn’t a giant big by definition? And how exactly does a beard manage to be fierce? Never mind, it is all in the good cause of making Arun—and by extension all children—understand the importance of not harming trees. To that effect, the yaksha turns Arun into a tree so that he can know how trees feel. But Arun wants to return to his family, and softening at his sincere apology, the yaksha allows him to transform into a boy at night though in his human form he is not allowed to speak of his daytime life. Rather confusedly for a plot with magic, Arun has to be nudged in the morning by a mango tree to hurry up as it is time for him to return to being a tree. As Arun clambers out of the window and rushes to his allotted place in the garden, one wonders if the yaksha’s magic was dependent on the lad’s cooperation! Eventually, after the yaksha lets Arun return to being a full time boy, on condition of secrecy about his experiences in the forest, the tale he spins to explain his absence to his parents is as hackneyed as possible. The one genuinely creative element in the story is the relationship between the cook Lakshman and the gardener, Mungroo.

Having briefly been a tree, Arun retains the ability to converse with trees. In the sequel, Trouble in the Forbidden Forest, he is asked by the mango tree outside his window to help the forest where robbers are cutting the trees to sell the wood. And King Yaksha, whose magic transforms anyone who breaks a branch into a tree is helpless because the gang leader of the robbers is his brother taking revenge for not having been chosen king. If we intend to make young people aware of the threat to forest wealth, this is certainly not the way to go about it. Nor does this kind of story handle any issue of sibling rivalry and jealousy. Though this is not a review of Year of the Weeds (by Siddhartha Sarma),* it is worthwhile to mention that excellent novel simply to say it gets everything the two Forbidden Forests don’t, and makes none of the glaring errors that these two books are practically sunk in. Alas, these two books are neither magical nor real, nor even remotely in any realm of magic realism.