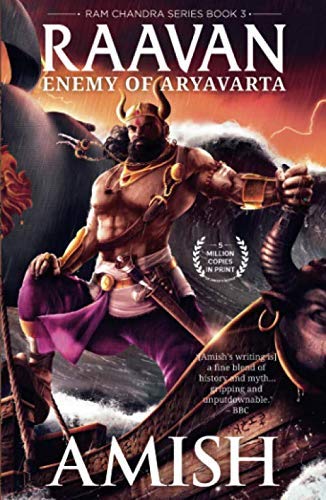 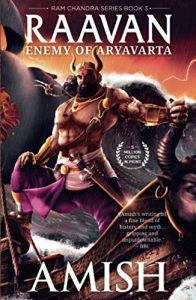 Raavan: Enemy of Aryavarta is Amish Tripathi’s third volume in the Ram Chandra series, which is his personal take on the epic Ramayana. In this series of books, Amish aims to interpret the pluralistic history of Hindu culture, which is not limited by depending solely on a narrow lens of religion. This book is a riveting tale of the life and times of Raavan, that borrows as much from mainstream mythology as it does from fiction. The deep complexities of Raavan’s character, to the author’s credit, are presented in a way that intrigues and captivates the reader.

At different intervals in the book, Amish makes an attempt to sensitize the reader to Raavan’s softer human side. To cite an example, the King of Lanka is shown in terrible pain and suffering at the loss of the woman he loves. The book also emphasizes the role of Kumbhakaran in the life of Raavan. In fact, the protagonist’s relationship with his brother has been another way of showing his human side. For as violent and powerful Raavan was for the world, for Kumbhakaran he was always a protective and caring elder brother.

The book, as all other works of Amish, delves into elaborative detailing, for instance, when it describes the beauty of Kanyakumari, the majesty of the Pushpak Viman and even the eeriness of the sporadic events of torture, leaving the readers spellbound. However, some aspects of Raavan’s life could have been pursued further, such as his rivalry with Vali.

The epic saga takes the reader through a mesmerizing journey filled with gripping twists and turns that satiates the thirst for thrill and adventure, still leaving the reader in a state of wanting more. It is no wonder then that those attached to the series eagerly await its next installation.