Desire: The Essence of Life 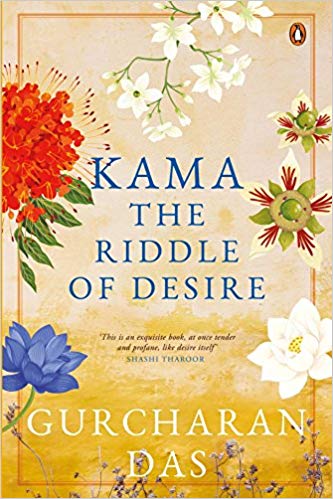 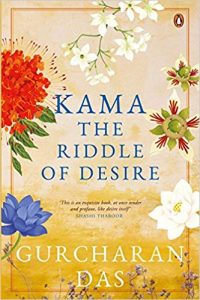 Dharma, artha, kama and moksha are the four purusharthas in Hindu philosophy. A purushartha is an object of human pursuit or a purpose of a human being. Gurcharan Das has written about artha (India Unbound) and dharma (The Difficulty of Being Good). Now, he has written about kama–perhaps the biggest challenge of his career as a writer.

Artha is fairly easy to define. It means wealth or property in Sanskrit, for an individual, for a nation or whatever. Dharma is a bit more complex. It means religious or moral duties and is very often rather subtle. In many cases there is nothing clear-cut or unambiguous about dharma and its uses. But, kama is the most difficult of the four. It means longing or desire and as such, deemed worthy in ancient times to be a purushartha. Unfortunately, down the ages, its meaning has become degraded, and now, it is popularly used to denote lust, both sexual and otherwise.

What is kama really? The Mahabharata calls it desire, the essence of life. It is the driving force of life, without which creation would not have happened. It is the delight that the five senses enjoy in the natural beauty of the world. The Rig Veda says that kama or desire was the firstborn of all things and from kama, the world was born. Desire begets intention, and intention turns into determination. From determination action is born and action is the mark of a human being. According to Hindu mythology, Brahma, the Creator, fell in love with his first creation and had children through her. Life thus came into being because of kama. It is a powerful, irresistible force, which is ‘procreative; capable of ecstatic pleasure; and wildly uncontrollable’. And, therein lies the rub. Uncontrollable, ecstatic pleasure, particularly in women, could be very harmful to an ordered society controlled by patriarchy.

So kama began to acquire a bad reputation, the world over and more particularly in India, where saints and ascetics like the Buddha, Shankaracharya and Gandhi condemned its ‘pernicious’ influence. Victorian England saw its social mores shift and become more and more orthodox. (Das laments that the exquisite last stanza of Jayadeva’s Gitagovinda, where the physical consummation of Krishna’s and Radha’s love is described, was deemed unfit for public consumption and left untranslated). This intolerance and prudery was not surprisingly exported to India, where unfortunately it still persists, even though it has disappeared in Britain.

Kama, therefore, is considered to have two opposite sides––one joyous, without guilt and the other serious and guilt ridden. Das has made a very interesting distinction between those who embrace kama and those who condemn it––the kama optimists and the kama pessimists. This division helps a reader understand kama more clearly through the actions, writings and behaviour of the optimists and the pessimists.

Gurcharan Das uses a fictional memoir to propagate his ideas. Amar, the hero of the story is also the narrator. Using his creator’s prerogative, Das describes situations that lend themselves to the elaboration of his theory of kama. The memoir is perhaps the weakest part of the book, but it is only a vehicle to carry Das’s theory of kama forward. And, as such, it is very much more effective than a mere stating of facts and figures can be. Amar comes to Delhi with his parents as a refugee. His father, a doctor in Pakistan gets a job in the Indian government and he is satisfied with it. His father becomes an example of a kama pessimist, while his mother, a kama optimist, hankers for better things. Similarly, Amar’s grandmother’s ganja-smoking pundit, who finds pleasure in a beautiful sunset is a kama optimist as opposed to the rigid black suited Irish fathers in Amar’s school who are deeply suspicious of happiness. Descriptions/elaborations like this abound everywhere and make it easier for the reader to follow the philosophical arguments that wrap up every chapter.

With 12 chapters, these arguments are too many to be enumerated, but mention must be made of the chapter titled ‘Love-Death’. A translation of the German term liebestod, it means dying for love that Isha’s tragic end exemplifies. To pad up his argument of the great impact of kama, Das cites not only Wagner’s last opera of the same name, but also the love and death of Romeo and Juliet. The achingly beautiful poetry of the young Shakespeare resonates with a sympathetic reader and suggests the power of kama more powerfully than any explanation can do. But, the main thing is Das overtly neither praises kama nor condemns it. He leaves it to the reader’s discretion; but what he definitely seems to recommend is balance: the middle way.

Some characters that the author portrays in the story need to be mentioned. Ramu Mama and Kamini Masi, Amar’s godparents in Bombay, who exemplify the positive aspect of kama; Anand, the nagarika, or the lovable rake who is the catalyst in Amar’s life, Raj Desai who introduces him to the Kamasutra, and many others. Of course, the three women in Amar’s life––Isha his first love, Avanti his wife and Amaya his mistress all of whom exemplify different aspects of kama.

The result of the author’s five years’ research is stupendous. The works that Das quotes in his book cannot be enumerated (he should have added a separate Bibliography apart from the Notes!). He has delved into Proust, Tolstoy, Chekov, the Upanishads and many, many more. It is mind boggling, both literally and figuratively!

The cover design depicts the five flowers in Kama’s armory––white lotus, Ashoka, mango flower, jasmine and blue lotus. With a bow madeout of sugarcane strung with honey bees, and these flowers as arrows, Kamadeva is surely is a powerful entity!

A powerful, meticulously researched, well written book, but definitely not an easy one!

Meera Rajagopalan has a PhD in English Literature from the University of Bombay. She is a freelance editor and translator.