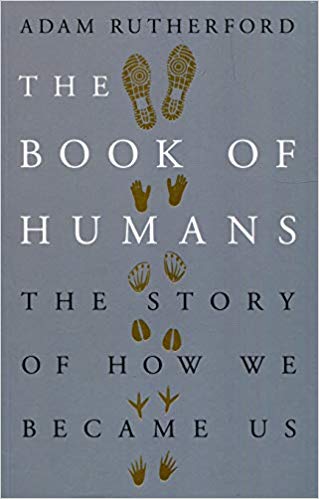 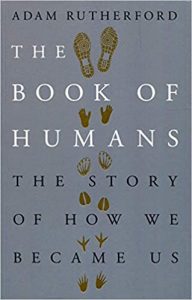 Adam Rutherford, that prolific public intellectual of the life sciences, has now put his words where his heart has quite evidently been for a long time. In this, his 2018 book, The Book of Humans: The Story of How We Became Us (and it is perhaps aptly renamed in the 2019 USA version—Humanimal:  How Homo Sapiens Became Nature’s Most Paradoxical Creature—A New Evolutionary History), Rutherford widens his remit from explaining the technical arguments and resultant ideas of evolution (Creation, 2014) and of human migration (A Brief History of Everyone Who Ever Lived, 2016) to the far more ambitious task of explaining to us that, while ‘different’ and ‘interesting’ we may well be from other animals, we are not particularly ‘special’. ‘Good luck with that’, I think, but that is the sort of cynical lethargy that Rutherford will have no truck with. And my goodness, he (almost?) persuades me out of mine.

Even in this age of easy-trivial fingertip information, Rutherford’s casual erudition is impressive, and his chatty, deprecating (both self- and nonself-) humour carries it effortlessly. In consequence, much of the book is a series of endlessly entertaining wide-eyed-oh-my-goodness-did-you-know stories. Most of these stories are about all the many instances of non-human animals doing things that we thought (some of us still think) only humans did. In the first part of the book, he talks about tools and shows us, not just that many other animals make and use tools, but the bewildering lack of any pattern in which species make tools and which don’t. He talks about how ‘we’, as in human-like animals, used a relatively unchanging set of tool technologies for hundreds of millennia and then, relatively recently, upped our game. He talks about the fact that we use an extraordinary diversity of sexual interactions for non-reproductive purposes, and rollicks his way through a gallimaufry (his word, used elsewhere) of non-human sexual antics that collectively say, somewhat tritely, one would think, that other animals in all likelihood have all kinds of sex for fun, too.

This is salutary, certainly, in taking us down a peg, and yet, it also provides a paradoxical sense of anthropomorphic amusement. Rutherford, who does his best to keep warning us not to anthropomorphize, keeps doing precisely that every once in a frequent while.

In the second part of the book, Rutherford takes on somewhat more nuanced ‘human’ capacities––speech, language, symbolism and consciousness. In fact, his idea of ‘consciousness’ just precedes his idea of ‘regret’, leaving one expecting that ‘ethics’ will arrive as the next step. It does not, though. Instead, what Rutherford is focused on is to show us how our ‘bodies’ and ‘minds’ have grown together in inextricable linkage. He describes at length how it is not simply our ‘brains’ but other body parts including throats and hands, the genes that control them, their design and functioning, that all participate in the making of our humanness, and it is no surprise that he ends this journey in the cultural space of teaching each other.

Yet, Rutherford’s book is steadily aware of the strident issues in ethics and, dare I say, politics that encompass what he is trying to write about. I am filled with respect for his inclusive, compassionate, rational politics; they come up on every page, sometimes in deeply funny asides, sometimes in passionate argument debunking a diversity of pseudo-scientific claims. It may be somewhat tangential at times to his central thesis.

Rutherford makes two interestingly distinct points about ‘us’. One is that we are not uniquely different from other animals in any one characteristic, even in those we think of as quintessentially ‘human’. The differences in any one characteristic are of degree, and even there, other animals are as different from each other as we are from some of them. His second point is that the way we are different is that we have come through a unique ‘cognitive revolution’ (although he disapproves of using ‘revolution’) or a ‘Great Leap Forward’ (which phrase people can disapprove of for other reasons). This involves an ‘intellectual sophistication’ (much though we may doubt it looking at our neighbours), but rather than in any distinct ‘biology’ per se, it seems to be rooted in our ability to learn from and teach each other, even across generations. How we acquired this apparently non-biological (‘…not in our bodies or in our physiology or even in our DNA’, says Rutherford) nature is the puzzle that permeates Rutherford’s book. He ends on a tantalizing note; it is plausible that all our ‘biology’, all our genetically selected characteristics have been simply the background that made it possible for us to respond to specific circumstances in ways that eventually created cultural societies with non-biological transmission of adaptations. Rutherford talks about evidence indicating the possibility that only when we are crowded together enough can we sustain this ‘culture’ of ours, and he does not shy away from the ethical implications that arise.

Cultural inheritance is arguably Lamarckian, and it is therefore a bit sad that Rutherford dismisses Lamarck as a great scientist who was wrong on a great idea. That is far too facile a dismissal, especially in these times of ‘epigenetic’ mechanisms that allow the environment to affect heritage. I find myself wistfully wishing for Rutherford’s insightfully quirky takes on the possibilities thrown up by epigenetic inheritance; the book would have been even better for it.

Rutherford goes back and forth between the idea that the transmission of culture is ‘biologically’ (‘genetically’?) conditioned, and that it is independent of biology. The confusion goes further sometimes in his stories. Thus, he says that it is impossible that the ‘ability to carve a hook from a snail shell was encoded in DNA.’ Yet, he has just told us that the New Caledonian crows make probing-stick tools without having been taught (since they came out of eggs hatched in the laboratory). He also points out that we have remained genetically ‘the same’ for millennia, and yet he points out the various ways in which culture affects biology, including the common story of (some of) our persistent ability to digest milk. This confusion is not entirely of Rutherford’s making; the fields he is describing are replete with it. In part, the confusion is an eliding of the distinction between large-scale differences and small-scale ones, and one wishes that Rutherford had spent more of his formidable explanatory talent in explaining the boundaries of the distinction.

While Rutherford lists all the things that we do that other animals do too, there is the occasional exception that he notes and passes on without pause, to my puzzlement. He notes, for example, that humans are the only animals to be able to strike a spark and get fire, thus making a true tool of fire. Is this combinatorial nature a clue to our ‘us’-ness? Rutherford has passed by and won’t say. Yet, the idea that many different variations in degree-but-not-in-kind may combine together in new interesting ‘in-kind’ ways is a crucial part of his riposte to the common ‘we are different in degree not in kind’ argument, which involves precisely such complex transitions as the source and basis of our ‘us’-ness.

I have quibbles, but they are quite likely the carping of an enviously inarticulate fellow-scientist. Rutherford does not acknowledge the difficulties that the ‘exceptions’ he identifies when life (or nature) did something all-in-one-leap and only-once-ever-that-we-know-of pose for his generally Darwinian thesis that complicated stuff happens slowly and messily. How does this expectation stack up against the one-time evolution of life (which he only refers to in passing)? How does it explain the one-time-ness of the formation of a complex symbiont as a ‘eukaryotic cell’? Admittedly, these are not the puzzles he is writing the book to explain. But, there are oddly interesting gaps too; although it seems churlish to castigate the poor man for failing to include yet more stuff in his capacious compendium. However, talking about ‘fashion’ as well as about all the many varieties and modes of sex, and yet not talking about the idea of ‘beauty’—well, that seems more than a bit odd. There are other, more trivial oddities: why would you want to name (in a footnote, too) the viral protein, integrase, that inserts viral nucleic acid sequences into our DNA, but not name the more peculiar viral protein that copies RNA into DNA which can then be inserted? Reverse transcriptase, it is called, underlining how odd it is, and it fetched its discoverers a Nobel Prize.

But finally, back to Rutherford’s leitmotif—‘evolution does not work like that’. He is right, of course, but it sounds more than a bit plaintive. In fact, it sounds exactly as plaintive as Darwin frequently did in trying to argue about evolution, which underlines the Sisyphean nature of the task that Rutherford set himself in this book.

Satyajit Rath is with the Indian Institute of Science Education and Research, Pune.