From Dialect To Language: A Historic Struggle 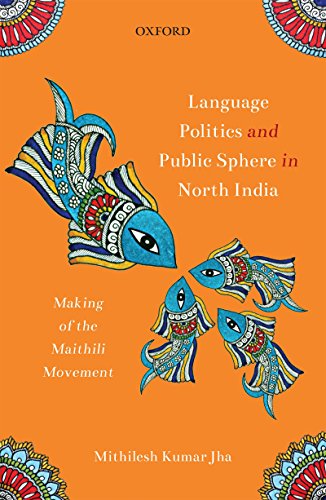 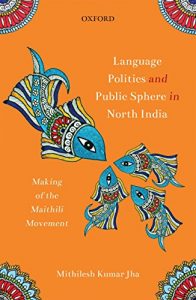 The rich literary and historical trajectory of Maithili language and its recognition as a distinct identity, both linguistic and cultural-political have been well documented and examined in Mithilesh Kumar Jha’s Language Politics and Public Sphere in North India: Making of the Maithili Movement. It is a sophisticated and well-argued work cutting across the disciplinary boundaries of History, Sociology, Political Science, Cultural Studies and Linguistics. It is a valuable addition to the existing robust set of earlier writings by Jyotirindra Dasgupta, Baldev Raj Nayyar, Paul Brass, Uday Narain Singh, Christopher King, Vasudha Dalmia, Francesca Orsini, Lisa Mitchell and Farina Mir among others. Taking the debate on language politics further through the case study of Maithili language, the author intends to move beyond the given and established hegemonic discourse of Hindi-Urdu language debate that has dominated much of the language question since the late nineteenth century in modern India. The discourse pertaining to the nationalization of Hindi and making it a dominant hegemon particularly in the first half of the twentieth century India rested upon the politics of classification and categorization of languages and dialects whereby the latter were subsumed and listed under the major languages. The numerical dominance of Hindi over and against other languages was made possible by listing Khari Boli, Bagheli, Bundelkhandi, Rajasthani, Braj, Awadhi, Bhojpuri, Magadhi, and Maithili among others as dialects of Hindi. This sort of enumerative logic had obvious political goals to achieve particularly during the years of 1920-50s when the communalization of the language question with respect to Hindi-Urdu had already been on violent rise associating and collating it with dominant identities of religion, caste, region and nation. The ‘Hindi heartland’ saw the communal polarization evoked through slogans like Hindi/Hindu/Hindustan and Urdu/Muslim/Pakistan during this period. Jha’s book shows why the rise and dominance of Hindi language were being interrogated and challenged by several other languages or dialects within the Hindi heartland itself.

The introduction analyses the contours of nationalism discourse in both western and non-western traditions which have addressed the category of language as a form of collective cultural identity. The Andersonian thesis of desacralization of Latin and rise of vernaculars along with the emergence of print capitalism explained the particular forms of linguistic nationalism in Western Europe. The author argues with much persuasion that the distinction between language and dialects or regional variants is not linguistically given or naturalized. Rather it rests upon a number of historical and political conditions, language and cultural elites’ perception and articulation of the demands of particular dialects or lesser known languages, their literary and leadership skills, organizational strength of particular language communities and their deep sense of political and cultural engagement and consciousness with dominant language communities and groups at a particular historical conjuncture.

The predominant concern for the author in this work has a dual character—one is to take Maithili out of the tag of simply being a dialect of Hindi; and two, to show the incredible level of social and political mobilization that Maithili had garnered in its favour of being a distinct language and identity of its own. The case of Maithili shows the strength and weakness of the Maithili community, its articulative capacity and negotiating processes which allow it a dialogical space and identity of its own. As the author says in the very beginning, ‘the forging of the modern identity of the Maithili community itself remained internally challenged and externally suppressed and suspected for a very long time. This study is an attempt to explore these layers of processes and politics through which a vernacular community does not just adapt to a new language but also attempts to create and assert the identity of its own’(p. 19). The developmental trajectory of Maithili has had both internal and external dimensions whereby the former shows its relationship with itself and the latter is more about distinguishing it from outside and from other languages and language communities at large.

The book provides an engaging discussion on the logic of categorization and classification and its impact on the movement. In this regard, the publication of grammar books and dictionaries laid the ground for intensifying competition among various linguistic communities. ‘Language, History, Nation and the Imaginary of Maithili Identity’ looks at a number of writings in Maithili magazines such as Mithila Mir and Mithila Mada among others that contributed to the increasing consciousness about the cause of Maithili in the 1920s when the idea of Mithila region (Desha) too begins to emerge in these writings. Chapters three and four discuss in detail Maithili language and movement over the next three decades of 1920-50. Hindi and Maithili contestation are most intense and conflictual during this period when both Hindi and Maithili literary elites and middle-class intellectuals begin to appropriate the given linguistic space. It is during this time that supporters of Hindi begin to claim Maithili as part of Hindi. Maithili speakers too, at this time, become more assertive and start showing the differences between Hindi and Maithili more clearly. The time had come to express the exclusive identity of Maithili language which now began to show its independence from Hindi by establishing the Maithili Sahitya Parishad (1931), by its recognition in Patna University and as a medium of primary education in Maithili speaking region as well as the publication of a large number of text-books in Maithili. All of these initiatives helped in consolidating and mobilizing the Maithili consciousness among diverse sections of the society.

The last two chapters in the book elaborate the trajectory of the Maithili movement particularly with respect to the political demand of separate Statehood for Mithila, demand for the correct enumeration of Maithili speakers in the Census records, its recognition by the Sahitya Akademi, demand for a separate university in Mithila, and inclusion of Maithili in the Bihar State Public Service Commission etc. In addition, the author also discusses the support and patronage extended to Maithili by Bengali middle-class literati, upper caste and class support to Maithili in Kolkata and elsewhere along with many non-Brahmins and non-Kayastha caste groups that joined in the movement.

Various language movements that have emerged in India over the last century have been situated within the vortex of tradition and modernity, political economy of print capitalism, state rationalization and standardization of languages, and their transformational impacts on the intertwined hierarchies of caste, class, religion, region, and gender. The modes and modalities of this interaction affected both the emotive and rational images of languages and language communities. Mithilesh Jha’s detailed and careful analysis of historical narratives and their literary-pedagogical expansion through a large number of Maithili intellectuals—writers, literary and cultural elites and language patriots at large—brings out the rich and unexamined world of literary sensibilities about their beloved Maithili language and its survival and emergence as a major dominant language in Independent India. The predicament of the Maithili language movement and its political outcome during and after colonial times shows how languages survive and compete with one another in a position of domination and subordination particularly in diverse multilingual and multicultural country like India. This sort of struggle became more precarious and difficult during the time of the national movement when numerous language movements and identities began to assert and challenge the hegemonic dominance of a few major languages. It is in recent decades that academic scholarship has focused on this area of regional and Pan-Indian linguistic forms of domination by drawing attention to vernacular histories, traditions and literatures particularly in North India. The unique character of language movements has alluded to deep scales of inequalities—social, cultural, economic and ideological—which overlap and reinforce hierarchies of caste, class, region, gender and religion to say the least. The efforts of nationalizing these vernacular histories resulted in forms of exclusion making some languages and linguistic traditions less visible and authentic while writing the national registers of new political-national forms of Independent India.

It is instructive to understand the democracy of languages, their distinctive modes of participation and mobilization along with their capacities to interrogate and confront the dominant linguistic ideologies and practices. The role of print and now electronic media, school text-books, and state regulated mechanisms to establish the classificatory logic of numbers of speakers of languages through census and survey reports enable us to understand the travesty and tapestry of language movements in modern India. Jha’s work is significant since it looks at the inter-relationship between language and dialects within the Hindi heartland and counter-efforts aimed at challenging the hegemonic expansion of Hindi and its political mobilization.

In the year 2003 Maithili was included in the Eighth Schedule of the Indian Constitution. In the Appendix, the author has provided brief biographical sketches of many renowned Maithili intellectuals, activists, writers and literary elites who provided much needed intellectual, cultural and political leadership to the Maithili language movement. It is a treasure house of archival sources drawn from a wide range of writings such as auto/biographical writings, census reports and records, survey reports, magazines and literary periodicals in Maithili, popular tracts and vernacular sources, some of which have not been used before. Despite the sophisticated analysis and rich archival sources provided, it is still not clear as to whether or how one can go beyond the politics of appropriation. Hasn’t Maithili been seen as a language of command, control and domination by other languages spoken by non-Maithili speakers in Bihar or Mithila? How does one capture this voice of silence of the lesser known or minority languages against the hegemonic authorship of Maithili in accounts of history and politics?  The contradictions over agency and collective identity of a language movement and its political predicament are central to several other languages in the same way as is the case with Maithili language historically.