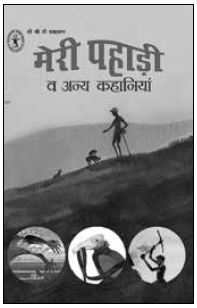 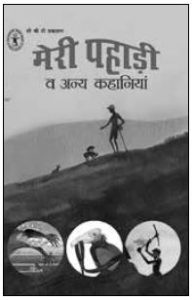 Meri Pahadi Va Anya Kahaniyan is a collection of eight stories in Hindi for teenagers. All the stories deal with the heroic, exemplary deeds of the protagonists that would certainly enthuse young readers to do similar things if chance arises. The authors have kept the language simple and made contemporary issues interesting for the readers.

The first story in this collection is ‘Aaj ka Bhagirath’. As we all know, Bhagirath brought the river Ganga from the Himalayas to the plains of North India after doing hard penance. The protagonist in the story by Sanjiv Jaiswal, ‘Sanjay’, does something similar to ease the water problem in his village set in Rajasthan where people are having a hard time fetching water from a hillock. The son of the headman of the village resolves the water problem with grit and determination and earns the title of a modern Bhagirath from the villagers.

‘Roshni ki Nayee Kiran’ by Suryalata Jaiswal deals with a boy Amit who raises very pertinent questions about the harnessing of solar power in his class and earns the respect of his physics teacher as well as his classmates. The story then goes on to describe the boy’s struggles in proving his ideas and how the teacher helps him achieve his goals despite his travails. The story is a bit grim but an interesting read.

Amitabh Shankar Rai Chaudhary’s ‘Karbala’ set in Peshawar is about the son of an Army officer who is a student of the Army school. It is all about the boy’s school life and how, on a day that he misses school, a sudden turn of events leaves him totally shattered. The theme of the story is what youngsters are seeing, hearing and facing in their real lives too, and so it will be of interest to young adults. ‘Tho Phir Kisne Bachaya’ by Rashmi Swarup Jauhari deals with the courage and presence of mind of the protagonist and his love for and expertise in wielding the catapult. It is very interesting to read how a young boy, home alone with his grandmother prevents dangerous thieves from executing their ill intention.

Sanjiv Jaiswal’s second story in this book, ‘Jab Tak hai Saans’ is about an adventure on a ship and how the sons of the Captain of the ship save the lives of the passengers. Their innovative ideas make for an interesting story. ‘Chutti ka Yaadgaar Din ‘by Deepa Pandey, deals with kindling environmental awareness. It is about young Vasu and his tadpole friend Chotu. Children will enjoy reading it. The next story ‘Park Fund’ talks about how anything can be achieved if you really have the will and determination. The author Suniti Rawat tells the story of how children in a colony transform a dump heap into a beautiful park. One has to read the story to know how that is accomplished. The last story, ‘Meri Pahadi’ written by Subhadra Malavi is the story of a braveheart, young, visually handicapped Gurung, all of twelve years who helps our Army to destroy an enemy camp on a hillock on the border.

I am sure that young readers will enjoy this collection of stories .