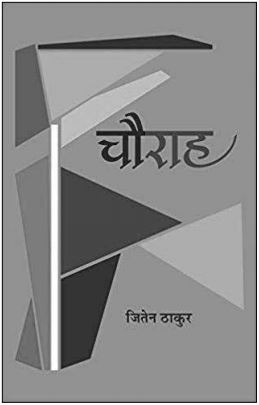 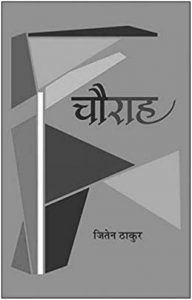 Jiten Thakur’s novel, Chauraha, filled with the myriad hues of human experience and diversity of human sensations is similar to the inventive style of Anton Chekhov in its depiction of a humour laced with warmth and gentle irony and comparable to Honore de Balzac in its representation of a milieu full of interesting characters. Dramatizing the multifarious crossroads that one encounters in the journey called life, Thakur’s novel leads the readers to examine and critique the intersections of various discourses like nation-state, institution of marriage, and gender roles which structure our society. At once funny and tragic, nostalgic and luminescent, grand in its metaphysical orientation and microscopic  in its representation of the little joys and troubles that beset humanity, Chauraha is a philosophical reminder of the vivacity of life itself.

Chauraha (‘Crossroads’)  swims in the lushness of memories and the translation of those ‘memories as music which reverberates’ in our mundane lives (my translation; p. 68). Jiten Thakur, a Doon-based author and an academic, is one of the best known emerging writers of Hindi fiction and poetry. A well-known name in the Hindi literary world as well as being a very popular writer  in the Dogri language, his writings have managed to capture the struggle of living amidst the changing socio-political topography of India. His style and themes apprehend the different colours of life with an amazing sense of poetical ardour and level-headed intelligence.

Set in an unnamed village in contemporary postcolonial India, the novel opens with Bua who is framed in her role as a wife and mother. Initially cast as a passive woman, resigned to despair brought on by the changing fortunes of her family, Bua’s innate strength is mirrored in the small details of her understanding a dumb boy of the village, Mohan, whom no one cares for and in her feeding the young school children of the village. Trying to contend with the apathy of her husband towards their only son, Bua’s life is an unmitigated struggle, due to desparate economic circumstances. Her husband, Chowdhury, who was once one of the most respected and wealthy persons of the village, seeks to deal with his changing fortunes through ritualistic iterations. As much as we feel for Bua’s simultaneous stoic and submissive attitude toward life’s problems, Chowdhury in his need to repeat Winston Churchill’s speeches at the small café in the village, documents the void that shapes life at every stage. He looks more vulnerable than Bua clinging to the mirage of respectability and continuity of rituals.

Their only son, whose name isn’t ever mentioned in the novel, is one of those prodigal sons who for eternity choose to follow the path of destruction. However, it is this errant and wayward son, a thief and a drunkard, whose chance meeting with Chabeli dramatizes the crossroads––of life versus death, loss versus gain, humiliation versus respectability, and love versus lust. Chabeli, a rural woman who is more educated than the others of her village and much admired for her beauty by the villagers, is first introduced in the novel as having been cast out of her home because she had committed adultery. Her desire for power and her resistance to  the gendered limits that binds women within a patriarchal society frames her as an outsider within the institution of marriage and also, codes of acceptable morality. Labelled as a loose character and almost killed off by her husband, Chabeli’s initial framing within the novel is on top of a hill, out of bounds of society. Her chance encounter with Chowdhury’s son interrogates the rigid contours of legality versus illegality and materiality versus spirituality. Chabeli’s stay at the temple is similar to Raju’s character in RK Narayan’s novel, Guide (1958). Here, also, through falsehoods created by Bua’s son, she is classified as a spiritual woman whose divine energy shall guide the whole village. However, unlike Narayan’s Raju, Chabeli refuses to sacrifice her desire and will to live life in all its rich connotations. In Chabeli’s refusal to be the spiritual guide of the village, she throws off the yoke of authoritative spiritual and nationalist discourses and thus, embraces a truer version of herself. Also, Thakur registers in a light sarcastic vein, the discourse of divinity that one encounters in one’s experiential life as being nothing more than a narrative of forged appearances and derivative history.

The novel critiques the unambiguous façade of appearance as reality and provides more than a glimpse of familial relationships. His novel interrogates the silences that mark the contours of a marriage and also, its sanctimonious façade. The book through chance meetings and strange happenings questions the social commentary which tends to fix the identity of an individual and thus freeze their desires. This becomes more apparent in the characterization of the fake Baba who provides shelter to Chabeli after Chowdhury’s son rescues her from near-death experience. This Baba who resides in the temple of a nearby village is, we learn in his reminiscence to Chabeli, no spiritual man but a murderer. However, similar to the montages of the son and Chabeli, the identity of the murderous Baba is cast off when he meets Chabeli. At this late crossroads of life, this fake and murderous Baba turns out to be a ‘true’ father to Chabeli. Through the persona of the Baba, Thakur presents the role of the father as not being  shaped by history, heredity or tradition but by a desire to know, empathize and understand the other.

Thakur’s novel depicts that what is believed as false and truth is only a matter of narrativized performance. Chand Bibi, a Pakistani woman who inadvertently lands up in India, starts afresh and makes India her ‘home’. Her ‘home’ opens up a space beyond the discourse of the nation-state and its reified boundaries provoking the question as to whether home is to be identified with the space of a nation or one which is to be recognized as shaped by relationships. Also, the trope of ‘home’ highlights the underlying violence of Partition in its framework of nation, sense of belonging and citizenship. Like the curtain which frames Chand Bibi’s home and demarcates the space of inside versus outside and, the private versus public, Thakur encompasses a life comprised of many layers, at once hidden and visible and rich in its complexity and dynamism—a life understood to be forever in flux. Characters like Badi Bebe and Choti Bebe swim in the river of memories and yet, are desirous to live life in its entirety. If Choti Bebe’s yearning for different items of food even as her face is lined with wrinkles and Badi Bebe’s constant travelling back and forth in her memories are a means to overcome their loneliness, shattered hopes and the crumbling of ordinary dreams, Chauraha also suggests desire cannot be contained within the discourses of age, gender, class or caste. In Chauraha, the omniscient narrator is found residing in the nooks and corners of our memories. This narrator is non-judgemental of the persona of the characters allowing readers to embrace the love and warmth that permeates human relationships formed in strange gatherings and bizarre pathways. The narrator’s observation of the society in negotiating the different crossroads of life through wit, courage, love, and laced with a quiet humour is not only engaging but also provokes the question as to what constitutes humanity. This novel participates in the fluidity and unpredictability of life where love is the only constant.

Thakur’s novel overflows with the themes of unfulfilled wishes, indeterminate histories connected in strange ways and the frustrations and misfortunes of broken families denoting the tragedy of the historical event of Partition. Clustered with vignettes of memory and contending with the passage of time, the book like its title mirrors how people from different milieus with varied experiences of life encounter each other at a certain ‘crossroads’ of life and contend with the absence of loved ones, loss of a familiar way of being and a constant need to redefine life outside the patriarchal interests of family and nation.  There is a universal dimension to the portrayal of the intermeshing of lives of different characters in their lack of proper names and denoted only by their relationships. In Chabeli’s case, however, the articulation of her name mirrors her irreverent attitude to the conventionality of traditions and the hollowness of rituals. Also, her proper name particularizes her subjectivity and as such, the novel documents a feminist perspective. Chabeli’s characterization foregrounds an inborn strength to live life on one’s own terms and portrays the change and dynamism required to forge alternate histories.

Chauraha in its different encounters and chance meetings of people, the criss-crossing of past and present in our memories and the intersections of various societal beliefs connotes the variability of meaning, history and individuality. Thakur’s novel in an evocative manner portrays life and its many moments.

Never dull, never static, at times elusive, at times ugly, and at times sitting right beside us as our companion, life in this novel has a way of making us aware that it is  beautiful and ugly, romantic and rational, material and spiritual––all conjoined together. Thakur’s artistry is delineated in the way he unfolds and unpacks the veritable experience of quotidian, felt life, with the ever-changing hues of human emotions. His is the artist’s eye observing  society at its performance and being himself surprised with what he encounters. It is a fascinating and highly engaging work traversing the little joys and big desires that comprises humanity.

Indrani Das Gupta is an Assistant Professor (Ad-Hoc) in the Department of English, Maharaja Agrasen College, University of Delhi, Delhi.