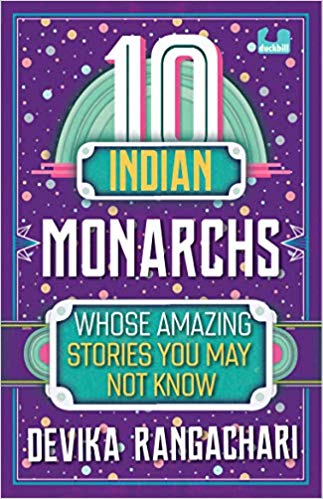 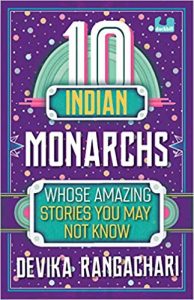 This slim volume takes us on a whistle-stop tour of many kingdoms where we meet kings and queens whose names are not unfamiliar, but about whom we might have known just a few sketchy facts.

Author and historian Devika Rangachari breathes life into them as she weaves vivid portraits that step out of their frames and speak to us. Facts gleaned from various historical sources are arranged in a manner that you get glimpses of various geographies and periods of Indian history as read in school. Since her work as a historical research scholar has been largely on late ancient and early medieval Indian history, she has chosen rulers from that period. In her introduction, she suggests it is an idiosyncratic selection but it is clearly more than that. She has a strong stand for many of her choices as she rescues characters from obscurity using her resources as a historian and the need to parse facts that shed light on what constitutes our understanding of history at different points in time.

Rangachari writes, ‘There are very few women rulers written about in history text-books, not just in India but all over the world. It is true that the majority of rulers were male, because most monarchies are patrilineal. But there were more women rulers than history books list and wives and sisters and mothers of kings frequently played more significant roles in policy and administration, which are not necessarily catalogued in text-books. When you consult the actual sources of history such as coins, inscriptions and contemporary text, you often get an entirely different picture of the role that women played in the political, social, economic and religious spheres.’

The very welcome inclusion of Didda, ruler of Kashmira from CE 980/1 to 1003, Abbakka , ruler of Ullal from c.1525 to 1570 CE, Chand Bibi, ruler of Bijapur and Ahmadnagar around the 1580s and Ahilyabai Holkar, ruler of Malwa CE 1767 to 1795 among her ten Indian monarchs with fascinating stories, is reason enough to grab this page turner. The overt neglect of the role of women in history is very much in line with a patriarchal world view where their very existence is defined by how they prop up men who are supposedly the drivers of action—political, social or economic. This world view is being challenged repeatedly in all spheres and history is being re-examined from multiple perspectives to arrive at a more complete picture. As you look at the facts gleaned from various sources through the kaleidoscope of time, the pieces shift to reveal new patterns that make up entirely new dioramas.

In citing the various sources that are used to build a picture of times past, Devika is also educating us about how histories get written. The example of Ashoka that she uses underscores this rather well: ‘An example of how rulers may slip into obscurity is Ashoka, the third century BCE Mauryan ruler. Today, the story of his grand spiritual transformation from violence to nonviolence is well known as he documented this all over his vast empire most innovatively through inscriptions on pillars and rocks, and the Ashokan lions are used as the national emblem. Yet, until these records in the Brahmi script were deciphered by Indologist James Prinsep in the nineteenth century, Ashoka had been completely forgotten for some centuries.’

If a towering figure like Ashoka whose place in our collective imagination seems immutable, can be so subject to the vagaries of time and chance, the project of carving out a due place for women rulers takes on even greater significance.

The story of the powerful Didda drawing sanction from mythological tales of Kashmira being a material manifestation of the Goddess Parvati to the much more material manifestation of her name appearing on coins along with her husband’s, is deftly told. In fact, Devika hilariously finds a parallel in the name of Diddakshema as found on the coins of the period (Didda was the second wife of Kshemagupta, the king) to WillKat! But her commentary also uses direct quotations from books on Kashmir to reveal massive gender bias in how Didda has been portrayed. Instead of acknowledging her powerful rule and influence, they’d rather describe her as ‘…monstrous and dissolute. And she had a fatal weakness in her character, didn’t she, because she did not kill herself on her husband’s death but decided to live on?’ The tales of Chand Bibi and Ahilyabai Holkar, closer to us in time, are no less fascinating and the one thread that is common to all the women’s stories is the sexism that they had to endure, in addition to all the other intrigue and power struggles.

The other rulers such as the comparatively familiar Ajatashatru, Bindusara, Pulakeshin and Harsha to the relatively little known Rudradaman and Ramapala all have points of interest and often they have interconnections. Reading about their intertwined stories is somewhat like watching an old photographic print develop in a chemical bath in the darkroom. Their faces are in shadow but you can almost imagine them going to battle or ordering an inscription! Rudradaman’s story as the restorer of a lake was a very pleasant surprise among tales that are mostly about conquests and alliances. As stated by the author, ‘nothing in history can be read or understood in isolation. There were webs of war, rivalry, marriage and exchange that are continually forming and dissolving, and it is vitally important to acknowledge these and appreciate their significance.’

Reading this, one is tempted to say ‘…things have not changed much.’ But then, this is why we read history—to find a thread between our past and present. Devika’s book gives an interesting twist to this link.