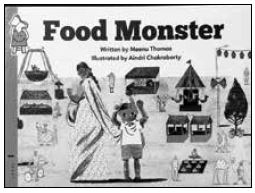 THE MYSTERY OF THE CYBER FRIEND

All published by Pratham Books, 2019

The five books that are reviewed below and the many others that I have read before, makes me wonder at the spectrum of quality that one finds in Pratham Books, as they range from excellent to mediocre to simply substandard..

Before reviewing the five at hand let us quickly look at Pratham’s classification of reading skills:

1 For children beginning to read/ read aloud: This level needs to be visually gripping and have a read aloud quality, apart from the obvious—a good story, a story that the child would want to hear again and again.

2 Learning to read: Again, visual appeal is very important here along with very simple vocabulary—short words and simple sentences. This would be the story teller’s challenge—tell a good story in the simplest words possible. It is also a good idea to keep space in the structure to explain words that are difficult.

3 Reading independently: I would assume that the average age in this level would have children between the ages of 7 and 9. They would have the ability to understand new concepts if explained simply and interestingly.

4 Reading proficiently: One would presume the age group in this category to be 9-10 to 13.

In today’s age of ease of access to information, the writer would have to have a very good idea of what kids of this age would know. An understanding of tween and teen psychology would be needed to grab their attention. The range of pre-knowledge is so wide that there is a danger of making your tale too childish or too adult. 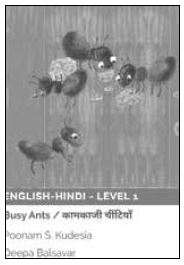 Anna Daitya is a simply written and well translated story in Hindi. It tries to teach shapes via food items that we eat. It is not very clear why the author deemed to call them monsters. It might have been interesting to give that honour to the boy in the book. It would have ended the story more dramatically, with the crunching and crackling sounds being made by him. It would have also made trying new foods an exciting aural adventure for the young ‘readers’. As this is a level 1 story, and as some foods are region specific and need explaining, many children will have no clue what sound a patishapta or a pomfret makes. Nonetheless, it is a sweet story, well told. The use of Gyotaku printing is wasted in a level 1 book. The book simply mentions what this technique is in two sentences in the back page blurb. The reader would have to look it up to understand the technique if they want to explain to the child.

Busy Ants/Kaamkaaji Cheentiyaan is an English-Hindi bilingual book. This read aloud book on ants talks about how ants travel silently, use their sense of smell to find food they like and avoid danger (like soapy water). It tells you how despite being tiny, they are strong and how they can reach food through the tiniest gap. The story ends with a picture of an ant hill and the final closing line, ‘Believe it or not, hundreds of us live happily in a colony.’

Why is this book called busy ants? There is nothing especially busy about most of the activities described in the book. As for Kaamkaaji Cheentiyaan in Hindi, Kaamkaaji is not a child’s word. It is not even accurate. It is normally used to denote business-like or professional, not busy. Be that as it may. 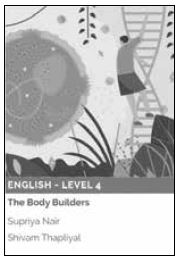 In a small 12 page book the first page is wasted on making the fourth ant the narrator of the story and again another one to show the narrator ant wanting to get skates to move faster. Making the story anthropomorphic has not made it more interesting but has in fact sacrificed space that could have been used for other interesting facts about ants. The most disappointing part is the ending which does not explain what an ant hill is and how they make it (which would definitely justify the title Busy Ants.)

There are so many facts about ants that are interesting and totally accessible; the fact that ants really work together to move and transport food, material to build ant hills, how female ants are worker ants and do all the work, how there is a Queen ant and lots of male ants whose only job is to make baby ants along with the Queen,

The story is disjointed and inane. I doubt whether a child would ask for it again and again unless it is to see the illustrations which are the redeeming part of this book.

The Body Builders is in English and attempts to explain the concepts of DNA and Genetics to children who can read proficiently, which would be roughly children above the age of nine or ten. There seem to be a couple of assumptions made while writing this book. First, that the reader has the knowledge and understanding of terms employed in this book, like organs, organisms, cells, building blocks, blue print, to name a few. Second, it assumes pre-knowledge of what cells are. The author gives an example of a pomegranate to explain what organs and cells are. This does not explain how cells merge, multiply or divide. 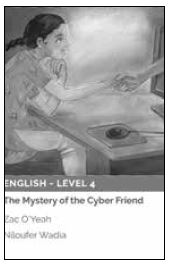 The beginning is very promising with a child noticing the growing genetic similarities between his baby sister and the rest of the family. After that it gets lost somewhere trying to connect this to DNA. The author gets distracted describing DNA and its spiral noodle-like shape and its similarity to a blueprint of a house and stating how the two strands of DNA denote genes from mother and father. This is confusing to a child as it does not explain how the baby in the story has features like brother, mother, maternal aunt and grandmother. The story ends with a nice touch about the need to be healthy to allow DNA to do its work.

In short a great idea well begun and well ended but with the most confusing middle which is the real subject matter of this story. It is not simple enough for children who are being introduced to the subject and too simplistic for those who have already learnt a bit about this in school. The illustrations are good.

The Mystery Of The Cyber Friend in English deals with the need for caution while enjoying the social media on cyberspace.

This is a well-written book of great relevance. It is about a thirteen year-old girl who appears to be first generation computer literate and falls into the trap of befriending an unsavoury man posing as a thirteen year old girl on social media. The plot is skillfully developed and characters of the protagonist Shree and her aunt are robustly etched and are very believable. A story with a happy ending, it brings home the many cyber safety points that should be kept in mind while using social media. It also brings home the importance of confiding in a trusted adult when in doubt or in trouble.

The illustrator has obviously not been very particular and the features of the teenager and the aunt keep changing and the teen keeps fluctuating in the same time period between two plaits and one. But the story is gripping, so this does not really detract.

The last book is in Hindi and called Antariksh Mein Makkhee and is about Fruit flies, informative, well written and well translated. New knowledge is well balanced with an entertaining story line. In this story, two Fruit flies travel into space with a young space scientist so that she can study them. One fly is a male who loves to fly high and the other is a female who loves to pose and posture. The writer has not cluttered the story with scientific and biological facts but has explained them in very simple language at the end of the book. Here is a story where anthropomorphizing the insects works to add humour and body to a true story. Even the names given to the flies, Droso and Phila are playing on the scientific name of the Fruit fly, Drosophila. The illustrations are very sharp and capture the humour in the story. Just a couple of observations: The poor Fruit flies are housed in a bottle without apparent ventilation. Any child who has ever tried to capture an insect in a bottle knows that providing food is not enough. Without air they would surely die before reaching space.

Sandhya Gandhi-Vakil has been involved in writing and telling stories for children, translating stories from English to Hindi and selecting films for Children’s Film Festivals. She combines craft with story telling and performance for children and teachers.