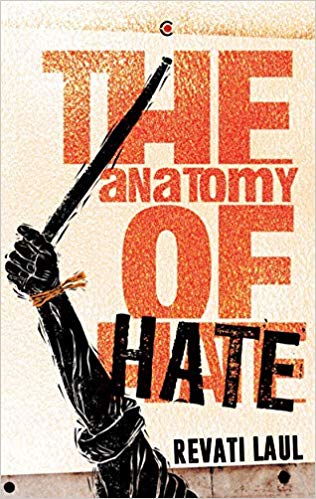 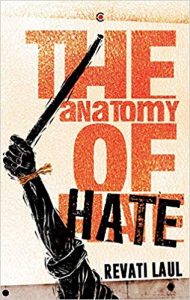 Gripping, agonizing, stomach churning.  The Anatomy of Hate is all of these, while also holding up a subtle, insightful and illuminating mirror to modern-day Indian society.

Revati Laul devoted more than ten years speaking to scores of persons about the sectarian violence that engulfed Gujarat in 2002; prising out excruciating recollections, trying to make sense of the motivations of the participants and delving into what drives mob behaviour.  The result is this disturbing book that describes the trajectories of the lives of three young men who were intimately involved in the horrific events of 2002. A book, which—counter-intuitively—is not devoid of hope. Laul attempts to get into the heads of the perpetrators of the violence in order to comprehend the basis of their hate.  In vivid detail the book goes on to describe the guilt and fear they carried and what happens thereafter.

Suresh was born into a family whose avocation was crime.  Polio having given him an ungainly limp, he was the butt of taunts, especially from his father. Lacking self-worth and consumed by anger, the unlettered Suresh slipped rapidly into a violent underworld driven by bootlegging, theft and extortion.  Not averse to demonstrating his masculinity through abduction and sexual assault, he built up a fearsome reputation in Chharanagar, the Ahmedabad slum bordering Naroda Patiya, a Muslim-dominated neighbourhood that suffered some of the worst atrocities of 2002.  In Laul’s words: ‘It was in this part of Ahmedabad city, which law and justice systems had long ignored, that the most testosterone-driven, sabre-rattling arm of the Hindu right—the Bajrang Dal—decided to proselytise’, recruiting Suresh and other malcontents like him.  On 28 February 2002, Suresh not only indulged in targetted arson, killing and burning of his Muslim neighbours, but also in rape and in the egregious disembowelling of a pregnant woman.

Dungar is a Bhil tribal, intelligent and canny. Bullied by upper caste schoolmates, he repeatedly ran away from his village school till he was taken in by his teacher as a boarder.  His teacher was everything his alcoholic father was not: God-fearing, upper caste, vegetarian.  Dungar avidly soaked up Hindu mythologies and, increasingly, adopted caste Hindu ways till he began to insist that he was actually a Rajput whose family had procured scheduled tribe certification through bribery in order to avail of government reservations. Laul says, ‘this low self-esteem is what allowed the Sangh Parivar to draw him so easily into its fold as a forever-insecure Hindu’, and helped him forge a new identity.  Aspirational and ambitious, he enrolled in a bachelor’s degree by correspondence, joined a technical institute, and worked at multiple jobs simultaneously, till he was hired for tribal welfare work leading to the establishment of his own welfare association.  As his influence expanded, he became a valuable organizer for the Vishwa Hindu Parishad.  When Gujarat went up in flames, at the behest of the Parishad, Dungar—not without some misgivings—led a group of villagers to burn down the Muslim establishments in his village.

Pranav was brought up with a natural sense of entitlement that came from caste privilege.  But his tradition-bound family and the stultifying social hierarchy in his village spawned embers of revolt in the self-willed boy.  Chafing at his father’s insistence that he study science, he deliberately failed his high school exams.  Written off by his parents as a drifter who wanted nothing more than to play cricket, Pranav hoped to be an English teacher and enlisted for a bachelor’s degree by correspondence, before moving to university in a big city.  When Gujarat was hit by a devastating earthquake in 2001, Pranav volunteered in the relief and rehabilitation work, whence he witnessed the organizational skills and indoctrination efforts of the RSS at close quarters.  At the time of the conflagration he was leading a carefree student life: a seemingly insouciant but intense young man, popular among his peers for his confidence and non-conformity.  While not bearing a personal animus against Muslims nor desiring a share of stolen goods, he was clearly on the side of the celebrants enjoying his role of voyeur as his mates embarked on a spree of looting and burning.

Laul notes that it was not simply the dark machinations of the Sangh Parivar that determined behaviours when the rioting began.  Nor were the horrors that were committed an inevitable outcome of past experiences of the actors.  Although the three protagonists may have been wired in such a way that made them comparatively more receptive to the tidal wave of hate that swept the State, it was their personal backgrounds combined with chance, circumstance and choice that moulded their responses. Laul likens the day the rioting began to ‘a black hole that bent time. In the lives of Suresh, Dungar and Pranav, it rearranged all previous days and experiences.’

The three protagonists reacted to the conflagration in differing ways: Suresh resorted to hedonistic violence; Dungar’s act of arson was a means of self-advancement; Pranav, whose attitude to Muslims was merely one of disdain, derived vicarious gratification from the proceedings.  Regardless of their specific responses, it was a denouement that would shape their future lives. The way events would play out for them over the next fifteen years demonstrates what Laul calls the shifting shape of the anatomy of hate.

Suresh was arrested not long after the violence ceased.  His seething anger was focussed on Muslims who testified against him and, increasingly, on his wife—a Muslim, whom he had married out of spite—whom he assaulted with mounting severity on his periodic visits home on parole.  He was eventually sentenced to thirty-one years for murder and rape.  His case was sealed by a conversation bragging about his brutality that he had with an undercover Tehelka reporter.  As Laul says, ‘the bragging was the whole point’: it fulfilled the fantasies of others like him; he regretted not his deeds but his carelessness at having been caught.

Dungar was filled with remorse for having destroyed the homes and livelihoods of a dozen Muslim families, the more so when he saw their reduced circumstances.  Goaded by a Christian NGO, he mobilized his fellow villagers to rebuild the houses and enable the return of the displaced families.  His growing popularity brought him to the attention of the Sangh Parivar, and he contested and won the post of taluka pramukh, going on to become a well-heeled middleman with a palatial house and new wife. Fifteen years after the happenings of 2002, Dungar had thrown his political lot with the Congress Party.

Pranav, the least involved of the three in the actual violence of 2002, experienced a slow and comprehensive unravelling of his identity.  Engaged by a NGO to work on post-violence reconstruction, he saw for himself the dreadful human suffering that had resulted.  Working with Muslims exposed him to their religion and culture, and opened his eyes to his own ingrained prejudices.  He saw how deeply the ideas he had grown up with were connected with sectarian violence. The cathartic re-examination of his beliefs and identity brought on a nervous breakdown and a metamorphosis in his value system.

The lives of the protagonists subsequent to the riots, Laul asserts, show how extreme prejudice can be unlearned.  This is the thread of hope that illumines this remarkable book. While the Sangh Parivar may have orchestrated the events of 2002, what happened later was out of their control. ‘The Anatomy of Hate’ is not that of an undifferentiated mass, but of an amorphous mix of opportunistic choices and circumstances.  This book makes a useful contribution to understanding mob violence and the nature of ochlocracy and, indeed, to comprehending the way politics works in India.

It is noteworthy that The Anatomy of Hate was largely crowd-funded by more than a hundred people.The author calls it a collaborative effort, and though she fears that it may have been ‘profoundly foolish’ to tell the story of a mob through the lives of three individuals, her collaborators will not be displeased with the result.

Govindan Nair is a retired member of the Indian Administrative Service.