Unravelling ‘The Enigma Of Being’ 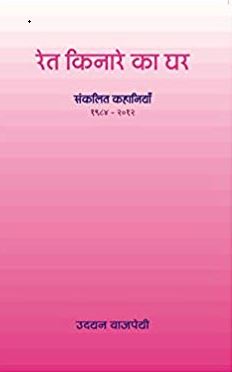 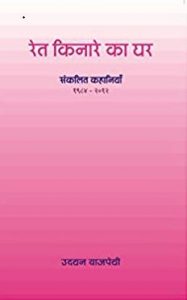 Ret Kinare ka Ghar (2018) gathers short stories written over three decades. One sees many continuities over the years—such as of imagery and ambience—but also unsuspected, astonishing departures that lift the writing to an order of art where the achieved wholeness defies any repeatability. There are at least two stories in this book of 31 that continue to astound and elevate this reader every time he reads them: ‘Ret Kinare ka Ghar’ and ‘Tasvir’.

In the prefatory note to the book, Vajpeyi candidly declares his faith and pursuit. The title of the note calls it, compactly, the enigma of being. The characters struggle to unravel some enigma at the heart of their being, and through them the writer seeks to penetrate the mystery of existence from some unnoticed, unvisited angle in time and space. A writer, according to Vajpeyi, can be recognized by the questions that take shape in his writing and through which he tries to enter this infinite thing called life.

But this is not as simple as it seems. At the centre of the writer’s work is the challenge of form. To be writing a story, Vajpeyi observes, is to be asking of language what it means to write. And he goes on to say that a story is the way it is written: it is its form. His aim, he adds, is to realize a story poetically—the poetic being the condition of fiction. An insight as profound as this into the writer’s art, and worded with such lucidity and finality, is telling. One can see this insight instantiated in those numerous sentences that rise like islands of magic in the stories, bearing the promise of renewal of not just our sensorium but also of our whole cognitive apparatus. Sample this: ‘See, the night falls. Perhaps tonight is the turn of the full moon. Foam will spread far, like silver’ (‘Ret Kinare ka Ghar’). And this:’The sunshine was baring its hidden brilliance’ (‘Satvan Button’).

Vajpeyi’s sense of the mystery of life probably explains his abiding fascination with the fantastical. You find it in the very first story here—‘Identity Card’. And it marks several others—‘Avaz’, ‘Dastaken‘, ‘Rastey’, ‘Lambe Raja ke Ansu’, ‘Tasvir’. Of these, Avaz is the most (and almost self-consciously) Borgesian. And it is also metafictional in the way some post-theory writing is: the foregrounding of syntactical architecture by way of strategic repetitions ‘echoes’ the futile quest for the Voice, for self-present meaning, for the transcendental signified. And embedded gently and disturbingly in the narrative is an image of deprivation, helplessness and violence: of the abduction, by a group of young men, of a poor woman urinating at night in an empty street.

Violence lurks just under the surface in many stories—and that is where Vajpeyi handles it best. When it erupts and explodes, things tend to go out of hand and melodrama threatens to take over. ‘Griha Pravesh’, ‘Chehre‘ and ‘Satvan Button’ all wilt somewhat under the shadow of melodrama. What makes ‘Griha Pravesh’ unforgettable, in spite of the somewhat repulsive encounter with the corpse (repulsive because it rubs awkwardly against the dominant emotional register), is the extreme tenderness of sentiment and the convincing abruptness of the suicide. ‘Chehre’ survives melodrama partly on account of the force and pace of narration that carries the story along and partly on account of the complex, subdued use of the fantastical which brings the narrator’s deceased mother alive in the victim of abduction and later in the features of his four daughters. The play of mirrors—in which the victim, the mother and the daughters endlessly reflect one another—leaves no place for the man to evade guilt.

‘Satvan Button’, woven ironically around the moral imperative of ‘know thyself’, is remarkable for the considered indefiniteness of its ending. Yet how much better—utterly wonderful, indeed—these stories would have been if the ‘melo’ of melodrama had been disallowed! An exceedingly well-crafted story, ‘Restaurant’, is undeservedly and completely ruined by its melodramatic tail, by what is no more than an unnecessary tag of a paragraph. After the splendid dreams of flying set against social disapproval (crystallized in vague memories of dead parents forbidding risk and freedom), the woman is reported to ‘have, meanwhile, lighted a cigarette’. To merely report this ‘momentous’ event, the narrator unceremoniously jumps on to the page. An excellent story, having proceeded effortlessly on understatement and suggestion and having moreover artistically ended, stands reduced to ashes by the inappropriate intrusion of a cigarette.‘Raat ke Musafir’ builds up slowly, gathering depth and complexity. The narrator and the author almost mingle yet are kept distinct by the gossamer-like fine artifice of literary language (enhanced by extensive use of words from Urdu). There is a narrative within a narrative, but the borders interfuse so as to produce effects of a third-order narrative. Vajpeyi delicately tackles the extremely difficult subject of childhood eros, that too without relinquishing either the point of view of the innocent child or that of the adult tormented by memories. And the memories are not all sweetness and light; they also hold an aloof and indifferent father and a dead mother—which adds another layer of resonance. ‘Raat ke Musafir’ is more than a story; it is also memoir, travelogue and a psychoanalyst’s journal.

Far apart from this kind of writing and not sharing anything much with the postmodern fantasy either are the two truly strange tales: ‘Lambe Raja ke Ansu’ and ‘Bilaute ki Pasand’. The first may perhaps be called a fairy tale, the second a fable. But the fairy tale in this instance has much more than the stuff the fairy tales are usually made of. ‘Lambe Raja ke Ansu’ transcends meaning, transcends even the need for meaning. It is pure literature, literature under its own law, autonomous—fiction realized as poetry. Strange, humorous, moving, it stuns. Vajpeyi completely achieves his artistic aspiration in this story.

If the enigma of being is what inspires his imaginings, he could not have left ‘reality’ to itself. This explains to some extent his recourse to fantasy, which in his hands becomes a method and a tool to probe the nature of reality. But he does not rest satisfied there. He would dislocate reality to fathom human grief. This is what he does in ‘Tasvir’. You can go, if you want, hunting for rational, ‘scientific’ explanations to elucidate the grieving daughter’s ‘conclusion’ (and closure). Yet the story exudes its own rationale, which makes it as rounded and complete and self-sufficient as the cosmos.

In the title story, ‘Ret Kinare ka Ghar’, the writer turns to writerly existence. There is something fatalistic and prophetic brooding over it. To write is, after all, to build a house of sand by the sea; to know that waves will one day wash it away, ‘unwriting’ everything. Yet the acceptance of this inevitability would release the writer from the shackles that bind him and also bind his writing. He can now let his stories be. And they too let him be. Self-centered effort turns around to yield effortlessness. The agent of action—of writing—becomes a witness. It is a Hamletian consummation, ‘devoutly to be wished’ for. And gloriously tragic.

Rajesh Sharma is Professor in the Department of English, Punjabi University, Patiala.