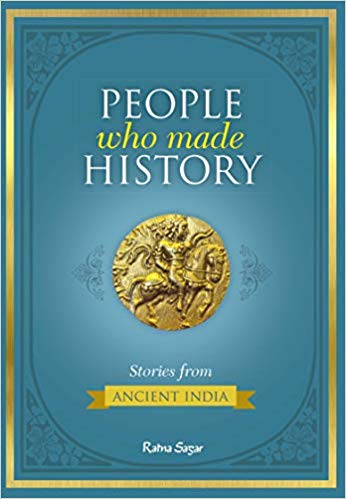 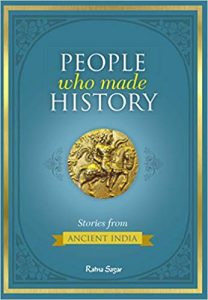 History has earned the partly-deserved notoriety of being a dreary subject with an overload of factual detail and dates. So there is clearly a great need to make the subject interesting and engaging for young people. The lives of individuals are a good way of humanizing the past and making it less drab and abstract. Life stories well told can engender interest, reflection, empathy and wonder. Both these books take on this important task with verve and enthusiasm, though in various ways.

People Who Made History: Stories from Ancient India is a slim book consisting of twelve chapters, written variously by Nilima Sinha, Nilima Jha, Nita Berry and Neera Jain. The subjects are well-known figures—Gargi, Siddhartha, Chanakya, Chandragupta Maurya, Ashoka, Charaka, Gautamiputra Satakarni, Samudragupta, Fa-Hien, Kalidasa, Aryabhata, and Pulakesin II. Most of them were politically powerful men, but there are also a woman, poet, mathematician-astronomer, scholar, and Chinese monk. Recognizing the importance of visuals for young readers, the text is interspersed with drawings (the name of the illustrator is unfortunately not mentioned). A few endnotes explain Sanskrit terms or unfamiliar words. The stories are interspersed with snippets of information on miscellaneous issues such as the rise of Jainism, Pattachitra, Nalanda and Natya-shastra. There are no dates in this book, obviously a conscious decision.

The introduction tells us upfront that the authors have blended fact with fiction, history with legend. Characters, events and conversations are invented. Instead of summarizing a whole life, the focus of the narration is on personalizing the stories and highlighting a few key dramatic events. The stories are told from different perspectives, sometimes in the third person and sometimes in the first. The use of the latter is quite effective. Samudragupta’s story, for instance, is told from the perspective of Harishena, and Pulakeshin II’s is presented as a first person account. The authors state that their aim is to talk about famous people from ancient India who left an imprint on history, who did radical things. Presumably, the aim is also to offer inspiration to today’s young.

The authors have done a good job of telling the stories in an engaging way. Of course, if looked at from the historian’s point of view of accuracy, questions can be asked about liberties that are taken with historical facts, even about the very existence of one of the figures, namely Chanakya. It is the subject matter that creates issues when the audience consists of children. I am uncertain about the extent to which young readers will be able to connect with the philosophical aspects of Gargi’s debate, the Upanishadic search for Brahman, Siddhartha’s search for truth, Gautamiputra seeing the divine light, or the complex vocabulary of Ayurveda. This is a part of the larger general problem of writing history for children.

Archana Garodia’s book caters to an older, more mature age group and tries to remain scrupulously faithful to the historical facts. There are quotes from translations of original sources and from the writings of historians. The focus is on politically powerful women across the ages. The exciting cast of characters includes better and less known figures—the Bhauma Kara queens of Odisha, Didda, Raziya, Rudramadevi, the heroines of Chittor, Durgavati, Abbakka, Chand Bibi, Nur Jahan, Karnavati, Mangammal, Chennamma, the Attingal queens, Tarabai, Ahilya Bai Holkar, Velu Nachiyar, Begum Samru, Kittur Chennamma, Lakshmibai and the Begums of Bhopal. The stories of these women are interspersed with pages on more general issues such as interesting fruits, eras, and the origin of certain kinds of food. The narration is crisp and lively.

Archana Garodia’s book has dates and lots of dynastic history. But the main point that the author clearly wants to get across, and does so successfully, is that women have played an important role in political history across the centuries, that they were historically relevant people. The book is based on research and there is complexity in the narrative. For instance, in the discussion of Chittor, the author alerts readers to the distinction between history and legend; that in the case of queen Abbakka, we actually have two tales fused into one. There is also a welcome attempt to question stereotypes—for instance, the highlighting of the achievements of the Rajput women who have earned pages in history books not by committing sati or jauhar but through other kinds of noteworthy deeds. There are, of course, larger, difficult questions that emerge from the stories, which need to be somehow explained to children in simple, straightforward ways. How did these women achieve power, given that they lived in male-dominated societies? What was the importance of the family in ancient Indian politics? What do the stories tell us about times when religious identities were not cast as rigidly as they are today? How should we interpret the rhetoric of power in texts and inscriptions?

Just how radical, innovative and imaginative should the re-tellings of the past be for children of the internet age? How should the sex and violence in history be presented to children—through erasure or otherwise? Should the stories be simplified, or made more complex in order to correct popular misconceptions and biases? Do they necessarily have to be used as a vehicle for moralizing? Authors will answer these questions depending on their agendas and goals. The answers can only emerge through conversations with the children who read these books. But there is no doubt that more writers need to take on the challenge of writing books on history for children.