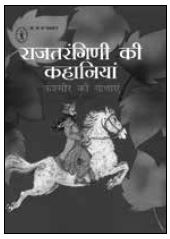 Devika Rangachari, the well-known story-teller, is an old hand at the Kashmir chronicle that is the Rājataraṅgiṇī of Kalhaṇa, having studied it at great length from what she has called ‘a gender perspective’. The book under review is a Hindi translation of her Stories from Rajatarangini: Tales from Kashmir (CBT, 2001). It is a well-chosen collection–though others like me will naturally have their own sets of choices–of sixteen stories (one told in two parts) from the work of Kalhaṇa. While using her own imagination to supply them with the required additional details for a riveting narration, the writer has generally been careful to keep the stories firmly rooted in their original content and context, and has succeeded in retaining the flavour of the times to which they belong. For this purpose, useful explanations too have been provided here and there, as in explaining the nāgas as ‘serpent deities of the lake’ (p. 5) or the dīnāra (dīnnāra in the original text) as ‘currency in coin’ (p. 114).

Rarely, however, there occur quite unnecessary and misleading deviations from the text. For example, in the last story (‘The Coins in a Lakh’), an adaptation of the Eighth Taraṅga (verses 124-156), we read about a nāga merchant whereas the original does not refer to or suggest any such association of the merchant, who is simply called a vaṇij, appropriately translated as Bania or Seth by RS Pandit. The story is about this unnamed Bania and a rich person, also unnamed. The latter has been turned into a hard-working person who has saved a good amount of money, which is all right (as are a few other insertions from Rangachari’s side); however, he has also needlessly been given a name of Vijaya. The historical flavour of these stories stems first and foremost from the retention of the original historical names, and Vijaya was not only the name of a celebrated king but also of other persons in the original text, and ought to have been reserved for those contexts. Also, the reader would be less puzzled if told that dīnāra in this story was a copper coin (as explained by Pandit in his translation of the Rājataraṅgiṇī, p. 77fn103), not of silver or gold as commonly understood.

Next, Ajanta Guhathakurta is to be heartily congratulated for providing truly evocative illustrations in the book.

The Hindi translation by Suman Bajpai makes for enjoyable reading on the whole, barring a few foibles. For instance, the title of the just-discussed story—‘The Coins in a Lakh’—means एक लाख सिक्के, not ‘लाख में सिक्के’ as done here. Similarly, on p. 63, ‘astonished king’ should have been translated as आश्चर्यचकित राजा, not ‘आश्चर्यजनकराजा’.

A technical point. There is a significant, though infrequently observed, difference in writing Sanskritic names in English and other European languages on one hand, and in Hindi or other Modern Indo-Aryan languages on the other. One writes Aśvatthāman, Rudradāman, and Sudāman in English, but अश्वत्थामा, रुद्रदामा, and सुदामा in Hindi. So Avantivarman should have been transliterated as अवन्तिवर्मा (pp. 93, 95, etc.); contrariwise, in the English version it ought to have been Hanumat, not Hanumān (p. 99).

It is the Hindi transliterations in the book that leave almost everything to be desired, and cry out for our urgent attention as the symptoms of a malady that has assumed the proportions of a virulent epidemic for some time. The following table (more than illustrative but not exhaustive) gives the scale on which the book perpetrates the distortions of proper nouns (allowing for the peculiarities of Hindi, as in doing away with halanta at the end of a word, e.g. सम्राट):

The sorry state of affairs, rather scandalously represented by the table, is in fact seen all around, as when the Hindi-medium students of NCERT (National Council of Educational Research and Training) history books read, year after year, as the names of the great saints, groupings and works of the Bhakti movement, मणिक्वचक्कार, अलवार, नयनार, नलयिरा, अप्पार, अंडाल, करइक्कालअम्मइयार, and सुन्दरार in place of  माणिक्कवाचगर, आल्वार, नायनार, नालायिर, अप्पर, आण्डाल, कारैक्काल अम्मैयार, and सुन्दरर. The sad scenario can at any time be easily witnessed at some of the most informed of chat shows and speeches.

In a sense this vandalization of knowledge is worse than perpetuating illiteracy. Its ineluctable beginnings and growth date back to the significant collective moment in our intellectual history, some half a century ago, when we began to abandon the well-established practice–even in school books–of providing diacritical marks, at least the macron for the long vowel. DD Kosambi’s Culture and Civilisation of Ancient India in Historical Outline (1965) is the last important book (for the general reader) in my experience that followed it. There can be no excuse for this grievous lapse: learning to add vowels to Indic consonants (e.g. क, का, कि, की, कु, कू, के,कै, को, कौ, कं, कः) in Class I takes more effort! I have written in some detail about this critical matter over the last five-six years (in articles that remain in hibernation), and been talking about it to my first-year undergrads for a longer span. I am glad to have been able to raise it in my maiden piece in this prestigious publication with an extensive profile.