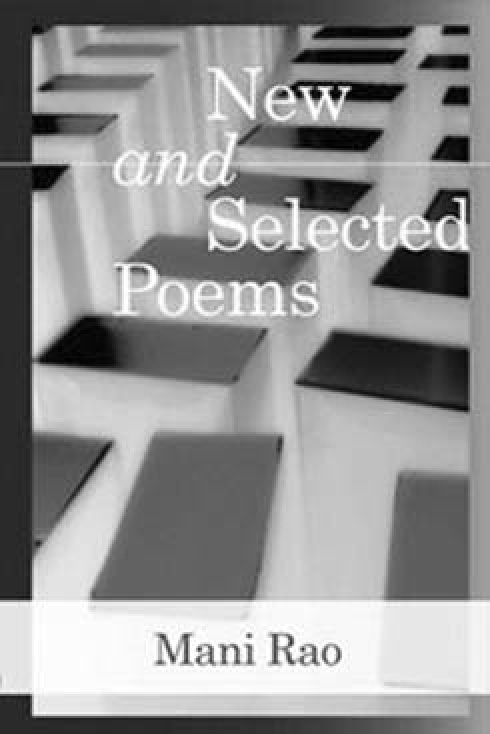 The book with the yellow cover arrived in a thick yellow envelope on a Sat-urday. It was mid-December, and winter in Delhi was late, though the days had started growing shorter. Over the next few days, I carried it around with me, reading it everywhere I could: in the metro, at work, in bed, and in the bathroom. There were 84 poems, almost all in unrhymed free verse in contemporary fashion; most of them quite short—some even only five or six lines—yet, they completely eluded my powers of comprehension. It was as if I had encountered a language so different from the ones I am familiar with that there was no way I could penetrate their meaning.

To begin with, let me discuss the book’s greatest fault: it has no organizing principle; at least, none that I could discern. The poems follow each other in a seemingly random fashion, as if tumbling out from a tear in the bag of the writer or publisher. Individually, some are humorous;
Four in the audience at Marshalltown Public Library.
The librarian, the lady who laid out cookies, and a brave couple
Out on their first date. I did the love poems; they bought a book.
—‘Iowa Romancing’

Some surreal:
It may be early unlit but the birds have begun to boil buds
are growing wings and the trees will rise featherborne
…Chirping chandeliers will swing in from the sky in time for dusk \
—‘So That You Know’

A few wry, ironic:
Yes passion dies, nobody warned me
The penis grows to the same length
in desires of all degrees
—‘A Geological Thing To Happen’

And, at least one, that’s bathetic:
She notices him
He has flowers
She crosses the street to meet him
There is going to be a reconciliation
She is run over
—‘He Looks At Her’

It is needless to say that individually, all the poems are rather startling. As Vivek Narayanan writes in the blurb, ‘Rao has been cutting her own fiercely singular path through the thickets of our language’. She has been a visiting fellow at the International Writing Program at the University of Iowa, and her skill, style and singular voice stamps every poem. In fact, her style is so singular that it is impossible to mistake it for someone else.
Yet, such an appraisal is insufficient for a review. The question remains: What do all these poems together sum up to? What is the meaning of this book? There is no helpful introduction by the writer or the publisher to explain why they have been chosen and arranged in this particular manner. But, towards the end of the book is a helpful acknowledgements section where all the magazines and anthologies in which these poems have been featured before is meticulously listed—along with their dates. It is with the help of this chronology that I was able to impose a critical structure on the book. Such an analysis also helped point out how Rao has been a part of almost all the major literary landmarks in Indian English literature over the past few years.
Three of the oldest poems in the book—’Big Big Flowers’, ‘My Mother Came Home One Day’, and ‘Singles Street’—were published 20 years back, in 1996. Then, in 1997, came ‘My Mistress Uncoils’; along with ‘Singles Street’, it was published in Debonair, a magazine that has played the same role in Indian English literature as its inspiration Playboy did for American literature—finding a place of high-quality literature on its pages, along with the more famous nude centre spread.
In both these poems, Rao uses a sort of anti-narrative shorthand, compressing images and meaning into a few short sentences. These are short poems; almost impatient to get on with it; to say what needs to be said, and then stop, the reader be damned if they can’t get it. In ‘My Mistress Uncoils’, the poet uses the imagery of snakes: ‘Dark inside the closed/snake basket/Still/though they slide’. It is an imagery that is used again in ‘My Mother Came Home One Day’ (1997):
I was the baby who never cried
The snake on your breast
who stung you dry
The vicious pet
and yet you held

The image of the snake or the serpent has been traditionally used in Euro-centric poetry as a metaphor for the male genitals. Rao seems to be appropriating it to suit her gender politics. In these early poems, the consciousness about the human body and its experiences is informed by the philosophy of the Écriture féminine writers from the mid-1970s. Hélène Cixous, who coined the term, argued in her essay ‘The Laugh of Medusa’ (1975), that language was not a neutral medium. On the contrary, it was phallocentric, and thus banished the experience of women, by suppressing their sexuality. The feminine experience, and in turn women’s writing, was essentially cyclical. Rao uses this philosophy in the most subtle, almost imperceptible manner. The snakes that uncoil in a basket are linguistic, the narrator sucks language out of her mother’s breasts.
This realization immediately granted me a visa to Rao linguistic territory. It was no more an alien thing. Like linguist Louise Banks, the protagonist of the film Arrival, I was suddenly granted access to the powers of Rao’s cyclical language.
Polish theatre practitioner Jerzy Grotowski in his book, Towards a Poor Theatre, claims that the only pure form of theatre is poor theatre because rich theatre is a theatre of ‘kleptomania’. Rich theatre
continuously appropriates and steals from other art forms like literature (drama), fine arts (sets and costumes), music and dance; poor theatre is forced to exploit itself to
create any art. Poor theatre is pure theatre. For an actor, Grotowski has the following advice:
The actor’s act—discarding half measures, revealing, opening up, emerging from himself as opposed to closing up—is an invitation to the spectator. This act could be compared to an act of the most deeply rooted, genuine love between two human beings—this is just a comparison since we can only refer to this: emergence from oneself through analogy. This act, paradoxical and borderline, we call a total act. In our opinion it epitomizes the actor’s deepest calling.
What Grotowski is asking the actor to do is to make herself vulnerable, as in the act of a deep relationship of love.
Rao’s invitation to her readers is somewhat similar. One of the primary concerns of her poetry seems to be discovering a new language, new words. It is perhaps a legacy of translating/transcreating the Bhagavad Gita and Kalidasa as modern poems. So, it is not uncommon to find something like this:
Eyes at the back of the neck
Tongue jetty
Airaudience
—‘Pupa’

Such writing not only eludes the limitations of meaning, but also transcends it. On encountering such writing, one is jolted out of the comfort of comprehension, and compelled to take the risks to which Rao invites us, seduces us.
Perhaps no other poem does it better than the last—and the longest—one in this book: ‘Cuntree’. The title of course is derived from an urban slang for a tree which has growths on its bark representing the labia majora. (Note: how the concerns have moved from the male organ to the female one.) First published in 2006, the poem begins: ‘The real question today: will an immigrant fight against her home-cuntree?’ The concern seems awfully contemporary. With Brexit, the election of Donald Trump to the US presidency, and the rapid erosion of a culture of liberal globalization—along with a rather acrimonious debate over nationalism in our own country—the experience of Rao, who has spent years living and working abroad is compelling.
Now, in this strange and uncertain new world into which we have been plunged, poetry such as Rao’s might be a universal tongue we can all share.

Uttaran Das Gupta is a journalist with Business Standard, New Delhi, where he frequently reviews books and films. At present, he is working on his novel, Hungry. His poetry was shortlisted for the Raedleaf Poetry Competition 2016 and his short stories have been shortlisted for Juggernaut Short Story Prize 2016 and Open Road Review Short Story Contest 2016. His book of poems, Visceral Metropolis and a murder mystery, Ritual, are forthcoming.