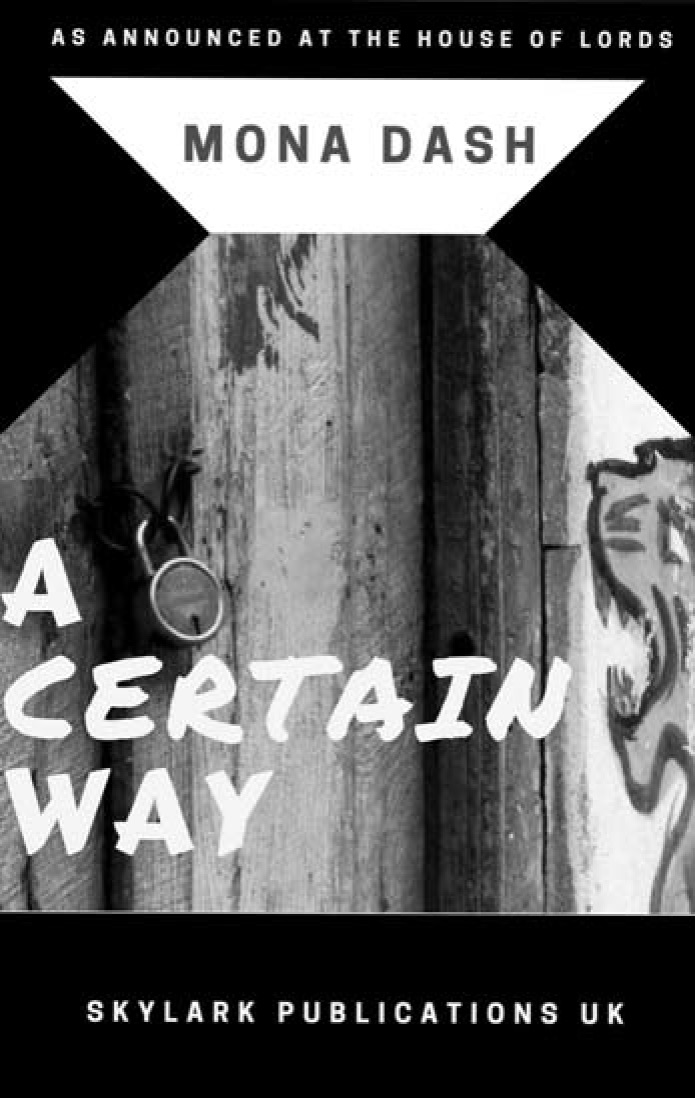 A Certain Way is an interesting debut in more ways than one. For Word Masala Foundation and its publishing wing Skylark Publications, this is the first time that they have employed crowd-funding as an innovative method of raising finance to fund a book’s publication. It was clearly a successful venture; the outcome is a well-presented paperback—a first collection of poems by ‘Word Masala New Voice Award Winner’ Mona Dash.

The book’s opening piece is also the title poem, ‘A Certain Way’. It gives the narrator’s definitive statement about her position as an immigrant: society may put pressure on the immigrant to behave in ‘a certain way’, but Dash would steer her own course:
soothed by the nourishing cool green
of the land I live in,
energised by the glowing orange sun
of the land I come from.

She clearly knows her mind and wants the best of both worlds:
Uproot, grow, take root
parallel truths, a little of this,
a little of that.
For an immigrant,
there is no certain way to be.

In one sense, the book carries an important message: there is no one immigrant experience, there is no one perspective, we are individuals, we have parallel truths and lead parallel lives.
Indeed the same immigrant can have very different experiences at different times and locations. In ‘Belonging’, the author writes of not fitting in; in neither of her worlds does she belong. In ‘a crowded English pub’, she feels that the bartender is silently telling her: ‘You shouldn’t be here.’ In her hometown too, she sits ‘ill at ease’ as her own voice silently tells her: ‘You shouldn’t be here.’ In ‘Rejection’, a poem that deals with a very familiar subject for poets, she is even more direct:
The Land I come from
says sorry, we want to be more than what we are.
We can’t have you, as you remind us of us
you stink of the familiar.

The land I live in
says sorry you are not smelling enough of
the land you come from, you remind us of us.
You need to be more different.

She speaks from experience and there is a compelling authenticity in lines that describe the ‘chocolate covered prickles’ of publishers’ rejection letters with which many of her fellow immigrant poets can identify—letters that are ‘consistently polite, / meaningfully rude.’
Like many expatriates, Dash is nostalgic at times. Indeed, one of her poems is titled ‘Nostalgia’ and another ‘Nostalgic Rain’. In several poems, it is rain—and specifically Monsoon rain—that symbolizes the country left behind and a nostalgic looking back to ‘when clouds break and it’s monsoon / in India, the heat of the plains dissolving in the waters. / The smell of long ago, the smell of home’ (‘The Immigrant’s Song’). But she is also a poet who has not lost her way; India is her past and, in the same poem, she recognizes her present under ‘different skies’; and her new country with its ‘rainbow gardens … becomes home, as well.’
If rain in England and its resemblance to, as well as difference from, rain in India, is a significant image of ‘home’ for Mona Dash; so also train travel—in childhood in India and during adult life in the West—is symbolic of the different journeys of her two worlds. ‘Konarak Express’ presents a charming vignette from childhood of a train journey with parents. The thirty-five stops between Bhubaneswar, the capital city of Odisha in eastern India, and Bombay (present-day Mumbai) on India’s western coast, taking ‘thirty-seven hours and fifteen minutes’, is a journey ‘from East to West’. For the reader, it foretells a longer journey in adulthood from the East to a different and more distant West.
‘The Passage of Time’ presents a Eurostar journey from England to France, its speed (‘fleeting across countries’) in sharp contrast to the leisurely ‘trains of yesteryears’, among which Dash fondly remembers the ‘trundling’ Konarak Express, trains that ‘carried wonder’. If Eurostar is ‘smokeless, noiseless’ and only ‘a mild vibration’ gives a clue that one is on a train, the present-day ‘Docklands Light Railway’ is ‘unmanned at the helm’, moves ‘efficiently’ and ‘only a lurch at times’ tells the traveller that they are on a train.
A Certain Way also contains poems that explore religious, spiritual and mythological themes. Dash finds it ‘comforting / … to see Shiva in this land’ and know that ‘the all-pervading / everything of Shiva’ is present in England, as much as in India (‘Shiva’). ‘Metamorphosis’ interprets the Narcissus story through the medium of Salvador Dali’s painting ‘The Metamorphosis of Narcissus’.
A number of moving poems are on womanhood and motherhood. In ‘Woman’ Dash asserts her solidarity with women the world over:
Always, a different name,
a different country,
a different life.
But the same I.

Love is a crucial theme running through Dash’s collection, as important as her focus on the diasporic situation. Many kinds of love are celebrated in her poems—the love between man and woman, a mother’s love, love for a father, love for a vampire, cynical love, wistful love, sensuous love, spiritual love and love that is lost. Love is a difficult subject to write about with originality, but I applaud Mona Dash for essaying it with courage and flair. In the fine poem ‘Happiness in Love’, Dash speculates on what expression gods and yogis would give to their joy in love, but asserts that human love can grow close to perfection:
You are you, I am I
a mere man, a mere woman,
we hurt, we pleasure
we try everything
to be closer together
to keep the oneness
as long as we can
with candles, aroma, tantra.

Sometimes I think,
in our happiness
we are almost there.

Many a first generation British Indian writer has commented on their diaspora experience—in poetry and in prose—and indeed some have done so memorably. While I welcome this first collection that adds to this growing body of literature, in my view, its author’s true forté lies in her intimate poems of connectivity. It is in these poems about personal relationships with people, places and traditions that emotions surface with authenticity. There may not be many answers in these poems, but Mona Dash does ask the right questions.

Debjani Chatterjee has experience of industry, teaching, community relations and art psychotherapy. With over 65 books, including Namaskar: New and Selected Poems, she is an acclaimed international poet, children’s writer, editor, translator, storyteller, and Olympic torchbearer. She is also Patron of Survivors’ Poetry and an Associate Royal Literary Fellow. Her many awards include an MBE from the Queen and an honorary doctorate from Sheffield Hallam University.